The EDM festival was a suitable sendoff for a summer that saw the return of live music to Chicago. 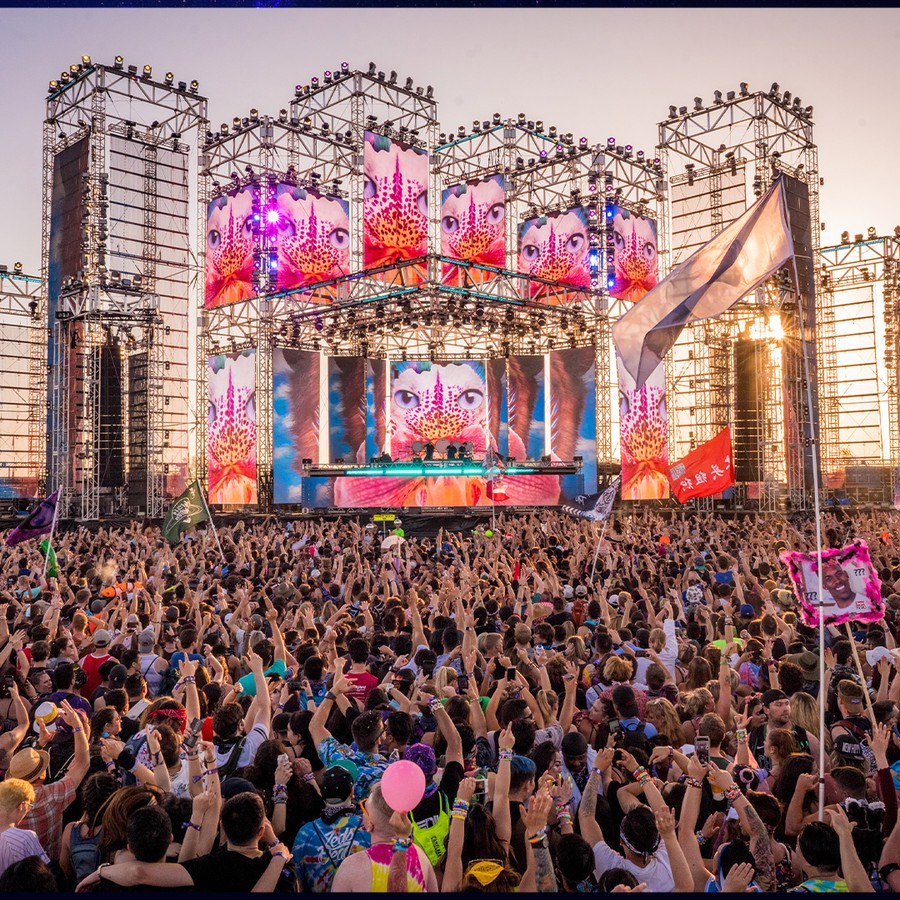 One of the many performances at the Spring Awakening festival in Chicago this fall.

Electronic dance music (EDM), maybe more than any other genre, insists on scale. Dillon Francis’s discography is compelling enough coming through your Apple earbuds, but you’re missing something essential if it’s not loud enough to rattle your ribcage. Head-bobbing along alone in your car is okay, but if you’re not swimming in a sea of glitter-flecked bodies, then you might as well just listen to Phoebe Bridgers. While last year’s festivities were not the most important thing taken from us by the novel coronavirus, or even anywhere near the top of the list, I feel for the fans who missed out.

The Spring Awakening: Autumn Equinox festival, held on October 2 and 3 at Addams/Medill Park in Little Italy, was an exciting, if somewhat damp, farewell to a summer that saw the return of live EDM in all its bass-thumping glory. Performers included Diplo, Excision, Martin Garrix, Zomboy, Galantis, RL Grime, AC Slater, Shiba San, and dozens more.

The festival grounds featured five stages of varying sizes, the most impressive of which was decked out with a pyrotechnic array that warmed my face from 50 feet away. An “electric beach” sponsored by Corona (the beer) let attendees mosh amid fake palm trees and heaps of real sand. The sight reminded me of how much time has passed since jokes about the brand’s name were funny.

The festival’s first day was tragically abbreviated by reports of inclement weather that forced attendees to evacuate just a few hours in. We killed time until the evening, when, fortunately, things were back on. Predictably, the line to reenter was excruciatingly slow as anxious showgoers poured through the gates in a narrow time window.

But what waited on the other side was worth it. Speakers thumped and LED displays pulsed. The crowd undulated like the surface of a lake. The bass dropped again and again and again. My partner and I drifted slowly from stage to stage, soaking in the stimuli and pausing to dance whenever the vibe was right. Qlank, an artist I’d never heard of, built a particularly danceable beat on a sped-up version of Odd Future’s “Oldie” instrumental.

The rain returned on day two, but the lightning stayed away, so the show went on as attendees donned plastic ponchos and the festival grounds grew even muddier.

We huddled beneath a decorative arch with a few other thin-skinned types, and although we witnessed a few people taking shelter beneath upturned trash can lids, the vast majority of the crowd seemed relatively unfazed, keeping the energy up amid the downpour.

At one point, after the worst of the weather had subsided, we were making our way towards one of the stages. A visible gap in the crowd turned out to be the result of a small, muddy pond. As we shuffled around its edge, we saw a handful of people enthusiastically dancing in the ankle-deep water. EDM is not a spectator sport—the fans are as much a part of the show as the pyrotechnics—and Spring Awakening’s sodden revelers did not disappoint. By the end of the night, my boots—a fortunate choice of footwear—were caked with mud and bits of grass kicked up by our enthusiastic moshing.

I found the different acts blurred together in my mind, not only because of my unfamiliarity with most of them but because nearly all areas in the festival grounds were within earshot of two or even three of the stages. As we walked around, the sounds mixed to form a sort of auditory jungle juice. At any other festival, that would have been frustrating, but the sensory pandemonium only added to the lizard-brained glee of the experience.

Most of the acts de-emphasized the personalities behind the beats in favor of pure auditory candy. One notable exception was Madeon’s set on Saturday, which used the artist’s silhouette against a giant LED backdrop to great effect. In one memorable sequence, he was accompanied on the screen by a crowd of virtual doppelgängers, his own backlit outline blending in seamlessly with the rest.

The “hot vax summer” that we were promised never fully materialized. Chicago still has an indoor mask mandate, and the long-term future of the virus remains uncertain. Still, the return of music festivals this year, from Lollapalooza to Pitchfork to Spring Awakening, has been a welcome bit of normalcy and fun amid the chaos. I’m looking forward to next year.