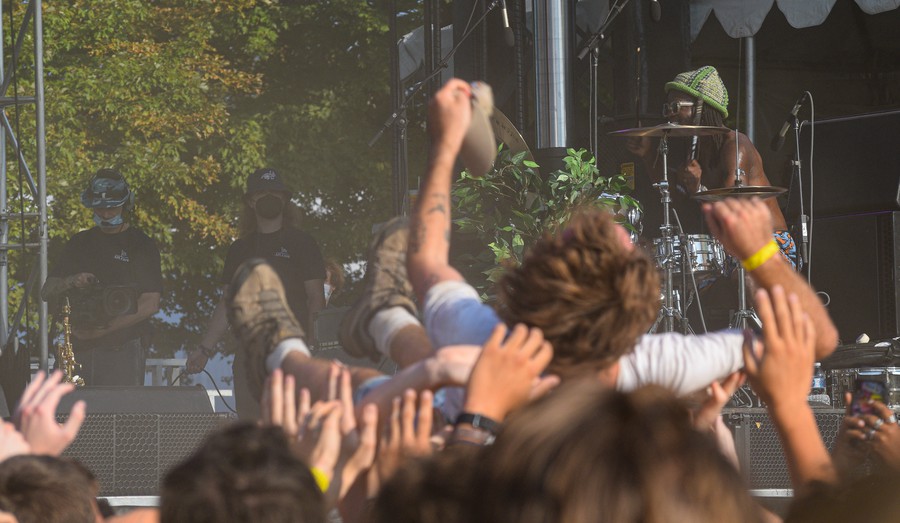 Pitchfork Fest drew a crowd desperate for entertainment after a year of all but devoid of it.

Boasting an impressive lineup featuring some of the biggest names in indie music today—Angel Olson, St. Vincent, Waxahatchee, and the ubiquitous Phoebe Bridgers—alongside perennial favorites—Kim Gordon, Animal Collective, Caroline Polachek, Erykah Badu—the festival, run by the magazine of the same name, prophesied a dramatic, monu-mental return to a post-COVID Windy City large-scale scene. Like Lollapalooza a month earlier, Pitchfork Fest drew a crowd desperate for entertainment after a year all but devoid of it. At every turn they were willing to put up with the trials and travails that naturally accom-pany forty different acts and 20,000 at-tendees, braving dust storms, the occa-sional technical misfiring, and roaming bands of fortysomething men entirely too old to pull off a skeleton onesie.

Local Chicago outfit Dehd helped kick the festival off with vocalist and bassist Emily Kempf commanding the stage as the group swept through an array of songs running the gamut from surfy lofi to postpunk yelps. Dehd, whose most recent album Flower of Devotion came out last summer, has steadily increased in popularity since their formation in 2015 and are now one of the most promising independent rock acts in the city today.

Further Sunday highlights included Hop Along, whose brand of folk-tinged rock drew a sizable midday audience, as well as the similarly-inclined Big Thief. Animal Collective, unfortunately, was a noticeable disappointment. The Baltimore group lacked not only energy but also the sheer volume to reach all the blanket-lounging concertgoers stretched out before the stage, delivering what was ultimately a collection of forgettable, if commendably soporific, downtempo electronic tunes.

However, the winner of the day—if not the festival—was either black midi or Phoebe Bridgers, both of whom reveled in their craft as few others did. black midi, a pseudo-jazz four-piece band and one of the myriad U.K. experimental post-punk groups to break onto the scene in the past couple years, slipped and sped out to the Merrie Melodies theme song, hefting a green (your humble narrator suspects Wayfair) sofa between them, and almost immediately burst into the sort of technical, orgiastic playing which has defined their sound since 2019’s Schlagenheim.

L.A.’s Phoebe Bridgers, her band members all outfitted in the same skeleton jumpsuit that adorned the cover of last year’s indie darling Punisher, ripped through a succession of old and new tracks, alternately illumined by reds and purples, oranges and yellows, greys and white. Wasting no time, she immediately burst into the hit single “Motion Sickness,” soon followed by the similarly upbeat “Kyoto”; she capped off the set with a rollicking performance of “I Know the End,” leading the crowd in jumping exultations—and just as imme-diately stalking off the stage.

Almost as entertaining as the music was the people-watching. To catalogue the ranks of disaffected kicked-around hipsters, art school slack-offs, beat poet rejects, steamy-eyed Goose Island advents, and those humble and beautiful souls who wanted nothing more than to document the Faye Webster Better Distractions Peach Lager would be a Sisyphean task, one left unaccounted for by this photographer. In light of the pandemic, every outing becomes a chance to newly prove yourself, or to remake yourself entirely, whichever you feel so inclined to on the day.

Other notable acts throughout the weekend included Faye Webster, who delivered a characteristically laidback, pleasant, and warm show, albeit one mixed entirely too quietly, and Flying Lotus, who played quite possibly the loudest set in the entire festival to an everchanging backdrop of psychedelic vortices. Chicago locals, Divino Niño, flexed their considerable chops in a wildly entertaining display of bilingual lyrics, ultra-danceable beats, and dreamy guitar noodling.

Unexpected guests also made an appearance—dream pop rocker, Angel Olsen, brought out her friend and collaborator, Sharon Van Etten, to per-form their duet, “Like I Used To.” Olsen in particular drew a large and vibrant crowd, one which understandably lost its mind when she played “Shut Up Kiss Me,” the poltergeist of Spotify playlists. The neo-soul talent, Erykah Badu, headlined Sunday—the only sold-out day of the festival—with an exuberant display of costumes, lights, and chrome show-pieces nostalgic for the imagined futures of yesteryear.

All in all, Pitchfork Fest provided a lot of hope for the future of post-COVID concert-going. It’s not perfect, and many of the rules seem to be made up as you go along, but it’s the best you can get given the present circumstances—and as we all learned again over the weekend, there’s nothing else like live music.