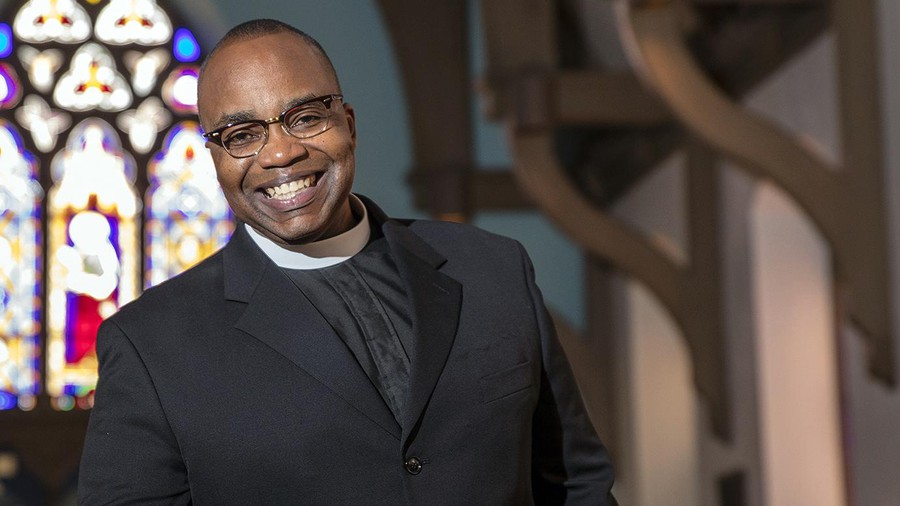 Reverend Maurice Charles assumed the role of Dean of Rockefeller Chapel in July of 2019.

As dean of Rockefeller Chapel, the Reverend Maurice Charles sees himself as a spiritual leader first and foremost. When people are hurting, celebrating, or asking questions about life, Charles is the first person they call. But he’s also used the position to raise questions about race and the role of policing at UChicago—questions which, as a Black man, he’s grappled with for his entire life.

Charles grew up in Cleveland, Ohio, in a family that was heavily involved in the church. His mother’s family had migrated to Cleveland during the first Great Migration and, according to Charles, left their past behind.

The election of Walker, a prominent member of the Ku Klux Klan, drove the family’s decision to leave. His family’s history and his own childhood in the 1960s shaped how he dealt with adversity early on, whether that was adjusting to a college environment as an undergrad or racial prejudice throughout his life.

“[My family’s] attitude was that you just stay focused. If you’re not welcome here, you find a better place, and you keep moving forward and you don't look back. And so that’s how I dealt with the situation as a student,” Charles said.

After high school, Charles attended Case Western Reserve University in Cleveland but struggled to find his footing during his first year. He sought out a non-denominational seminary where he could surround himself with scholars. That search eventually brought him to the University of Chicago Divinity School, where he received his master’s and his doctorate.

At Case Western, Charles said, “I had a great experience in my last couple of years. But it wasn’t that great upon entering. I was a first-generation, low-income college student getting adjusted. But when I came to visit Chicago for my master’s degree, I immediately fell in love.”

The first time Charles stepped onto the University of Chicago campus, he was attending Sunday service with his sister as they toured universities in the Midwest. He was in his 20s, a student at Case Western. While on campus, he had an informal interview at the Divinity School and asked his interviewer what kind of student does well at the University. That was when he knew he had found the academic haven he was seeking at UChicago.

“They said, Students who do well are tough-minded, strong-willed, and [those] who realize that whatever values you have, whatever values you cherish, if you make those ideas public, they will be challenged in the free marketplace of ideas.” Charles said, “Sign me up.”

One of Charles’ lasting impressions from this period was the lifelong friends he made; one of them walked across town last year at the age of 90 to give Charles cranberry-nut bread after his back surgery, he recounted with a smile. But this period was also pivotal for Charles because the University served as a guide as Charles mapped out his career path. He found mentors that led him to decide on what kind of clergyman he wanted to be and where he wanted to serve.

He spent six years at Stanford University as associate dean for religious life before being named dean of Rockefeller Chapel in July 2019. He is the first African American to hold this role.

Charles describes himself as a happy alum who has fallen in love with both the academic atmosphere and the physical campus grounds.

“The campus for me is a bit of a haven. I breathe a sigh of relief when I’m on the campus. It's a beautiful campus. And it's even more beautiful than it was when I was here,” Charles said.

This past summer, Provost Ka Yee Lee invited Charles to speak at a webinar entitled “Taking a Stand Against Racism: Our Shared Values and Responsibilities.” Charles described his experiences of being followed by police officers on campus and being stopped at campus apartment buildings. As a doctoral student, he remembers being stopped by UCPD on 53rd Street. Over time, he began to question the racial prejudices held by campus police.

“When I was young, I accepted being trailed by the police as just the cost of doing business in a major city,” Charles said. But “after a while, you get old. And you say, ‘Wait a second. What profile could I possibly fit, a man with a beat up Saturn [car] with a ton of books on his way to Regenstein library? I don’t understand how stopping me is going to solve any problems of crime on the South Side.’”

These experiences provide a framework for the work Charles aims to do as dean. His past work has looked at the intersection between religion and violence, as well as the difference between authorized force and violence when it comes to police force on civilians. This research continues to inform his approach as dean of Rockefeller Chapel.

“One of my first meetings as Dean, I wanted to meet with the [UCPD] chief of police because I need to address this head on because it's still with me. I was surprised [that we could meet], because while I was a student I was just focused on getting through the program and getting on with my life,” Charles said.

During that meeting, he learned that, in his student days, UCPD officers were not employed full-time by UCPD, and were mostly CPD officers moonlighting for the University. Since then, UCPD has increased the training of officers and tried to improve police-campus relations. Crisis-intervention training was introduced in 2015, along with expanded police training to try to help officers understand the effects of racial prejudices on their work and the community.

Despite this improvement, however, Charles believes that the state of campus policing is far from perfect, as he explained in the webinar.

“Does a university community require an implicit vow from its officers to enforce long-standing racial inequalities? Until that question is answered honestly by each and every member of this community, all talk of reform is meaningless,” Charles said in the webinar.

One of Charles’s main goals as dean of Rockefeller Chapel is to help everyone on campus have a fulfilling experience as he did as a student. He describes campus as a “sanctuary” and is committed to making all students feel safe and welcomed at the University.

Much of Charles’s work as dean involves working with students by providing spiritual and emotional guidance. As a chaplain, he sees himself as a resource in the community for celebration, for grief, and for difficult conversations. Many of the conversations he has had with students lately have centered around the feelings of isolation brought on by social distancing.

“I had these wonderful professors. I had this community of friends, and I’m just going to stay focused and keep looking forward. Now that I’m back here in this role, I feel some responsibility to address the barriers that [prevent] people…[from] enjoying this place as much as I did,” Charles said.