Student-athletes in the Class of 2021 saw their athletic careers interrupted and ended by an unprecedented pandemic. They managed to find closure in the relationships and memories that sustained their four years 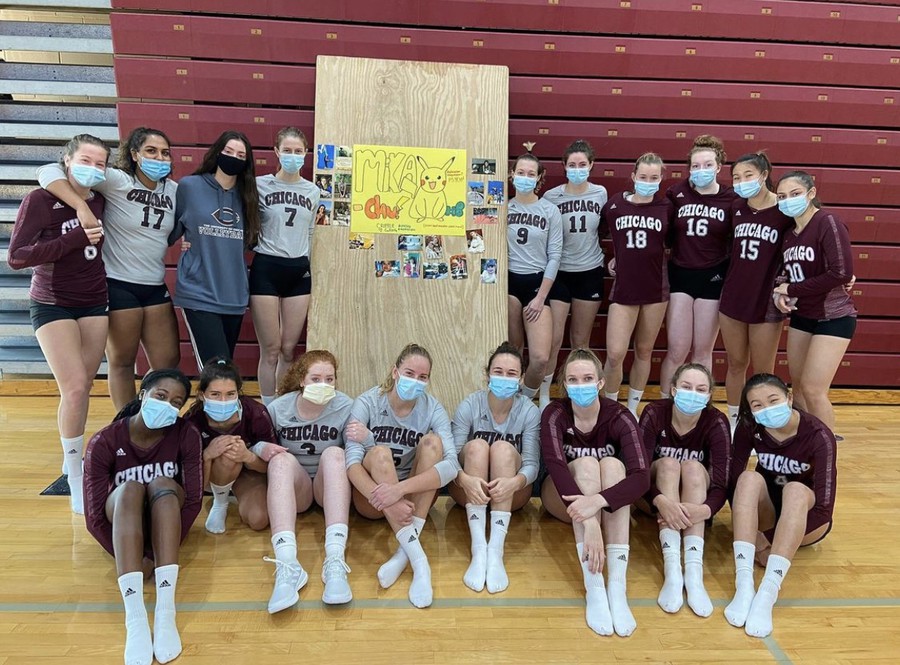 In lieu of traditional Senior Day ceremonies, teams celebrated their graduating players in masked and parred-down ways, like the women's volleyball team above.

The UChicago Class of 2021 has had a senior year unlike any class before them. The pandemic has affected all facets of University life, from academics to frat parties. But one of the most dramatic changes the pandemic caused was the cancellation of fall and winter sports this academic year. Student-athletes trying to cap off their careers with a great senior season were left at home, frustrated at the lack of games, matches, and meets.

When asked the best thing about being a student-athlete at UChicago, the most common answer from the graduating class was that sports gave them a family. Being set up with a group the moment you arrive on campus means that there is immediately a community for student-athletes, and it’s a community that lasts throughout the years. “We’ve all been through thick and thin with each other,” said Nadia Redza, a fourth-year on the women’s swimming and diving team.

Chloe Maciolek, one of the captains of the women’s soccer team, said that playing soccer through college helped her academically, as strange as that may sound. The exercise she got on the field was good for decompressing after long days of class. In addition, Maciolek noted that because the sports teams are made up of people with all kinds of academic inclinations, there are a lot of people to turn to for questions about classes.

“When I was looking for a major, and when I was trying to get through academically at UChicago, sports…helped a ton with that,” Maciolek said.

Dominic Laravie, who plays on the men’s basketball team, shared a similar sentiment about the different people he has met through sports teams. “People aren’t going to be the same as you, and that’s a good thing,” he said.

One morning last August, Maciolek had gotten a text from her coach, asking her if she could hop on a Zoom call. On the call, the coach broke the news: Their soccer season was canceled. The team would be lucky if they could get a few practices in.

Every fall and winter sport received similar news last summer, and it came as a surprise to few Maroons. After the spring quarter had turned remote in March 2020, the athletes in the graduating class had more than four months to watch the pandemic worsen and accept the harsh truth that for most of them, there would be no senior season. Laravie said that when it was announced that the basketball season would be canceled, the news was received with little emotion by the team. “I think the amount of time that we had to dwell on it…really helped us brace for impact,” he said. “It wasn’t a fresh wound.”

Maciolek’s cleats are now hung up for good at UChicago. Her last official game for the Maroons was in the fall of 2019, when the soccer players in the Class of 2020 also played their last game. The team is beginning to practice again, but, according to Maciolek, “the only people that are playing right now are the people playing in the fall.” Laravie is in the same spot. He said that joining the scrimmages, however fun, “would be practicing with no means to an end.” Still, though, he and the two other fourth-years on the team still join the weekly Zoom calls, both to catch up with old teammates and to introduce themselves to new ones.

This lackluster year has been enough to bring even the most positive student-athlete down. But the graduating class has come to the conclusion that the best way to deal with it is with resigned laughter. “I knew that it was going to come to an end at some point. That’s sort of just the reality of not being an NBA player,” Laravie said. Though admitting there had been “some tears behind the scenes” during the year, Maciolek shared a similar sentiment. Sports in college, especially at a DIII college, is really just what one makes of it.

Maciolek is grateful for the few matches she got from this season as well. “We were able to play some in fall, which was more than I could have asked for. I do think I got some closure from that.” What the fourth-years didn’t get in real games, Maciolek says they are hoping to make up for with their legacy. “In years to come, I like to hope [other student-athletes will say], ‘You know what, we’re running this fitness test today because two years ago those seniors didn’t get to,’” she said.

Redza has a similar mindset. “We just knew that the last year was going to be about us and how we chose to close out our careers,” she said. The swim team was able to practice in small groups a few times in November and in slightly larger contingents in the winter. In March, the team held an intrasquad meet to honor the fourth-years.

Some members of the team used the meet to try to put up a good time in their preferred event; Redza decided to try an event she’d never done before just for the fun of it. She appreciated the lack of pressure.

The senior meet was a great time, Redza said. The entire 65-person squad came out to cheer for the fourth-years by the poolside as they swam their events. Masks on, of course.

I had wondered whether the graduating class, resigned as they were, planned to continue their sports after university. The answer I received most often was a hesitant yes. Maciolek, who is going straight from UChicago to grad school, said that after she settles into her new surroundings, she plans to play “in a little club or indoor league or something.” Laravie is planning to play in men’s basketball leagues when he can, and he still watches both the NBA and college basketball on TV. He still loves his sport dearly. “It doesn’t go away,” he said.

Redza, who initially struggled to transition to other forms of exercise when the swimming season was canceled, has gotten so used to running and doing gym work in her apartment that she plans for that to be her main form of exercise after leaving UChicago, at least for the first few years. For four years (give or take one pandemic), she was an athlete at UChicago. Now, she’s doing “what normal people do, I guess.”