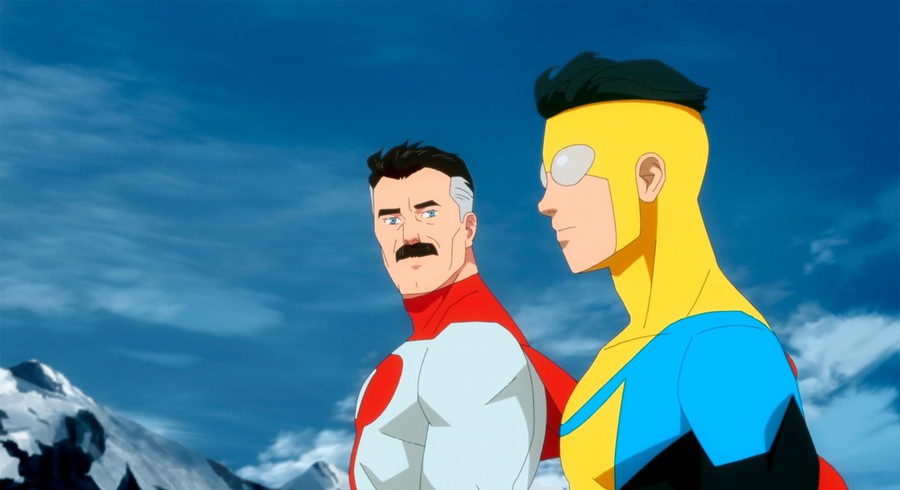 "Invincible" purposely sets up superhero tropes only to subvert them in creative and gory ways.

I am sick and tired of superheroes. My issue with the superhero genre is not that it produces substandard entertainment, but that most superhero films and TV shows feel monotonous and repetitive. They have completely saturated the market to the point where most contemporary Hollywood blockbusters are based on a comic book hero. It all feels so wash, rinse, repeat. With some rare exceptions, every single superhero property produces the exact same lifeless movie. So when I say that Amazon Prime’s Invincible is one of the best shows of the year, you should pay attention.

Invincible is an animated superhero show created by Robert Kirkman, the writer behind the eponymous comic. The show stars Steven Yuen as Mark Grayson, a high-schooler who develops superpowers shortly after his seventeenth birthday, leading him to train under his father Nolan aka Omni-Man (J.K. Simmons), and become the superhero known as Invincible (cue title screen). On paper, this sounds like a generic superhero show, like The Flash or Arrow, and for the first 30 to 40 minutes or so, it seems that way as all the tropes you would expect are thrown at the audiences. For example, the show opens with a pair of blue humanoid clones known as the Mauler Twins (Kevin Michael Richardson) attempting to kill the President, only for the Guardians of the Globes (this show’s version of the Justice League) to stop their dastardly plans. Another overused cliché: Mark is the typical nerd in high school that gets beaten up by bullies only to use his recently acquired powers to stand up to them (a-la Spider-Man).

However, that’s what makes this show brilliant: it purposely sets up these superhero tropes only to subvert them in incredibly creative and usually gory ways. For instance, the aforementioned fight scene with the Mauler twins takes a dark twist when it is revealed that Omni-Man brutally slaughtered every single member of the Guardians to weaken Earth’s defenses.

Still, the show’s violence never feels gratuitous; it is always in service of its mature story. The show isn’t being violent simply to be dark or edgy (cough Zack Snyder’s DC movies cough), instead using its plot to subvert the superhero genre. As Mark comes to realize in his adventures, being a superhero isn’t as glamorous or clean as the Marvel movies; people get hurt, and often really badly. There are numerous scenes where Mark is completely covered with blood either because he’s been brutally beaten or because a group of innocent civilians died in front of him. You can clearly see that these encounters take a toll on Mark, both physically and mentally.

Not only is the show’s violence used to subvert expectations, but it is also used to flesh out interpersonal relationships and characters. This show is driven by its characters, and because most of the characters are both well-acted and well-written, we become invested in their stories and struggles. When the show becomes incredibly violent and gory, we become fearful for the characters’ lives. For example, my favorite use of violence and gore comes from the final episode where Mark is beaten mercilessly by Omni-Man after he reveals to his son that he is a double agent for the evil Viltrum Empire. Frustrated that Mark refuses to join him and would rather protect the humans, Nolan beats him to the point where Mark can barely breathe. Yet he can’t convince himself to deliver the final blow because, no matter how much he denies it, Mark means too much to him. When Mark calls him “dad” for the final time, Nolan abandons his mission and leaves Earth in tears. The balancing of gore with subversion, maturity, and tenderness genuinely impacted me.

As much as I love this show, I do have a couple issues. There were several moments where the animation felt visually janky and awkward, especially in Episode Four where Mark has to go to Mars to assist a group of astronauts in their mission. Additionally, a lot of the side plots introduced in Invincible don’t really affect the main story in any way, simply starting and ending without any satisfying resolution. While I understand that this show is primarily focused on the drama between Mark, Debbie (Mark’s mother), and Nolan, I really wish Kirkman put more emphasis on the side plots because I was deeply invested in most, if not all, of them. For example, one side plot involves a superhero named Robot (Zachary Quinto) falling in love with a Benjamin-Button-like superheroine named Monster Girl (Grey DeLisle). While strange, I ended up invested in this story and was disappointed when it abruptly ended and returned to the main plot.

The abruptness of the subplots belies a bigger issue I had with the show’s side characters, chiefly Mark’s best friend and girlfriend, William (Andrew Rannells), and Amber (Zazie Beetz) respectively. While they are largely well-acted, these characters are so inconsistently written that it genuinely frustrated me. Although William fulfills his role as the funny comic-relief character, there was a particularly dark and emotional moment in Episode 6 where William witnesses his college boyfriend being turned into a mindless cyborg by D.A. Sinclair (a That Kid played by Ezra Miller), and then blames Mark for not arriving in time to save both him and his boyfriend. However, by the next episode, not only has William completely gotten over this horrific event, but it doesn’t seem to have scarred him in any way.

With Amber, that inconsistency becomes even worse to the point where she becomes unlikeable. For most of the show, Mark struggles to balance being both a superhero and spending time with Amber. Amber is understandably upset with this, yet Mark knows he can’t do anything about it because he can’t reveal to Amber that he’s Invincible. When Mark finally does reveal to Amber that he’s Invincible after surviving the D.A. Sinclair cyborgs, she simply responds by stating that she’s known that for three weeks. The writers play off this moment as another subversion by showcasing how smart the love interest is, but when this moment happened, it only left me confused. If Amber had known that Mark was Invincible this whole time, why was she giving him such a hard time for being late or not showing up? Why did she break up with him in Episode 6 for “abandoning her” even though he basically saved her and William’s lives from the cyborgs?

Despite some of the show’s flaws, I nonetheless thought this was an amazing first season and I can’t wait to see where Invincible will go with Seasons 2 and 3. If you haven’t seen this show yet, I suggest you give it a shot. I promise that it will be well worth it.