Smoke and Mirrors: Reflecting on Nicotine Culture on Campus

While cigarettes may feel like relics of a bygone past, nicotine is alive and well on campus—we need to ask ourselves why. 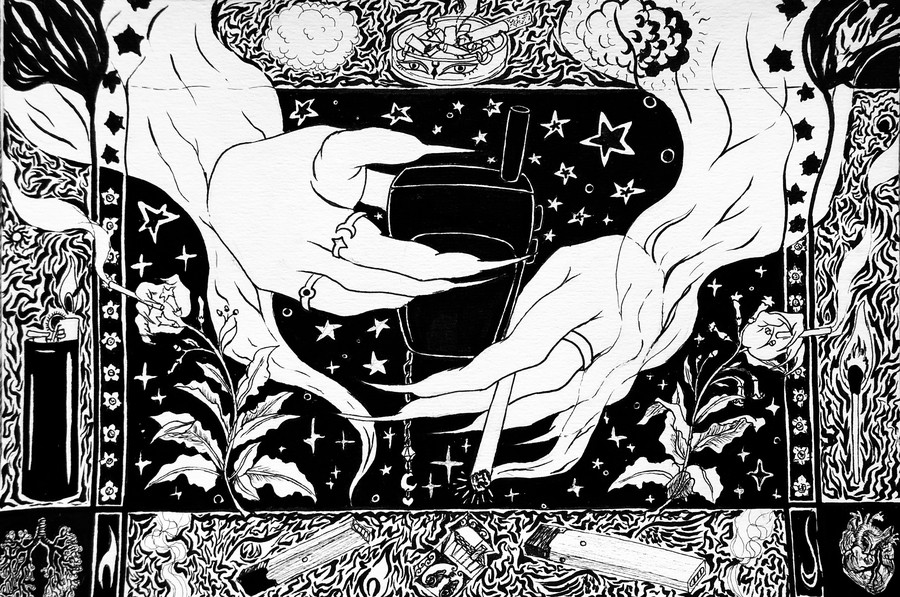 During finals week of my first quarter at UChicago, I found myself utterly overwhelmed. Jotting down the various tasks I had to complete before packing and boarding a train to New York the following week, it seemed that no amount of effort would get me through the quarter unscathed. I laid face down on the floor of my dorm room struggling to come up with something to say about the Epic of Gilgamesh for a final paper due the following evening. On the verge of panic-induced tears, I stepped outside, blessed my lips with a Marlboro, and took a sharp drag. My feet lifted off the ground as I was compelled upward by a wave of pleasure. Suddenly my worries were replaced with joy, confidence, and tranquility. The cold Chicago air seemed to whisper in my ear, Everything’s going to be okay.

For many young people, smoking may seem like a foolish relic of the past, relegated to the ignorant, reckless, or “edgy.” And it’s true that a mere 4.6 percent of high school students regularly smoke cigarettes, representing one of the lowest rates in American history. But this oft-cited statistic is incredibly misleading if used to suggest that most young people in America are off nicotine forever. As of fall 2020, 34 percent of U.S. college students smoked cigarettes, and 71 percent had used e-cigarettes in the prior three months.

We all know the endless number of health risks associated with smoking. Even without all the additives in cigarettes and vapes, nicotine itself––the whole point of all of this inhaling––leads to “cardiovascular, respiratory, [and] gastrointestinal disorders.” Yet these massive risks ironically become reasons that some people want to smoke, as counterintuitive as this may seem. So here, I’ll completely leave the health risks behind as we explore the reasons why people smoke in the first place and why I believe we should all cut down as much as possible.

For something so clearly linked to major health problems, there must be (and believe me, there are) tangible, compelling reasons that people still smoke. And as it turns out, these reasons make members of the UChicago community especially vulnerable to nicotine addiction. The experiences that my friend had in dealing with her nicotine addiction after moving to the U.S. and starting college here demonstrate why smoking poses such a danger to UChicago students.

Mere days before my friend came to campus this fall, her father found her Juul. For the purposes of this column, I’ll call her Alice, though this isn’t her real name. Alice was terrified anticipating her father’s reaction. As the slick smoking device dangled over the kitchen trash can, Alice’s mother interjected, “Can I try it?” Tentatively, she inhaled, then exhaled, “Oh my God, that’s good. Can I keep it?” Growing up, two things were clear in Alice’s mind: The overbearing hypocrisy of her nicotine-addicted parents and the belief that smoking couldn’t be all that bad––after all, her parents indulged. Especially in the Eastern European city of her youth, where if someone suggests a smoke break at the bar the entire group will shuffle outside excitedly, it’s easy to consider smoking to be a completely normal thing, not unlike drinking coffee. As Alice told me, “It’s just a habit you have, and it’s a very social thing.”

Soon after turning 18, in the midst of easing quarantine restrictions following a frantic spring, Alice moved into an apartment alone, and smoking became an increasingly large part of her life. Cigarettes and Juuls represented the idea of complete freedom over her actions and body. Alice could now do whatever she wanted, even if it literally killed her, puff by puff. Her parents could do nothing to stop her.

Quickly, smoking crept into nearly every corner of her newly established life. Alice used nicotine as an excuse to socialize, to deal with her emotions, to get rid of boredom, or simply to more fully enjoy a lazy, Sunday afternoon. She found nicotine to be useful in these different areas of her life and, of course, to be a great source of pleasure and relaxation during an incredibly unstable time. Yet the tides of addiction soon imperceptibly rose. When asked to abstain from smoking for 30 days before a surgery, Alice found it nearly impossible and stopped smoking just two days before the operation. For the first time, she began to realize that she might not be fully in control.

But with college just around the corner, Alice had little time to consider or change the role that nicotine rapidly took up in her life. She noticed a much more judgmental environment regarding smoking here on campus compared to back home, and so began to see it as more than a simple habit. But there were still many areas in her life where she found it helpful to continue smoking. The two reasons to smoke most relevant to UChicago students, many of whom mold ambitious academic goals and mental health struggles into a personality, are academics and mental health.

It’s no secret that academics at this school are demanding. Students here have high course loads and even higher goals. Especially coming to UChicago right out of a mind-numbing quarantine, I found it very difficult to shoulder the constant work that was expected of me. I bought my first pack of cigarettes for a very silly reason: I had plans to go out with a girl from Europe, and I wanted to casually offer her a cigarette of her favorite brand. Yet on a particularly stressful week that followed, one that left me tearing my hair out over proofs and physics equations, I found myself drawn to the remaining cigarettes left on my bookshelf. Alice says that “when [she’s] stuck and needs to take a one-minute break” smoking offers the perfect opportunity. After hours of studying, with little time to pause for breath, a cigarette suddenly becomes a way to reward yourself and reset your brain for the hours of work still to come.

This use of nicotine is even more pronounced with e-cigarettes, as you don’t even need to leave your room. Alice describes her experiences studying with a Juul (i.e., her typical night of studying) as follows: “[Having a Juul] would make studying much easier because I would study, study, study for like, half an hour, and then I remember, ‘Oh, I have a Juul on me.’ And then I would hit it.”

But, of course, nicotine is incredibly addictive, and you’re never satisfied for long. In my experience, these short breaks, originally intended to help me study for longer periods with fewer interruptions, became more frequent until I was studying with a vape on my desk as if it were as necessary as a pen and paper. I was arrogant and naive; I thought that I was different, that although nicotine is addictive, I would be able to use it as a tool. Yet this wasn’t the case at all. I soon, much sooner than I expected, found my constant cravings getting in the way of my concentration, ultimately leaving me worse off than in the first place. Much to my disappointment, there are no secret tricks to studying for inhuman amounts of time, or at least this isn’t one. I tricked myself into thinking that I could bite off more than I could chew without any consequences. And yet I found myself choking, nonetheless.

In addition to studying, Alice also finds smoking to be very useful in managing her mental health. She says that this past year, if she “was in a very weird, anxious headspace, [she] would just need a break, so [she] would go outside and smoke a cigarette and walk around.” Much like Alice, cigarettes have ostensibly helped me through moments of intense stress, like the anecdote I began this piece with. Yet nicotine is an incredibly temporary distraction. Sure, a cigarette may take your mind off of whatever’s causing you distress for five or so minutes. But once you flick the ashen butt into a garbage can, you’re right back to your life until you light up again, distract yourself some other way, or find a way to actually deal with your problems.

It’s been demonstrated through recent research that the inability to regulate negative emotions is tied at the hip to a wide array of psychological problems. But you hardly need a peer-reviewed article to find compelling support for this idea. The more time you spend ruminating on negative thoughts, unable to bring yourself back to the present, unable to seek a solution to underlying issues or to find helpful coping mechanisms, the more time you spend building mental habits that are also symptoms of things like anxiety and depression. Alice herself reflects that when used to tamp down emotional pain, smoking can be counterproductive: “It can also exacerbate my mental health issues because when I go outside and listen to my smoking playlist [and smoke], I get sad because I start overthinking things.”

At its very best, smoking can be a Band-Aid fix to deeper issues. But at its worst, it can create a vicious cycle that intensifies psychological problems. If used to curb anxiousness, withdrawals and cravings can end up increasing stress and anxiety. And because nicotine decreases the release of dopamine in the brain, if used to curb depression, it increases both the symptoms that lead you to smoke originally and your addictive desire to smoke.

In the domains of academics and mental health, I sought a quick, easy, and pleasant way to make my life better, to become a better student and a more grounded person. But there are no quick fixes for these things. Alice says that she’s waiting to find some kind of replacement for the different areas that smoking helps her in: “I think somewhere deep inside, I don’t want to give it up because it helps me so much. Because it’s so many things in one.” But if seen closely and honestly, nicotine does far more harm than good, even when leaving physical health completely aside. And unfortunately for Alice, I don’t think there will ever be something that can be easily substituted for the ways that she and I used nicotine in our lives. Becoming the person you want to be––finding a healthy work-life balance and truly beneficial strategies to deal with the stressors of life––is a painstaking process. But surely, it’s worth the pain.

I hope that you see smokers with more compassion after reading this, and that if you smoke you go easy on yourself in trying to slow down or quit. Addiction is a difficult reality, and it can be incredibly hard to face head on. There’s no other choice, but you don’t have to face it alone. Friends are almost always more than willing to help, and there are professionals at Student Wellness trained to help you with smoking and any underlying challenges that may be making it harder to stop. I wish you luck.

Clark Kovacs is a first-year in the College