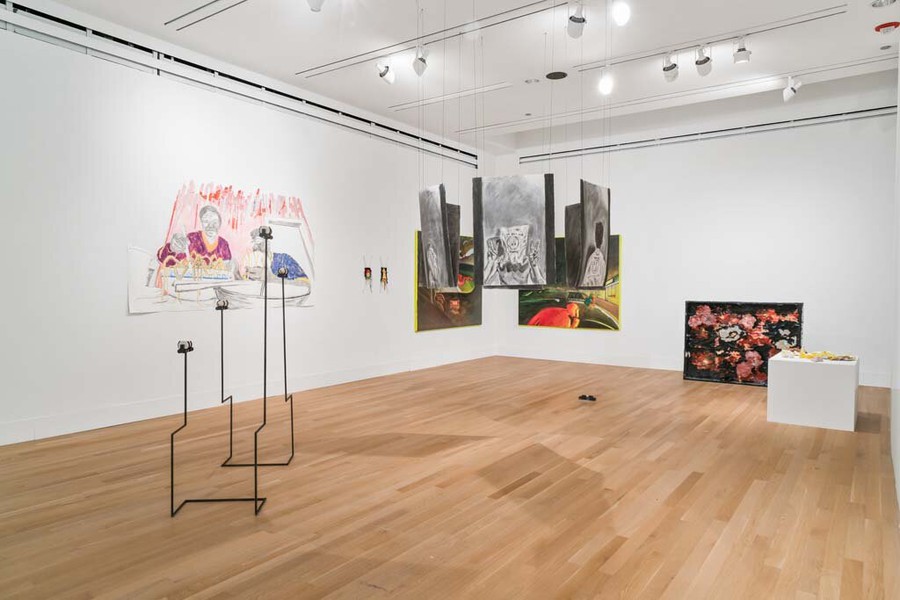 An installation view of "youre muted" at the Reva and David Logan Center for the Arts.

Currently installed at the Reva and David Logan Center for the Arts, this year’s B.A. Thesis Exhibition sits dormant as the campus population waits for the University’s stay-at-home order to be lifted, at the time of writing. Despite this, it is anticipated that as COVID-19 cases dwindle, the show will be open to students. Exhibiting work by Ana Liu, Andrea Grant, Ashanti Owusu-Brafi, Evelyn Shi, Everett Black, Hurston Wallace, Jessica Vanahill, Jon WuWong, Maggie Hart, Martin Girardi, and Yolanda Dong, youre muted comes after an unprecedented year in arts pedagogy.

Having been scheduled to welcome the public on Friday, April 9, the exhibition opening was postponed by a week as the University instituted a stay-at-home order in response to an outbreak of COVID-19 cases on campus. The lingering frat-party and travel-induced surge of infections led to the new April 16 opening being pushed as well. At the time of writing, it is hoped that students will be able to see their peers’ work in person by Wednesday, April 21, and that the exhibition will not meet the same fate as last year’s canceled B.A. and M.F.A. Thesis shows.

Even with some optimism that it will be seen by people in the flesh, youre muted does not put up any airs of pre-COVID normalcy: The very title and distorted, glitched-out promotional graphic speak to its conception and reception during a time that is highly mediated by Zoom and similar technologies. Despite this and the probably low number of in-person viewings in the coming weeks, the exhibition does include a myriad of works that reward close looking.

In speaking with a few of the exhibiting artists, it was clear just how much the experience of working through the last year of the visual arts major was diluted by the pandemic, despite some lucky allowances. Unlike previous generations, Class of 2021 artists could not share studio space and work together in the same way. According to some, the loneliness of asynchronous viewings and the awkwardness of virtual critiques made for some frustrating experiences and often dramatically different perceptions of the art. Naturally, this is also true of the exhibition they have diligently installed, which encompasses a wide array of practices, ranging from the sculptural to the painterly to the digital.

Maggie Hart’s assemblages, for one, combine found objects and hardware store media to generate highly affective and tactile experiences. Perhaps similarly to the way the Zoom tile came as a head-splitting, eyeball-drying perversion of the window, “Replevin” offers viewers a window frame that is degrading, mutating, corrupting. (However, this might be reading too much into the work through COVID-tinted sunglasses). Hart’s other sculptures also take objects that constitute the home, such as windows, chairs, and tables, and “disembowel” them, to borrow a word from the artist, upsetting their functionality within domestic space. In “Scab-picker,” a thin, shaky skeleton resists the weight of several oozy stalactites dripping downward as if to close a wound never left at peace. Directly referencing the University’s Student Disability Services homepage, “Appropriate reasonable accommodations” reifies the learning difficulties experienced within a structure built to cater to neurotypicality.

Ana Liu’s work, by comparison, veers somewhat from Hart’s: The three-dimensionality of sculptural work in space is collapsed to the illusionistic plane of the canvas, and a very tactile abstraction is supplanted with deeply contrived symbols. In Liu’s paintings and weavings, mythical, chimeric creatures are cast against the eternal dichotomies of light and dark, safety and danger, and others. Set in classic American suburbia, an archetypical drama unfurls. Here, a half-serpent, half-human figure reminiscent of ancient Greek Lamia lies prone under a beam piercing through the sky; and there, something between a deer and a snake is splayed out, bleeding before a damning pair of headlights. The artist’s diptych of paintings is done in oil on canvases primed with neon yellow instead of the conventional white, allowing them to glow from within even while depicting nocturnal scenes.

Influenced by ecocritical thought, Everett Black makes work that thinks through human and non-human ecologies, as well as the ways we relate to the environment. In addition to some more sculptural works incorporating materials like coyote skeleton and porcelain, Black also has a multimedia work on display which includes video and ruminates on perception and line. Meanwhile, Ashanti Owusu-Brafi also draws on natural materials such as skulls in addition to burnt canvas and human blood to create what the artist terms “sculptural collage” works that meditate on indigeneity and lineages, as in the work “Trust Totem (Generational Trauma Without The Ancestral Knowledge).”

In spite of the vast rift between viewing art online and looking at it in person, the work on display at this year’s B.A. Thesis exhibition offers compelling and thought-provoking experiences regardless of the viewer’s location.

youre muted was on display at the Logan Arts Center through Saturday, May 1.

Despite a pandemic, a stay-at-home order, and the absence of traditional critiques, this year’s BA Thesis Exhbition delivers strongly once again.