Dreams Become Reality "In the Heights" 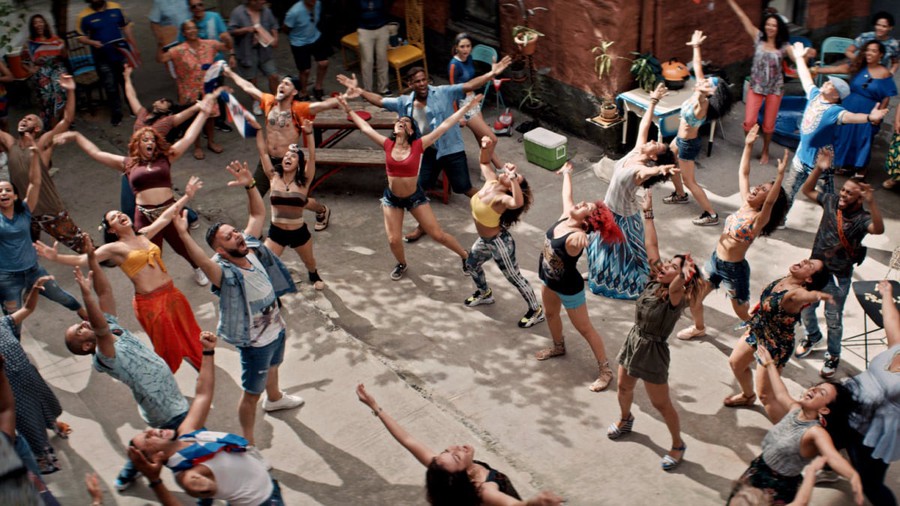 The cast of "In the Heights" celebrate the community of Washington Heights in "Carnaval Del Barrio".

Fresh off the heights of its original Broadway run, the musical In the Heights was supposed to be adapted into a feature film in 2011. A decade later, that possibility has finally become a reality. In the Heights, directed by Jon M. Chu (of Crazy Rich Asians fame) and produced by Warner Bros. Pictures, opens this June. The film, an energetic, music and dance-filled celebration of the Latine community, is primed to be Hollywood’s first real summer blockbuster in over a year.

For the cast and crew, the Washington Heights depicted in In the Heights has changed in the years since the musical’s inception, yet the story and heart of the community remain the same. In conversations with The Maroon, they discussed the importance of authenticity, staging a post-gentrification reality, and the challenges of adapting a Broadway musical from stage to screen.

One of the film’s opening numbers, “No Me Diga!” (“You don’t say” in English) runs through the intimate chaos of a local hair salon—it’s an exploration both of superficial beauty and gossip and of the trust and respect afforded to the women who work there. For Daphne Rubin-Vega (Daniela) and Dascha Polanco (Cuca), these salons represent an iconic hub of the Latine community. “It’s where women have, for as long as there’s been a diaspora, gotten together to do each other’s hair,” Rubin-Vega explained. “Grooming on the outside, temple on the inside.”

“Not everyone touches your hair,” Polanco said, “[and not] anyone gets to touch your hair.” Given the historical mistreatment of Black and brown women’s hair, it was especially important, then, to see In the Heights get its portrayal of the salon right. It’s just one example of the film’s commitment to authenticity—as Rubin-Vega put it, of giving the Latine community a story that “speaks to the soul.”

Gregory Diaz IV (Sonny de la Vega) recalled how this authenticity helped him realize the extent to which the film could influence audiences. When filming the dinner scene before the blackout, Diaz shared how Chu’s insistence on even the most minute details, including the look and taste of the food on the table, highlighted the film’s importance to Diaz. Like his character, Sonny, Diaz holds high ambitions despite his relative youth and a desire to give back to his community and help those around him.

It’s a mindset that some of Diaz’s older castmates, chiefly Olga Merediz (“Abuela” Claudia) and Jimmy Smits (Kevin), have held through their extensive careers. “You are enough. And trust that you are enough,” Smits said when asked for the advice he would give to his younger self. It’s something of a tough ask, given Hollywood’s tendency to pigeonhole Latines into stereotypes if not write them out of stories altogether. While theater has traditionally offered Merediz a little more flexibility, In the Heights might be the film that begins to break Hollywood’s bad habits. “Maybe this was the start of more Latine movies and more Latines’ stories being told,” suggested Merediz, “and a revelation that we’re just like everyone else. We’re part of the fabric of the United States. We love our families, we’re passionate, we’re hardworking, and we love our communities.”

In the Heights was also Merediz’s chance to reprise her Tony-nominated Broadway role of “Abuela” Claudia. She recalled feeling “so humbled and so proud, and so lucky that I’ve had this journey with this character.” Other Broadway cast members (Lin Manuel-Miranda and Christopher Jackson) also made cameos in smaller roles in the film. It’s not something Merediz would have imagined, to be a “theater actor doing their role in the cinema,” but in Hollywood, opportunities for non-white actors are rarely predictable. As Smits put it, “You have to be available and open, and say yes to the universe.”

Leslie Grace (Nina Rosario), Melissa Barrera (Vanessa), and Corey Hawkins (Benny) certainly approached their roles from entirely different places. The three recalled leaning on, and learning from, each other's different strengths and experiences: Grace comes from a storied music career, with a 2018 collaboration with K-pop group Super Junior being the highest level of choreography she learned before tackling In the Heights; Barrera got her start in Mexican telenovelas, which she called “bootcamp” as she worked seven days a week, learning 30 scenes a day; Hawkins, while familiar with acting in both films and plays, described his singing background as being “around the kitchen table with my grandmother.” Their roles came with technical pressure, as they were required to sing, dance, and act all at the same time, but more than that, there was the pressure of coming through and representing their community.

Barrera recalled it as “feeling like you’re going down a path that not a lot of people have been lucky to go down. Especially being people of color, it’s almost like new territory, [even though] it shouldn’t be.” The trick, for Barrera, was to let the pressure fuel and propel her, to “keep fighting to tell these kinds of stories that uplift our community and that are aspirational and that people are proud to see themselves in.” Grace echoed the sentiment, stating she wanted audiences to take away the value of having dreams from the film. “Big, seemingly small, they’re as magical as what you see [in this movie]. All our dreams [matter], no matter where you’re from,” Grace said.

Dreams are woven throughout In the Heights, from each character’s personal aspirations to the technical feats envisioned by Chu. Hawkins recalled filming “When the Sun Goes Down,” a duet between Nina and Benny, as a gravity-defying dance along the side of a building. “[Chu’s] vision was so grand,” Hawkins said. “It’s bigger than we even imagined, and the song ended up being a moment where [Nina and Benny] get to make reality, bend reality to what they want it to be and what they needed it to be for that moment.”

For Chu, this vision was why he wanted to make In the Heights; filming “When the Sun Goes Down” was about capturing what it feels like to be in love, or to say goodbye to someone you might not see for a long time, and communicating those sentiments with cinematic tools. “We wanted to give ourselves any rule we wanted,” Chu said. “If the desk wanted to move when you got angry, then the desk should move to the side.”

Some rules were harder to break. As dream-filled as In the Heights is, it’s also staged in a sobering post-gentrification reality; there’s no fighting the mayor, as Chu put it, just learning to deal with active changes happening around you. To him, it was about passing on a legacy to the next generation. “Our ancestors came here with bags in their hands, and they brought whatever they could bring. So, what are we as a generation going to bring forward – what’s in our bags? Because we can’t take all of it,” Chu explained.

It’s an ongoing question, and one that for Chu, an Asian-American director, often feels impossible to answer. For every step forward Hollywood takes, it feels like the real world takes two back. This past year especially has seen a frightening increase in Asian-American discrimination and attacks alongside historic events like back-to-back Oscars wins for Asian directors (Bong Joon-Ho and Chloé Zhao). Still, Chu is hopeful about the long game. “Nothing happens overnight,” he said. “We have to be realistic. There’s not one movie that’s going to change things. We have to have not one movie, not 50 movies, we have to have hundreds of movies and TV shows that repaint who we are, told by us.”

For Chu, his role as a storyteller is to press forward no matter what. He recalled pulling up to a studio gate more than once as a burgeoning director and being told, “Oh no, deliveries are over there.” Nonetheless, as a filmmaker, Chu realized it was up to him to help change those norms, to put people in front of and behind the camera who could provide perspectives different to those traditionally seen on the big screen. It’s an opportunity from which he can never turn away.

In the Heights is important in so many ways: It’s a chance for the Latine community to see themselves reflected on screen in a meaningful and heartfelt story; it’s a chance for generations of actors to get roles they were historically denied; it’s a chance to showcase universal themes and showcase Latines in an undeniably American story—because Latines are essential to the mosaic that is America. But it’s also more than that. As Chu put it, “If you like joy and happiness, and you want to feel alive again, and you want to feel hope again, our movie is for you. You will see the most spectacular musical numbers, from giant 600-people water choreography to a couple dancing on the side of a building that anyone, no matter where you’re from, will fall in love with.”