The Tour, which is held in various cities annually, offers a chance for young women to show off their baseball talents in front of scouts and meet others who share a passion for the game. 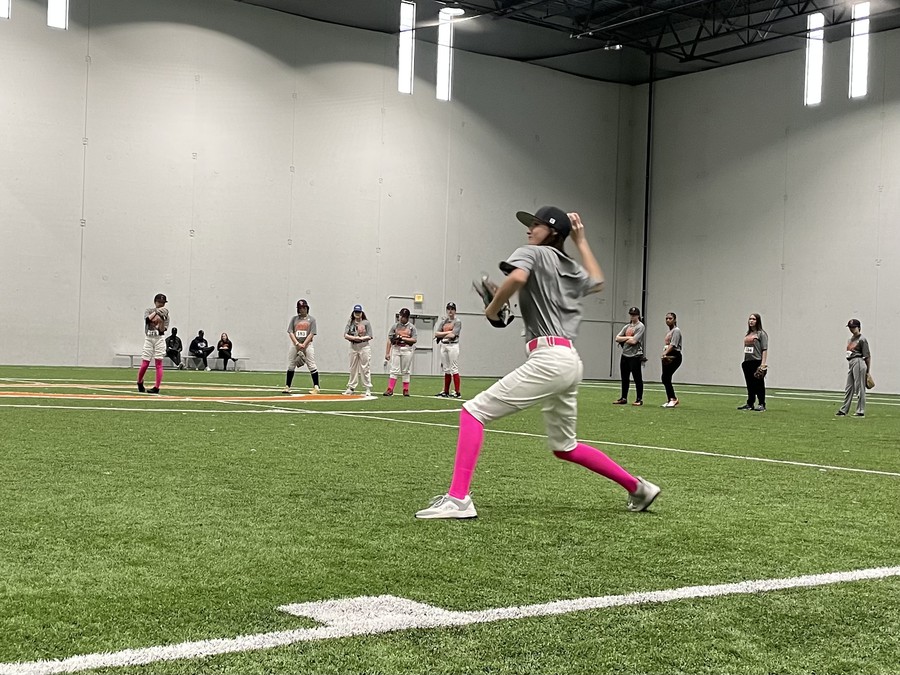 On Sunday, the MLB GRIT: Girls ID Tour hosted its final event of the year at the Pullman Community Center in Chicago. The Tour is a chance for local girls aged 12–18 to show off their baseball talents in front of developmental scouts, with a few earning invitations to play in competitive summer events like the Elite Development Invitational in Vero Beach, Florida. More than that, though, the tour is simply a chance for young women to play baseball with one another, which remains a rare opportunity even today.

Chicago was bright but typically frosty on the day of the showcase. Fortunately, the players were spared from the cold, as the event was held indoors at a facility in Pullman, a small neighborhood that lies about 50 blocks south of Hyde Park. The community center is an important spot for the South Side—locals can play soccer, basketball, and baseball inside for a small fee. The Girls ID Tour, having been funded by Major League Baseball (MLB), was free to attend.

The event mainly featured high school students—those who either play for their school squads or, if they are forbidden to play with the boys, local travel teams. Each player had a numbered sign taped to their shirt to make them more easily distinguishable among the evaluators. Many wore baseball caps; a few rocked bright dye in their hair. One wore a mask throughout the entire three-hour event.

A group of around nine players stood out—all were sporting the same hot pink high socks. They were attending the event together as members of the same local program, Chaneyville Baseball. Chaneyville’s girls’ team was no joke; although they’d only been founded in 2020, they’d won the Baseball For All nationals in the summer of 2021 and recently received a sponsorship from the Chicago White Sox. Coach and founder of Chaneyville Baseball Fred Chaney told The Maroon that the girls’ team was founded shortly after the program began with two different boys’ teams. A few girls signed up for the under-12 boys’ team, were accepted, and had a good enough time that they told their classmates and friends about the program. Soon, there were enough young women to form a girls’ team, who promptly won a national title. “The parents asked, ‘Can you consider keeping all the girls together?’” Chaney said. “So I did. And I’m very happy that I did.”

The first skill on which the players were judged was their speed. Each was timed with stopwatches as they ran sprints from home plate to first base, then from home to second base. A wide range of ages was on display at the event, but the younger players did not seem fazed. As the group moved on to fielding grounders and throwing to a base, it was they who seemed to throw the hardest and cleanest.

Parents looked on from the bleachers as the grounders turned into line drives and fly balls. It looked like fun: the ping sound of the ball being sent into the outfield by metal bats; the smack of ball in glove as the players snagged their flies. The girls laughed with each other, even as some balls got lost in the fluorescent lights and bounced away from them.

After the fielding drills, the players took batting practice. Each got five or six swings, as the MLB evaluators peered on from behind home plate to see how each player was barreling the ball. This was perhaps the most impressive-looking drill of the day—the coach who was pitching was throwing hard, and yet there was rarely a hitter who wasn’t banging line drives off the walls of the indoor field. 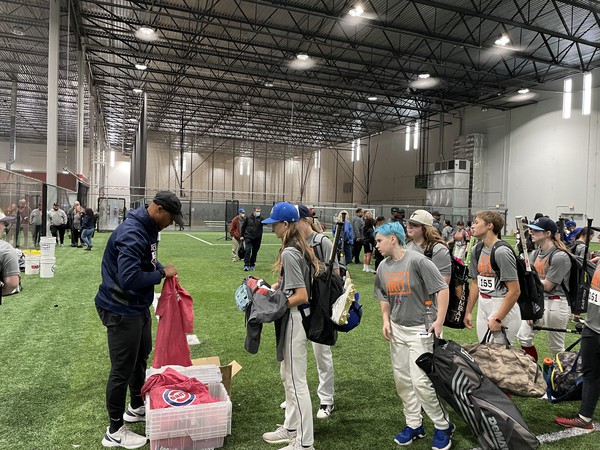 The players grab their T-shirts at the end the of the event.

“This kind of stuff did not exist at all when I was playing,” Sarah Padove, MLB’s manager of baseball and softball development, told The Maroon. Padove is from the Chicago area, or near it anyway. She grew up in Hammond, Indiana, and went to school at Marian Catholic in Chicago Heights. She played baseball and softball in various Little Leagues growing up but quickly transitioned to exclusively softball after finding female baseball programs extremely hard to come by. Padove’s story is a common one. Members of the U.S.A. Baseball Women’s National Team—the gold standard for national women’s baseball—have shared stories about how finding places to play baseball as a young woman was all but impossible. Even today, it continues to be hard to find girls’ baseball teams, let alone full leagues. UChicago, for example, does not possess a varsity women’s baseball team (although it should be said that softball is an important part of the athletics department). There isn’t a registered student organization, either. “A lot of them are regularly playing with boys’ teams,” Padove said of the players at the Girls ID Tour. “To get them all together is important.”

Parents attending the event knew the story as well. The same few fortunate phenomena usually had to fall into place for their daughters to even get the chance to try baseball: a son on a team; an unafraid, interested daughter; a kindly coach. “I’d signed up her brother to play T-ball,” Geovanna Silva said of her 13-year-old daughter Rosie Gonzalez. “When I took her, she didn’t get a cap, and she started tearing up. She was three years old. She wanted to know why she couldn’t play. We asked the athletic director. He asked her, ‘Do you want to play baseball?’ And she said yes, and he gave her a cap, and she’s been playing ever since.”

Rosie has baseball in her blood—her grandfather played professionally in Puerto Rico for years. She herself is currently plying her craft as a catcher for Top Tier Baseball in McCook, Illinois. She is usually the only girl on the team; Silva stated that Rosie has sometimes faced abuse from the bleachers while playing. Parents will shout to the umpires, asking them to check if she is allowed to play, for example. Playing alongside other girls obviously makes things a bit easier. “It feels more like a family to me,” Rosie told me. “They get me.” (She was quick to add, though, that co-ed “travel ball is also really fun.”) Rosie plans to try out for Riverside Brookfield High School’s baseball team when she graduates middle school. No girl has ever attempted to join the baseball team at Riverside Brookfield, much less succeed. Still, the catcher seems calm about the situation. “If I don’t make it, I’ll probably try out for the softball team,” she said.

Of the players I spoke to, it was rare to find one who didn’t have an end goal to their career in mind. Many wanted to become the first woman to play in the MLB. A few said that playing for the USA Baseball Women’s National Team was their dream, like 17-year-old Nicole Coletta, who has attended many events similar to the Girls ID Tour in the past. Lily Pascarelli, an 18-year-old Chicago native, also said that playing for the national team was her goal. Pascarelli started out as a softball player, but fell in love with baseball after being invited by a friend to play recreationally. She currently plays for the Schaumburg Flyers as a pitcher and first baseman. Like Rosie, she is the only girl on the team. She spoke of the bond that girls in baseball possess—of how they “share a similar passion as people who normally…stick out more.”

The Girls ID Tour looks to play a part in rectifying the wrongs that female ballplayers face. Coach Chaney waxed lyrical about the importance of the event for his players. “They can see how they stack up against other girls, how they stack up against other talent.…It’s [also] great for them to come out here and see all the other girls that are actually playing, and have a desire to play, so that they know they’re not alone.” He believes that if a professional women’s baseball league is founded in the future, similar to the WNBA, it will be because of the foundational steps that are currently being taken. “You may not see all of the benefits in your lifetime,” Chaney said. “But then, we’re enjoying benefits right now based off of things that people did before us.” Padove added that MLB GRIT events provide opportunities for girls to join the baseball pipeline in other ways than just as a player. General manager, head coach, and scout are all baseball jobs women are slowly beginning to occupy. Rosie told her mother at a young age that if she couldn’t make it as an MLB player, she’d want to be a scout. “I’ve always kind of dreamed of making my own team,” Rosie told me.

After some pitching and catching work, the Girls ID Tour concluded. Padove spoke to the parents by the bleachers as the other organizers and coaches led the players to the center of the turf for a farewell. Each of the girls received a Chicago Cubs T-shirt as they walked off the field. It had been a long event. Everyone—parents, photographers, coaches, players—looked tired. Still, there seemed to be a shared energy radiating in the air among the players as they left the turf. No surprise there. “I grew up playing with guys,” Coletta told The Maroon. “It’s an awesome bond to have, but when you come here and play with other girls, everyone knows exactly what you’ve been through.”