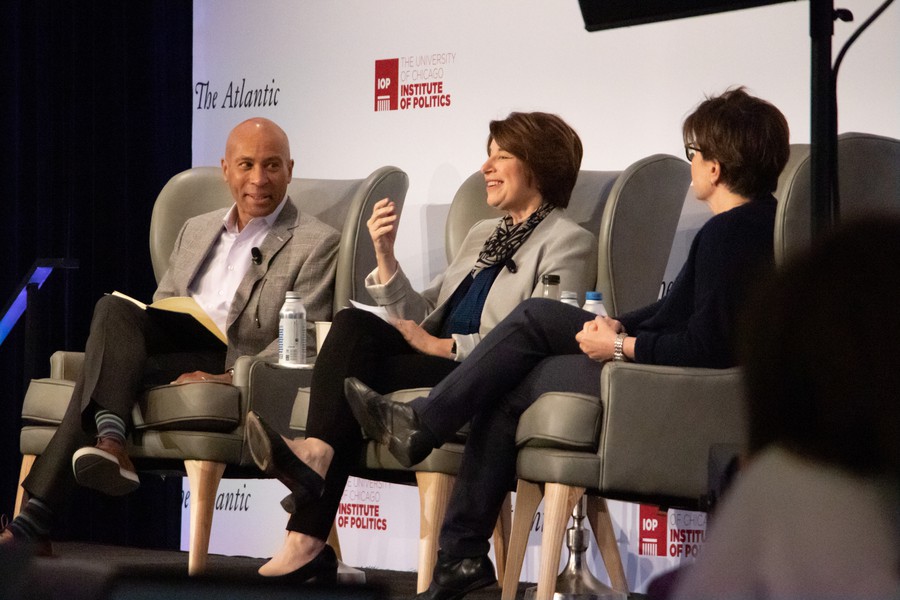 By Anu Vashist   and Noah Glasgow

After former president Barack Obama’s appearance on the evening of April 6, the Disinformation and the Erosion of Democracy conference, co-hosted at the Rubenstein Forum by UChicago’s Institute of Politics (IOP) and The Atlantic, continued on April 7 and 8. The conference, which featured politicians and media figures like Frances Haugen, Adam Kinzinger, and Brian Stelter, focused on the growing spread of disinformation, especially through social media, and on possible solutions to the problem.

Panel discussions began Thursday morning with a discussion on the extent of social media’s influence over contemporary politics, featuring media editors from across the political spectrum, including Jonah Goldberg of the conservative news site The Dispatch and Ben Smith, the former editor-in-chief of Buzzfeed News. Goldberg, stressing the role of disinformation, saw social media as enabling some of the worst tendencies in political discourse. “American culture has a problem with manipulating narratives rather than just recounting the facts,” he said. Smith called social media and the Internet “tools that are incredibly effective for waging war on the establishment” irrespective of the establishment’s political structure, whether democratic or authoritarian.

The conversation continued with a technical discussion on the role that deepfakes might come to play in the spread of political disinformation. Deepfakes are photos or videos that recreate the appearance of public figures using machine-learning algorithms that study thousands of images and videos of an individual’s face. Although the software has tremendous potential in the world of entertainment, its more nefarious uses, particularly in political discourse, led panelist Joan Donovan—a deepfake expert and the research director of Harvard University’s Shorenstein Center on Media, Politics and Public Policy—to deny the popular idea that the technology is “neutral” in some way. “You also have to look at the context in which [the technology is] being used,” Donovan said.

Computer scientists Camille François and Karrie Karahalios joined technology journalist Casey Newton to discuss the role of algorithms in the spread of disinformation. “Algorithms are absolutely essential, critical, and key to how disinformation propagates on social media,” François said. Both she and Karahalios stressed that Facebook and Instagram feeds are not the only ways in which people are targeted by algorithms. What advertisements we see and whether or not we are given a loan are, in some cases, decisions also relegated to algorithms.

Journalists Stephen Hayes, Brian Stelter, and Lauren Williams joined The New York Times’s Jim Rutenberg for a discussion on “How Media Platforms Shape Consumer Realities.” Hayes, co-founder of The Dispatch, and Williams, co-founder of Capital B—a news site centered on reporting for Black communities—both stressed that the mainstream media has isolated certain groups in American society whose interests are underrepresented. In a moment that went viral on social media, Stelter responded to a question from Chicago Thinker staff writer Christopher Phillips about left-leaning bias in the media. Stelter explained that news outlets and the government aren’t as cooperative as many seem to think: “The last time I spoke with a Biden aide, we yelled at each other,” he said. “[That’s the reality] that people don’t see. They imagine it’s a situation that it simply is not.”

Diane Benscoter, Jacquelyn Mason, and Abbie Richards talked with Ellen Cushing of The Atlantic about how people fall prey to conspiracy theories. Mason discussed why, given the continued history of medical violence in the United States, racial minorities might be subject to conspiracy theories, especially with regard to the COVID-19 vaccine. Benscoter discussed how conspiracy theories can psychologically manipulate their believers. According to Richards, among the most vulnerable to disinformation are young people, many of whom encounter falsehoods on TikTok. Possible solutions the panel considered included changing the way mainstream media represents and portrays people of color, educating people on how to discern truth from disinformation before encountering it, and conducting more research into its dissemination. “This is a public health issue, and we need a public health approach to this,” Benscoter concluded.

Following break-out discussions, Georgetown Law’s Mary McCord joined UChicago’s Geoffrey Stone, a principal architect of the Chicago principles, for a discussion on free speech jurisprudence in the age of the Internet. McCord, who has worked on legal cases against right-wing extremists, characterized the conspiracies promoted by disinformation campaigns as a “uniting force” for a diverse range of extremist groups that were not previously united. Although Stone acknowledged that attacking disinformation in the courts is tempting, he noted that certain laws would make the government responsible for such prosecution. “Do you trust the government to decide whom to prosecute? Imagine the Trump administration having the authority to decide what is false on social media,” he said. 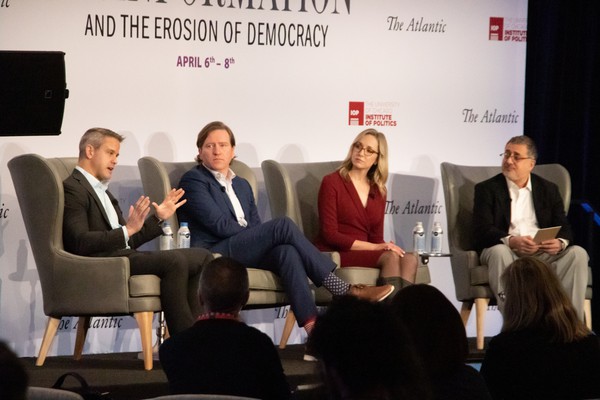 After a welcome speech from David Axelrod, the final day of the conference began with a conversation on how disinformation can spur political violence. Representative Adam Kinzinger (R-IL) recounted his experience of the January 6 insurrection. A member of the Select Committee to Investigate the January 6th Attack on the U.S. Capitol, Kinzinger noted the importance of the developing report, which he expects to be released over the summer: “Our real audience is history, because in five or 10 years, when my kid is in school and he’s learning about January 6, I want him to know the truth. I don’t want there to be any shred of doubt that…it was anything but what it was, which was a Trump-inspired insurrection.”

UChicago history professor Kathleen Belew, who specializes in the post-1970s white power movement, suggested that historians might view January 6 more as a problem of narrative and worldview construction than one of disinformation. Citing examples from white power leadership in the 1980s, Belew said, “The idea is that there is a cabal of elites that are in charge of a purposeful campaign to destroy the white race through a set of social issues.”

In any event, she sees teaching history as a solution for countering potential violence that results from disinformation. “This all goes back to the classroom because the other thing that we don’t teach anymore is civics,” she said. “If you have a whole bunch of people storming the Capitol to protest how they think the election was rigged, who don’t know how elections work…we have an education problem.”

Senator Amy Klobuchar (D-MN, J.D. ’85) and former Massachusetts governor Deval Patrick talked with journalist Kara Swisher about how governments can approach the threats of disinformation online. After discussing legislation she has introduced, like an exception to Section 230—a federal statute that prevents social media companies from being held liable for content on their platforms—in the case of illegitimate medical claims during health crises, Klobuchar emphasized the importance of small, local news organizations to American democracy. “A high school football game or a new development at a town library—these kinds of things need to be covered,” she said. “People need to have a shared understanding of what’s happening in their community to be able to be part of that community.”

Former U.S. representative Will Hurd and Representative Elissa Slotkin (D-MI), in conversation with Jeffrey Goldberg, used their backgrounds in national security to discuss the threat of foreign-funded propaganda to American citizens. In a discussion regarding RT, a Russian state-controlled news channel that was available on U.S. cable networks prior to the Russian invasion of Ukraine, Slotkin explained how foreign propaganda was able to be disseminated in the U.S. and how the private sector was quickly able to limit its spread. “We tried all kinds of exploration into this and on a bipartisan basis, and couldn't manage what the private cable companies in the United States did in one week after the invasion,” Slotkin said.

The conference concluded with a forward-looking dialogue on possible answers to the disinformation problem. Haugen joined journalists Cecilia Kang and Charlie Warzel, University of Massachusetts Amherst professor Ethan Zuckerman, and current IOP Pritzker fellow Erin Simpson (A.B. ’15) to discuss solutions to online disinformation. Proposed solutions included increased transparency, more diversity among leaders of tech companies, better education, antitrust legislation, and establishing a floor for minimal product safety. Haugen emphasized that disinformation on social media is not a new or unsolvable problem, citing initial problems of disinformation and propaganda with the printing press and newspapers, radio, and television. “It feels weird to us now because this is our crisis and…our burden to figure out what [to] do,” she said. “Well, we’ve done it before, over and over again. We will figure it out.” 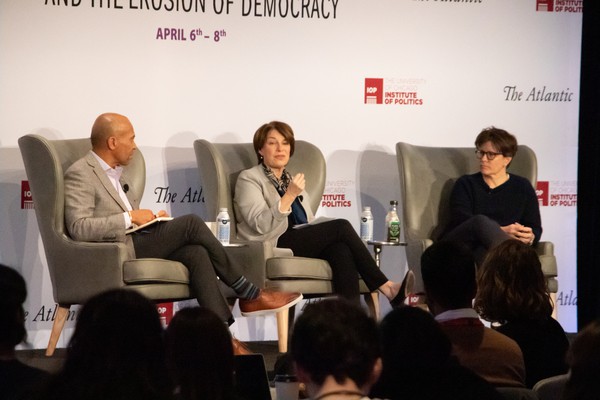 L–R: Deval Patrick, Amy Klobuchar, and Kara Swisher at the IOP's "Disinformation and the Erosion of Democracy" conference.