Samantha Rose Hill Talks with The Maroon About Her New Biography, Hannah Arendt 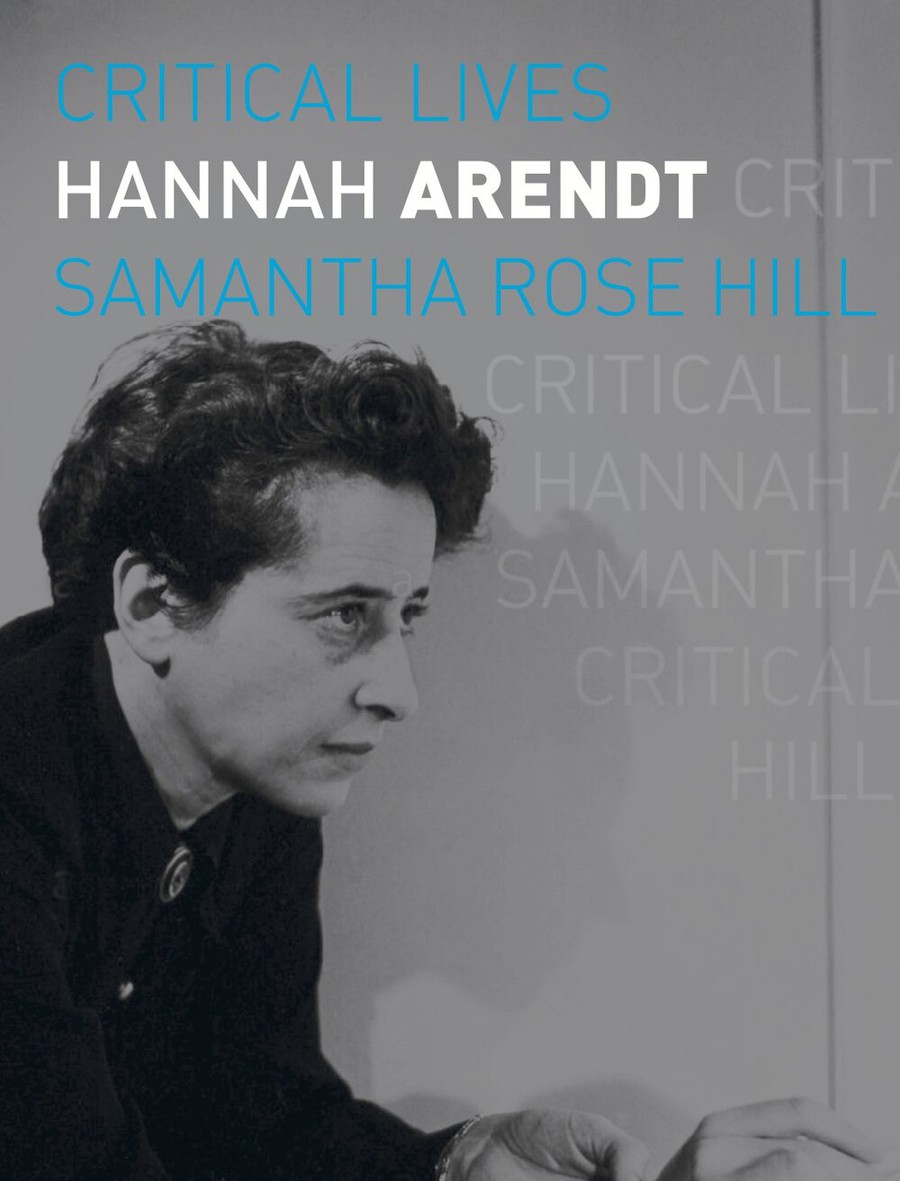 The cover of Samantha Rose Hill's new biography on philosopher and political theorist Hannah Arendt, which is titled "Hannah Arendt."

Samantha Rose Hill is an associate faculty member at the Brooklyn Institute for Social Research and the author of a recent biography of philosopher and political theorist Hannah Arendt. She recently sat down with The Chicago Maroon to discuss the biography, titled Hannah Arendt.

The Chicago Maroon (CM): How did you come to study Arendt and write this biography?

Samantha Rose Hill (SRH): I stumbled across Arendt’s work one afternoon my freshman year of college when I was wandering through the [book]stacks looking for a copy of Erich Fromm’s Marxist Concept of Man. I found [Arendt’s] The Human Condition, and I sat down on a leather sofa in a reading room and started reading Hannah Arendt’s beautiful poetic preface, which is a meditation on the launch of Sputnik. It was unlike any political philosophy that I had encountered, and I had been reading political philosophy for quite a while—I fell in love with Nietzsche when I was thirteen years old, and then Freud and Marx, as one does when they’re a teenager in the Midwest. Arendt was doing something radically different, and I was keenly aware of the fact that I didn’t understand anything she was talking about. But I really wanted to understand, so I took nine [courses] in college to study Hannah Arendt and her antecedents—Plato, Aristotle, Hegel. When I got to graduate school, I wrote my dissertation on Walter Benjamin, Hannah Arendt, and Theodor Adorno. At this point, I’ve been working on Arendt for the last 20 years.

CM: What is your biography doing differently than your political theory/philosophical investigation of Arendt? How does biography enlighten philosophy, and how is it different?

SRH: I wrote an introductory biography to Hannah Arendt’s life and work. I hope it will invite newcomers to Arendt’s work, to The Origins of Totalitarianism, The Human Condition, Eichmann in Jerusalem and some of her wonderful essays. For people who know Arendt and already have a familiarity with her work, I’ve tried to do a couple of things in the book. I went to the archives where Arendt’s papers are—the German literature archive in Marbach, the Library of Congress in Washington, D.C., the New York Public Library in New York City—and I was able to incorporate some letters, material details, facts about her life that had not been included in previous biographies, simply because the archives weren’t open or those papers weren’t available, or because of the decisions we make as authors—which are always difficult. I was also able to piece together an account of her time in exile and her internment in Gurs and her escape. That’s the first time that’s been done in a biography of Arendt. I wanted to give readers a sense of what she went through before she arrived in the United States on May 22, 1941.

CM: There’s a phrase you use throughout the book to describe one of Arendt’s conceptual categories as “lived experience.” I hear this phrase a lot today, and I wanted to ask if this is a phrase she uses, or if this is language you’re using to draw the connection between our contemporary concept of lived experience and her German terminology?

SRH: This is a phrase that’s taken on a new meaning in our contemporary era—it’s a very weighty political phrase associated with woke politics. But in German, etymologically, there are two different terms for experience that are used: There’s erfahrung and erlebnis, and erleben is an experience in relation to something, whereas erfahrungen is inner experience. When Arendt talks about experience, she’s talking about experience in relation to the world of things. This is “lived experience” in the sense that we experience the world around us, the actual materiality of people and things. It’s not the inner experience in the mind that doesn’t appear in the world. “Lived experience” relates to the realm of human appearances. The “ex” in experience literally means to stand out, so if you look at the beginning of Kant’s Critique of Judgment, for example, he talks about this in terms of taking up space. We actually exist in the world, and so we can see each other, and there’s a ground of recognition there.

CM: You mention in the book how there’s a strain of scholarship that looks at Arendt and race. Perhaps it’s impossible to answer this question, but what might she think about [this response to her work]?

SRH: I cannot speak for Arendt—sometimes when I teach, I joke about shaking my magic Arendt eight ball. But Arendt talks about race in a couple of different places in her work, most notably in The Origins of Totalitarianism, where she talks about a fundamental shift between race-thinking and racism, where racism becomes an ideology, inseparable from the rise of imperialism and colonialism. She argues that racism, along with classism, is one of the most defining diseases of our world—she argues it might cause the collapse of Western civilization. In Origins she argues that racism becomes so pervasive that people aren’t consciously aware of the extent to which they are racist. She’s not hopeful that this is something that can be fixed or repaired. In Reflections on Little Rock which remains her most contentious essay, she argues against the Brown v. Board decision which overturned Plessy v. Ferguson and the statute of “separate but equal.” She argues against it on two grounds: She’s worried about the expansionism of the federal government—she puts a lot of emphasis on states’ rights throughout her writing on politics—and she argues that schoolchildren should not be mobilized by adults to fight political battles. There’s been a lot of wonderful scholarship done on Arendt’s writing on race—on judgment, on thinking, on imagination—and I include some of those critiques in the biography. So if you want to read further, I’d look at Fred Moten’s recent work on Black and Blur, and Kathryn Sophia Belle’s work. Also, I just did an eight-episode podcast on Hannah Arendt’s work launching next month, including an episode with philosophy professor Anita L. Allen, who talks about the public/private distinction and race in Hannah Arendt’s work. Arendt isn’t somebody to think through—she’s not giving us a framework for things, she’s not telling us what to think—she’s somebody to think with and against, to kind of rub up against her work in your thinking, and it can be thought-provoking. I certainly don’t always find myself in agreement with everything Arendt writes.

CM: It seems that Arendt’s thinking on race, or in general, could be useful to current political movements, and in other ways could be in a lot of tension with them. Are there any ways you see her being appropriated for or against by contemporary thinkers or political movements?

SRH: I think people are always trying to put Arendt in a political box. They want to say she is a conservative or a liberal or a great defender of free speech or this or that—and the hardest thing to understand about Arendt’s work, which I emphasize in the biography, is that she was a profoundly anti-ideological thinker. So you can’t really put her into any of these boxes. I’m very interested in the way poet and philosopher Fred Moten thinks with Hannah Arendt. He’s critiquing her work, including her work on race, in a very powerful way, thinking about Kantian imagination, the ways in which we judge, the expansion of the imagination. But it’s not just against, it’s thinking with her in a way that’s expansive to the ways in which we think about these things today.

CM: In your book, you write, “Our century is not Arendt’s, and this is part of her challenge to us.” You also describe her as not minding disagreement but hating bad faith.

SRH: We see that in her own biography, most clearly around the publication of Eichmann in Jerusalem: A Report on the Banality of Evil. And she wrote her essay Truth and Politics as a response to the response she received to publishing those [Eichmann] essays in The New Yorker. She argues that people had not actually even read her book, but that they were responding to critiques of the book. They weren’t engaging her in good faith…so she wanted to understand that phenomenon: What happens to political conversation in the public realm when we don’t have good-faith engagement with ideas. When she published Eichmann in Jerusalem, she was essentially canceled by all of New York literary society. Lionel Abel and Irving Trilling gathered a hundred people at the Hotel Diplomat in Manhattan, and one person after the other got up on stage and disavowed Hannah Arendt and the book—I recount this in the biography. In that sense, she is certainly someone we can think with today about the integrity of public discourse, digital technology and social media having reshaped the ways in which we engage with one another. She did not predict the extent to which that would happen, but she talks about the rise of the social and the specter of technology in the human condition. And you can think with her, but we have to go beyond her.