Members of EJTF, Phoenix Sustainability Initiative, UChicago Students for Justice in Palestine, and #CareNotCops gave speeches in front of Levi Hall before leading students in a march around the main quadrangle. 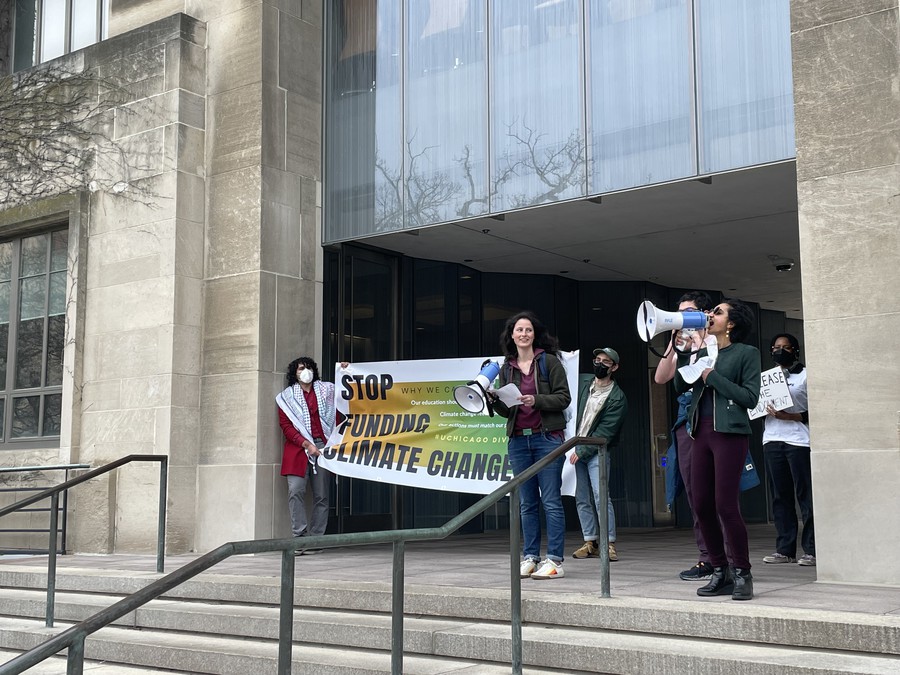 Environmental Justice Task Force (EJTF), a subset of UChicago Student Action (UCSA), held a rally on April 29 to demand that the University divest its endowment from fossil fuels. Members of EJTF, Phoenix Sustainability Initiative (PSI), UChicago Students for Justice in Palestine (SJP), and #CareNotCops (CNC) gave speeches in front of Levi Hall before leading students in a march around the main quadrangle.

“I thought I would come out to support [the divestment from fossil fuels] because the University should join the other 10 out of the…20 universities with the biggest endowments and divest from fossil fuels,” second-year Priya Rawal told *The Maroon*. “We should not be in the bad half.”

After the initial date of April 22 was rained out, the rally was rescheduled to April 29. About 30 people attended the event. According to EJTF co-coordinator Ana Silberg, the campaign also advocates increased community input and transparency regarding the University’s $11 billion endowment.

“I think people kind of have the wrong idea about divestment,” Silberg told *The Maroon*. “It’s not just about saving the beautiful Earth.… There’s a lot of erasure in environmental justice. But the big picture for us is that we want community input and student input in the endowment as well. This University needs to put its money where its mouth is.”

Despite the school’s commitment to a 50 percent reduction in greenhouse gas emissions by 2030, the University’s Office of Investment and Board of Trustees have yet to address divesting from the fossil fuel industry. In response, UCSA launched a “Fossil-Free Endowment” campaign in fall 2021. Previous divestment-focused action hosted by EJTF predecessor University Climate Action Network included an occupation of Levi Hall that took place in 2016.

“​​We wanted to—after two years of COVID, pretty much—really turn our attention back towards campus,” said EJTF co-coordinator Eu Craciunescu, a fourth-year. “We traditionally have worked a lot on citywide or statewide campaigns dealing with environmental justice, but we just wanted to bring it back to campus and reconnect with the campus a little bit after such a long time.”

Craciunescu also said that he was more hopeful for the campaign’s success after Paul Alivisatos took over the University presidency from Robert Zimmer on September 1, 2021.

“The new president [Alivisatos] was at a school that had already committed to divestment, at [the University of California,] Berkeley, so we figured a change in administration would make the University maybe a little more amenable to divestment,” Craciunescu said.

With the help of Undergraduate Student Government (USG), EJTF is preparing for an upcoming meeting with the Investment Office, co-coordinator Kate Ferrera said. The meeting, originally planned for fall 2021, was repeatedly postponed because of scheduling conflicts.

According to a petition by EJTF, students are calling upon the University to join colleges and universities around the country—including Harvard University, Yale University, and Columbia University—in mitigating climate change through divestment. 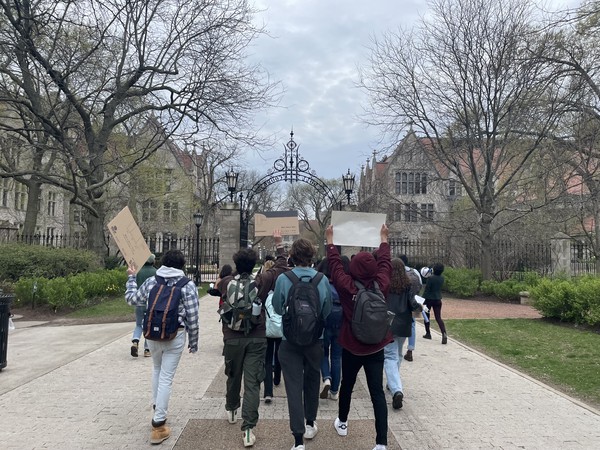 Students held up posters as they marched through Hull Gate at an Environmental Justice Task Force rally on April 29.