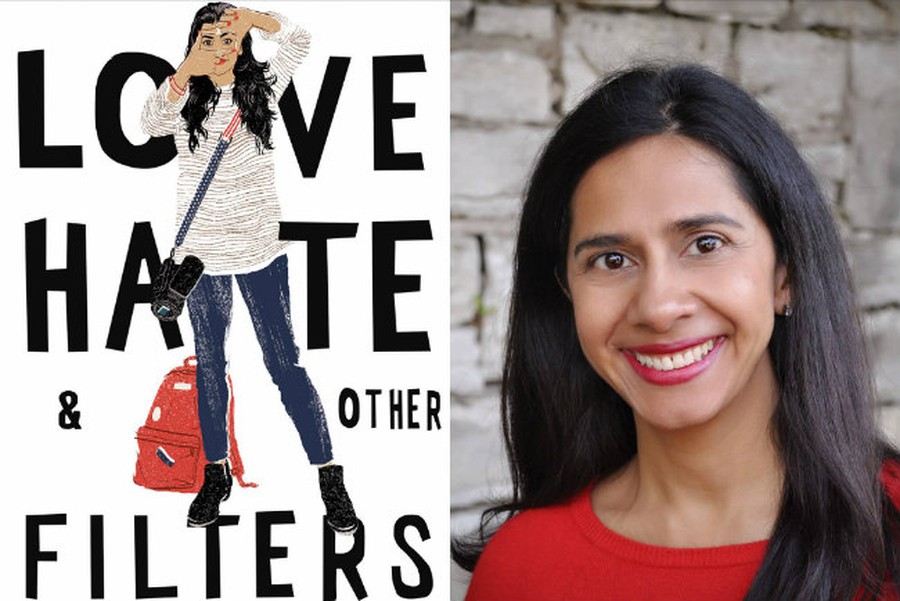 Known for her novels Love, Hate & Other Filters and Internment, New York Times bestselling author Samira Ahmed will give the Class Day speech.

Samira Ahmed did not originally plan to go into writing, but her undergraduate years at UChicago piqued her interest in literature. Ahmed graduated with a bachelor’s degree in English and a joint Master of Arts in teaching.

At UChicago, Ahmed was very involved on campus. From serving as a founding member of the Muslim Students Association to writing for an Asian American creative journal called *Rice and Beans*, she enjoyed her time at the College in terms of both extracurriculars and academics. One of her favorite memories is camping on Harper quad when students were assigned a number in line to sign up for the next quarter’s classes. Missing your turn meant losing your spot in line; to avoid this, many students set up tents.

As a high school English teacher, Ahmed recognized the value of young adult literature, which inspired her to become an author. “It is this amazing interstitial space when you write for young adults, because a lot of times people refer to college as not the real world, the real world is after college. But I think that college is the real world,” Ahmed said. “It’s one that’s full of complexity and tough decision making and a lot of interesting questions. It’s sort of the ultimate growth mindset space, and I just am fascinated by that and love writing to that.”

When Ahmed received the email from Dean of the College John Boyer asking her to be the Class Day speaker, she originally thought it was for a different purpose. “I actually initially saw the email from Dean Boyer and thought it was a fundraising email. But I read it and then reread it. I was a little bit gobsmacked,” Ahmed recounted. “I was surprised and also deeply honored by it. It’s a privilege to be able to speak at my alma mater, but also what a privilege it is to speak to young people who are graduating.”

Throughout her career, Ahmed never forgot the lessons she learned at the College, lessons she hopes to share with the graduates in her Class Day speech. “I want graduates to understand how important some of those ‘habits of mind’ that are created in the College and through the Common Core are for the world, beyond the walls of the University of Chicago,” she said. “I hope that they will use those tools and use what they’ve learned to change the world around them for the better.”

At Convocation, UChicago astrophysics professor Wendy Freedman will talk to graduates about the growth of ideas. But in her day job, she studies the growth of something far larger: the universe.

At the University of Toronto, Freedman originally planned to focus on biophysics. However, in college, she gravitated more towards astronomy than biology. “When I learned about finite travel time, that what we’re seeing when we look at distant stars or distant galaxies is those objects as they were when the light left them, I became aware of the vastness of astronomical distance,” she said. “I switched majors and haven’t looked back.”

After graduating, Freedman researched at the Carnegie Observatories in Pasadena, California with a focus on the expansion of the universe. She studies this by calculating how far away galaxies are from Earth, a measurement she has spent most of her career trying to refine. In 2001, she led a team that settled the debate of the expansion rate, or age of, the universe. Her team narrowed the universe’s age from a range of 10 to 20 billion years old to a more precise estimate of 13.8 billion years old.

Freedman later became the director at the Observatories for 10 years, during which she led an international project to build the 25-meter Giant Magellan Telescope, one of the world’s largest optical telescopes. It is currently under construction in Chile.

A decade into the role, Freedman received an offer to teach at UChicago, a position that would allow her more time to focus on her research and connect with a new generation of scientists. In her research, Freedman has continued to focus on measurements within cosmology. Her research group has been awarded time on the recently-launched James Webb Space Telescope in NASA to collect distance data.

However, the switch to academia has introduced her to a whole new world. “The focus in an academic department is very much geared to teaching and the students. And that’s very new for me,” she said. “For me, it’s a whole new challenge, and it’s an exciting one. I really like this part of it.”

At Convocation, Freedman hopes to provide perspective. “It’s been an unusual time that we’ve been through,” she said. “There’s a sense in which it’s a difficult time, but it’s also a time of real opportunity, collaboration, and cooperation. I’m trying to weave together these different concepts [...] and it did involve examining our assumptions and realizing that there were data and ideas that weren’t very good. That willingness to have to remain open to new ideas is what I’m heading toward.”