By Michael McClure    and Olivia Chilkoti 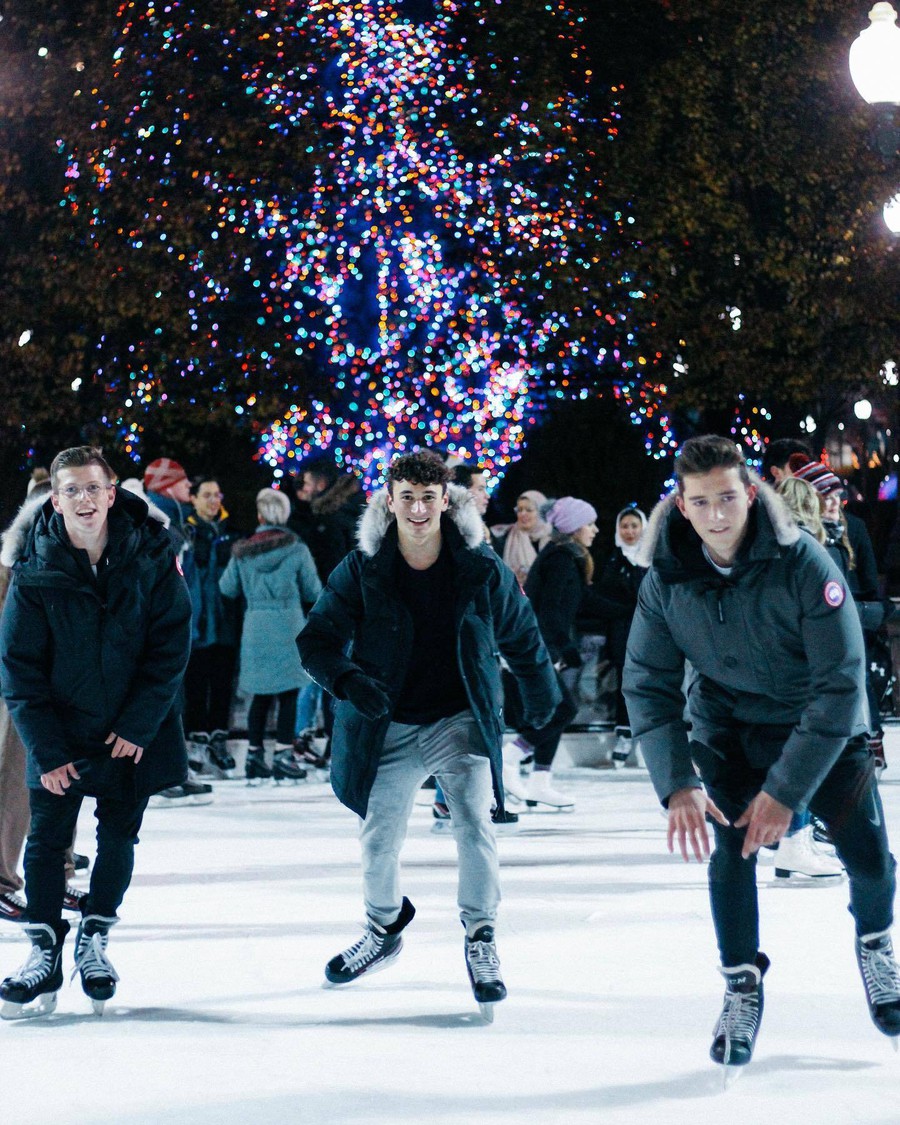 Naibryf skating in Millennium Park in December 2018, during his first quarter at UChicago.

Editor’s note: The interviews for this story were conducted in the summer of 2021 but were regrettably not published at the time. On the eve of what would have been his graduation, The Maroon hopes to commemorate Naibryf.

Class of 2022 student Ilan Naibryf was set to graduate from the University of Chicago this year. He died at age 21 in the collapse of the Champlain Towers South condominium in Surfside, Florida, on June 24, 2021.

Naibryf was pursuing a major in physics and a minor in molecular engineering at the time of his death. On campus, he was active in the Rohr Chabad Jewish Center, serving as the president of its student board during the 2020–21 school year. He also cofounded financial technology startup STIX Financials, which finished fourth in the finals of the 2021 College New Venture Challenge.

In conversations with The Maroon, several of his classmates at UChicago spoke to Naibryf’s care and consideration for his family and friends. Naibryf is survived by his parents, Carlos and Ronit, and his sisters, Micaela and Tali. His girlfriend of two years, Deborah Berezdivin, also perished in the condo collapse. She and Naibryf were staying at Champlain Tower to attend the funeral of a family friend.

Often seen skateboarding around campus, Naibryf gained a reputation for his many inventions. Speaking to The Maroon, fourth-year Austen Dellinger fondly recalled Naibryf’s attempt to create his own virtual assistant in the vein of Amazon’s Alexa product.

“During sophomore year, he was really set on building his own Alexa,” Dellinger said. “One night he’d finally finished it and he kept FaceTiming me every 30 minutes to have me ask Alexa questions.”

During the video calls, Dellinger teased Naibryf by testing the limits of the virtual assistant using her Self, Culture, and Society course readings.

“I was reading Marx and Hegel, so I kept being annoying and asking Alexa questions about Marx. And Ilan was getting so annoyed because Alexa didn't know [the answers]. He kept trying to rephrase my question so that his Alexa could possibly answer them. I was messing with him, but it’s really amazing because he did create a basically functioning Alexa,” she said.

Born in Argentina but raised in South Florida, Naibryf attended high school as a boarding student at the Hawai‘i Preparatory Academy, graduating in 2018. While in high school, he also played on the youth men’s soccer team of Maccabi U.S.A., a national sports organization for Jewish athletes, traveling to Israel to participate in the 20th Maccabiah Games in July 2017.

At UChicago, Naibryf continued his soccer career by playing on and captaining the men’s club soccer team. He was also a middle-distance runner on the men’s cross-country team as a first-year. He worked as a tutor for the Computer Science Instructional Laboratory and at Regenstein Library’s IT Services TechBar. Naibryf’s other hobbies included photography, playing the guitar and ukulele, and traveling.

In addition to a virtual assistant and a mini three-dimensional printer, Naibryf also built robotic prosthetic devices used by UChicago Medicine in its research. During their second year, Naibryf and classmate Juven Maeztu traveled to Boston and New York to present their work on a grant from the National Science Foundation, arranged through the Polsky Center. Naibryf entered the prosthetic device in the College New Venture Challenge in 2020, but he didn’t make it to the final round.

The next year, he reentered the contest with STIX, which he cofounded with Maeztu and fourth-year Ananiya Neeck. STIX was designed to allow its users to make payments using a debit card linked to their stock portfolios.

Maeztu, who later became Naibryf’s roommate, remembers his exceptional drive as a budding entrepreneur and innovator.

“He was driven not just to work hard and get good grades, like you typically see at UChicago, but to create something new. That’s why we created medical devices when neither of us had any medical experience, or why he created a revolutionary fintech company when neither of us had any experience in finance. He wasn’t scared or intimidated. He was always driven to push boundaries because that’s what excited him about life,” Maeztu said.

“He really enjoyed life, not just in a carefree way but in trying to really get the most out of life as much as he could. And whether that was his relationships or family or his work, he was always [living life to] the fullest.”

As a first-year, Naibryf became involved in Chabad, eventually rising to become president of its student board. Brackman said that Naibryf contributed greatly to Chabad, from welcoming new students to the Chabad community to stopping by on his skateboard to pick up dinner leftovers.

“At Chabad, we try to create a very familial, home-like atmosphere, and he really gravitated to that,” Brackman said. “He was always positive. Sometimes if there was a new student, I would tell Ilan, ‘Please go welcome that student.’ He was one of the go-to people that I knew would sit down and make them comfortable.”

Dellinger saw the same characteristic in Naibryf—a keen interest in getting to know people everywhere he went.

“He had such a rare ability to connect with people, not only effortlessly, but to really mean it. There were no small actors in his life. Even if it was someone that he would see on occasion, every moment he had with people was meaningful,” she said. “I will always feel really honored to be privy to his mind and accomplishments, but that’s not what I feel [is] what he left [behind]. It was who he was as a friend and as a person.”

Naibryf’s ability to connect with others also helped his roommate Conor Ching, a fourth-year, acclimate to UChicago after transferring to the school from the University of Southern California in 2020. Ching and Naibryf spent their COVID-affected third year bonding over cooking, a shared love for skateboarding, and everyday moments like throwing a football around their living room and talking about their future plans.

“He would make sure to invite me or introduce me to different people, and that’s sort of how I got close to him. One of the greatest traditions that we had that really let me get close to him is he would always ask when I would want to eat lunch or dinner, and we would try to [synchronize] our dinner and lunch times every day in the spring quarter. So we probably had dinner together five out of seven nights in the week,” Ching said. “We'd either watch TV together or we would discuss whatever was happening in the world or just have random fun debates.”

But Ching, who called Naibryf “the best cook in the apartment,” also said Naibryf went above and beyond to help his friends. Ching told The Maroon about how Naibryf invited him to stay in the Chabad meeting room during finals week of spring quarter after their apartment, which lacked air conditioning, became uncomfortably hot. The next week, Naibryf cooked meals for Ching before moving out at the end of the academic year.

“I was helping him move out, and he had a bunch of food left over, and he was leaving a couple days earlier than I was. And he decided to…cook it all up and just leave it for me, which was crazy,” Ching said. “I’d known him for less than a year, but…he didn’t have to do all of this stuff [for me].”

“It was a super simple night.… We’re ice skating, just having such a great time just being out,” Ruark said. “[Naibryf was] skating around with this new camera and taking pictures of everyone. There’s got to be a Google Drive folder somewhere of all the pictures that he took. It was just so much fun.”

Ruark, a molecular engineering major, took several courses with Naibryf, and both played on the same club soccer team at UChicago. Those shared experiences allowed Ruark to see Naibryf as someone who brought enthusiasm and positivity to all that he did.

“It really put a lot of things into perspective. That passion and that positive outlook on every aspect of life is something that I am hoping to take from Ilan and embody and put into everything that I do from now on because [he] was just such an inspiring personality, an amazing personality to be around,” Ruark said. “It's hard to put into words how much that affects you and how special that is. But he was just the kid that you knew was so special.”