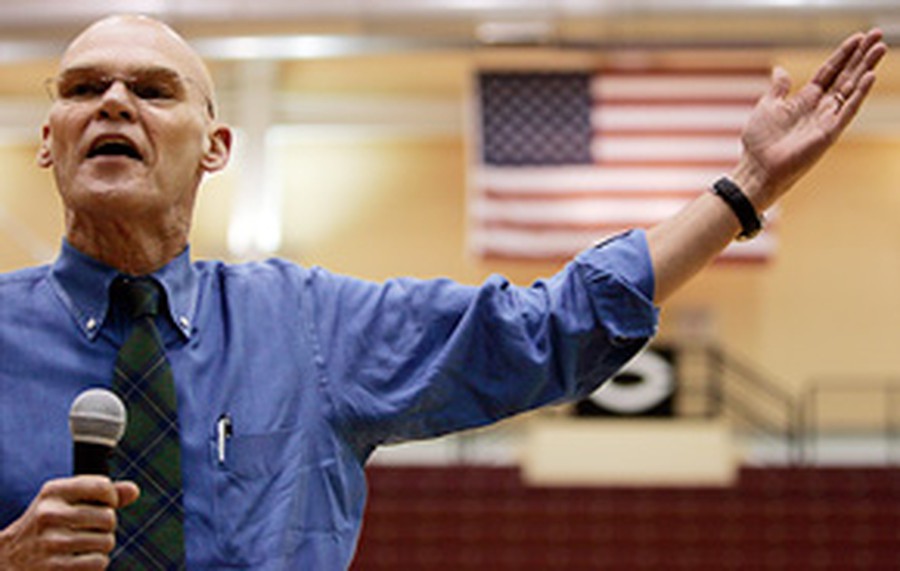 In an address to a mostly student audience Saturday, well known political consultant, author, and lead strategist of Bill Clinton’s 1992 presidential campaign James Carville lambasted the University of Chicago for what he said was “the havoc it has wreaked on the nation.”

As the featured speaker of the second annual Progressive Gala, held at Ratner Athletics Center and the Smart Museum, Carville said that academics, particularly the U of C’s economics department, have damaged the country by bringing theoretical ideas to Washington, D.C. He also called for the University of Chicago Board of Trustees to apologize for the actions of alumnus and former Deputy Secretary of Defense Paul Wolfowitz.

“In January 2001, it was reported, and probably true, that the United States was the greatest cultural, military, and economic power that the world has known since ancient Rome, and then they started listening to people at the University of Chicago,” he said.

“The economics department over here would say that the governing philosophy should be every man for himself. That’s the command of a failed captain. That’s what is said when the ship is sinking,” he said. “We have tried every man for himself. It has brought us in six years from being the most powerful country since ancient Rome to being where we are today. That policy needs to stop.”

Multiple times, Carville apologized to the audience for the current administration, saying that today’s youth will have to pay for the Bush administration’s mistakes.

“I look back and wonder if there was something I could have done to stop this lunacy we are seeing today,” he said. “The truth of the matter is that you are inheriting all of these mistakes.”

According to Carville, the fate of the nation and the world lie in the outcome of the 2008 presidential election, which he said represents the country’s chance to rejoin the global community. The lineup running in the Democratic presidential primary race is an incredible field of candidates, he said, adding that all of the Republican candidates want to stick with the status quo.

Carville also criticized Democratic National Committee chairman Howard Dean, saying that Dean did not help Democratic candidates enough during the 2006 congressional races. According to Carville, on election day, the DNC had $6 million left in unused credit and $4 million left in the bank. He said all of that money should have been spent on campaigns.

After Carville’s address, the Gala moved to the Smart Museum for a reception, music, and more events. The Chicago Debate Society argued issues, and the Roosevelt Institution held a panel discussion on progressive policy. The event also featured speakers from the U of C Law School.

Despite technology and venue snags, the Gala’s assistant chair and founder Hollie Russon Gilman, a third-year, considered the event a success.

“While many people, including myself, have qualms with paying a speaker an excessive amount of money, Carville gave a riveting speech that was uniquely geared toward [the] U of C,” she said. “I am most proud of the various speakers and performances ranging from Darfur activists [to] a thoroughly engaging debate [and] a truly inspirational spoken-word artist, Harlym 125.”

Gala staff member and second-year Evan Cudworth was pleased that the Gala attracted a big-name speaker despite the controversial nature of Carville’s speech.

“It’s always good to get people talking, even if they are disagreeing. That’s what separates the Gala from other closed, smaller RSO events on campus,” he said.

According to Gilman, organizers have already started thinking about future Galas. Next year, they would like to have an action-oriented Gala that would involve more community members. Organizers are also discussing “Women in Washington” as a possible future theme.

“One night is by no means a panacea and we are realistic that ‘true progress’ comes around slowly,” Gliman said. “But we believe when different RSOs come together to create something new and innovative the results will help move the dialogue forward.”