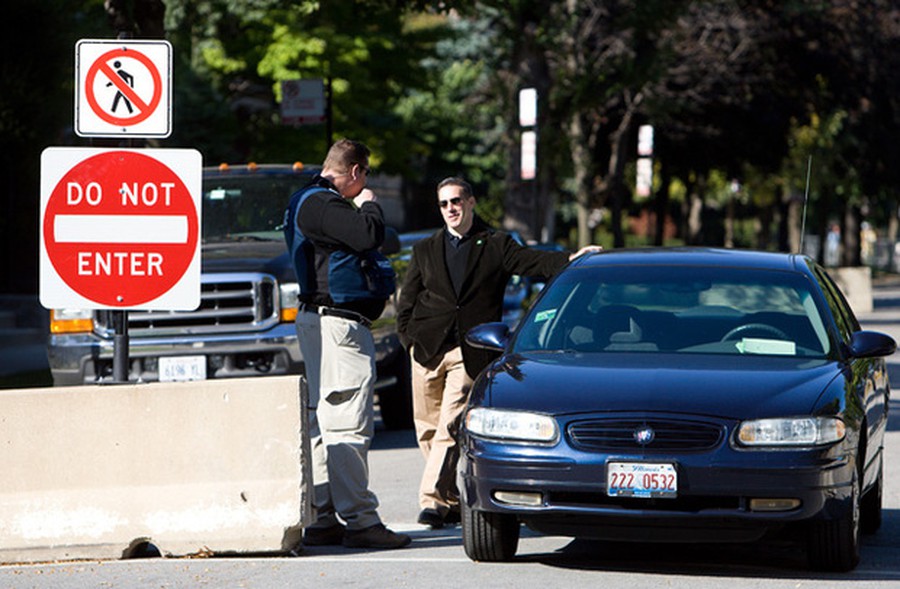 As Election Day draws closer, security has stepped up around Democratic presidential nominee Barack Obama’s home near South Hyde Park Boulevard, where there are as many as six or seven Secret Service cars visible from the intersection at any given moment. Concrete barriers and fences have been erected along both sides of the street, just north of the Hyde Park–Kenwood border, to control traffic through the area.

Though South Hyde Park Boulevard—which becomes East 51st Street west of South Drexel Avenue—is further north from the epicenter of campus than most students care to venture, the size and scope of the security presence have made interactions between students and the Secret Service largely unavoidable.

For most students living in the area, “inconvenience” is the word most frequently used when discussing the security presence.

Jarrod Wolf, a third-year in the College, cited parking as the primary source of his irritation.

“Since the Democratic Convention, I have been unable to park my car, or even stop it near my apartment,” he said in an e-mail interview. “If I want to unload anything I must park my car a block away…. I do recognize that he is a presidential contender and that he needs protection. It is just a bit inconvenient.”

But parking has not been the only casualty to the traffic control along South Hyde Park Boulevard. Foot traffic along the north side of the street has been redirected to the south side, and travel along the street where Obama lives has been restricted to residents and registered guests. Though Obama was reportedly placed under the protection of the Secret Service as early as May 3, the greatest security hikes came directly on the heels of the Democratic National Convention.

The Secret Service is authorized to protect presidential candidates 120 days before the election, though protection may be granted to candidates by executive order at any time, according to Secret Service media representatives.

Joe King, a bus driver for the north route, has had ample opportunity to observe changes surrounding Obama’s house. King said he experienced firsthand the heightened level of security during a brief entanglement with the Secret Service. In late September, King’s bus was pulled over after he dropped off a rider across the street from Obama’s house. He was instructed that vehicles were no longer allowed to pick up or drop off within the security zone.

“What’s so funny about them pulling me over is I dropped the person off, and they pulled me over like a criminal,” King said. “They cut me off and everything.”

King, an ardent Obama supporter, added that safety was his only concern with the new traffic regulations. Though the security presence on South Hyde Park Boulevard is highly visible, King questioned their responsiveness to crime outside of the immediate security zone, citing a recent sexual assault and armed robbery occurring several blocks to the east of the Obamas’ house.

“I don’t really like police,” she said. “But at two in the morning, it’s nice to see the security standing on the corner outside of their cars.”

Pillsbury’s roommate, Ali Harris, also relates the security to safety in the area.

“In terms of security, it’s actually made me feel much better,” she said. “Before we moved in our apartment was broken into, but nothing like that has really happened since.”

The Secret Service was cryptic when describing its role in preventing neighborhood crime.

“Secret Service agents are first and foremost federal agents. However, we are concerned not only with our protectee’s safety but also the public at large,” Edwin Donovan, spokesman for the Secret Service, said in an e-mail interview.

Though the heightened security measures have had an impact on daily routines for some of Obama’s neighbors, many students in the area have been largely unaffected.

“The only real effect it’s had on my life is that the north route doesn’t stop at my corner anymore,” Harris said.

Sean Redmond, a fourth-year in the College who lives a block away from Obama, doesn’t mind the security.

“I don’t live my life any differently, and since I never have any reason to go up to 51st Street, it’s pretty much a nonentity in my life, except when I look down the alley and see police cars,” he said.

Directly across the street from the Obama residence, the congregation of KAM Isaiah Israel synagogue has been living in peace with the security for several months. To enter the security zone, congregation members’ names must appear on a registry so their IDs can be checked upon entrance. Guests to the synagogue are instructed to call 24 hours in advance of their visit.

But according to Linda Ross, executive director of the synagogue, the new rules have caused very little frustration.

A notice on the congregation’s website alerted visitors to the new regulations: “Now that our famous neighbor has become the presidential nominee for the Democratic party, the Secret Service has instituted security measures to keep him, his family, and all of us safe.”

In an open letter to the congregation, KAM president Lawrence Bloom further outlined the procedures surrounding the security zone and expressed his expectation that the security operations would continue to run smoothly.

“This could be the most unusual challenge that our congregation has faced in its long history, but it is clearly not insurmountable,” he said in the letter.

Pillsbury said the children especially seem to have developed a positive rapport with the security outside of the synagogue.

“They’re really nice,” she said of the Secret Service. “We actually made a hopscotch for them at one point.”