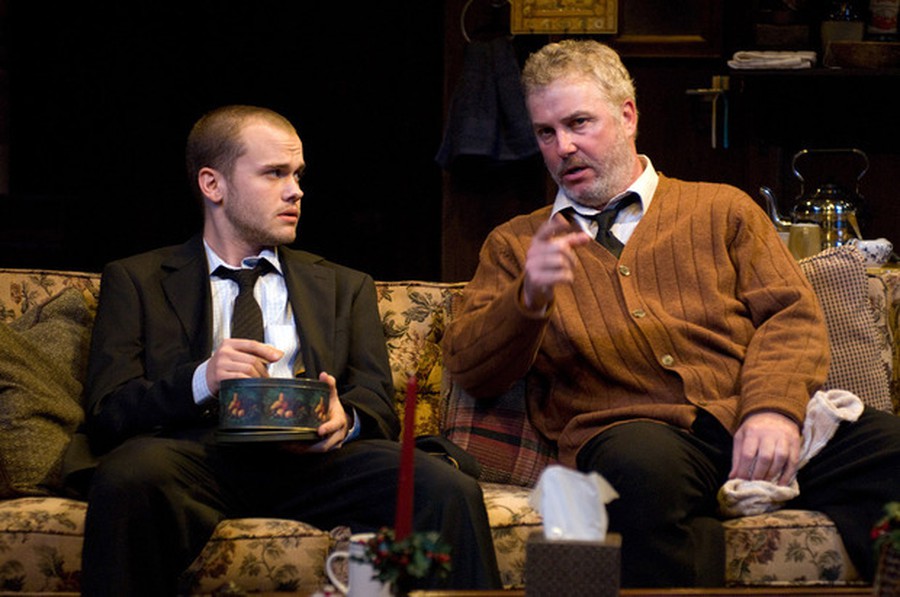 There is something about the holidays that has the potential to bring out the worst in everyone. Perhaps it’s the cheery glow of Christmas lights or the scent of gingerbread that has the uncanny ability to unearth regrets, vices, and disappointments from wherever we have buried them. And as in so many others, liquor is the obliging guide on these holiday tours of the soul’s darkness. Dublin Carol, Steppenwolf Theatre’s new one-act production by Conor McPherson, is a play for this kind of Christmas.

It begins with a world-weary man named John (William Peterson) who works in an undertaker’s office. He and his assistant, Mark (Stephen Louis), have just finished a funeral on Christmas Eve and are now winding down with a few drinks and a friendly conversation about their families. A sense of isolation pervades the sparsely decorated undertaker’s office as these men talk about people who are far away from this quiet place. But the stillness is shattered when John’s daughter, Mary (Nicole Wiesner), arrives for a surprise visit, bringing with her the painful memories of John’s past that have tormented him for many years.

The beauty of this play is that so much is done with so little. Both the script and the actors provide exactly the kind of precision that a one-act demands. The smallest gestures and the most casual remarks are each poignant in their own way. After John poured more than a few drinks, I felt myself wincing every time the liquor flowed again. The structure of the play is particularly effective, as the story of John’s life is related to the audience in bits and pieces. A sense of tragedy slowly accumulates around this man, and this feeling pervades the play.

William Peterson is absolutely touching in his portrayal of an agonized old man looking back on his life with many regrets. Peterson also plays the scientific and amiable Gil Grissom on CSI: Crime Scene Investigation. But John in Dublin Carol is a different beast. Peterson can be pathetic and pitiable one minute, cruel and despicable the next. He makes John a dynamic character whose emotions, flaws, and virtues are sincere.

Much of the credit here goes to Conor McPherson’s script, which provides two very powerful foils for the central character of John. Mark brings the perspective of a much younger generation to the events of John’s life. While he’s not very similar to the older man, it’s impossible not to compare the two and feel that they both share some essential characteristics. Mary, on the other hand, brings the perspective of the past. For John, she embodies all the mistakes that he would rather forget. Even though the play focuses on John’s life, both Mark and Mary are presented as distinct characters with their own flaws and prejudices.

That being said, Wiesner and Louis are certainly overshadowed by Peterson at times. These moments usually follow some of John’s longer speeches. But, then again, this might be acceptable in a one-act play anchored so strongly in the life of one character. It certainly does not detract significantly from the overall experience, but it does have the potential to draw your attention away.

I left the theater most impressed with the man behind the curtain, Conor McPherson. The plot moves along at the perfect speed to capture your attention, which is very impressive when no more than two characters are on the stage at a time, and the ending of the play culminates the experience perfectly. Even through all the disappointment and sadness, John is never completely demonized. But he is never redeemed, either, and despite his hidden flaws, a hope for change stubbornly remains.