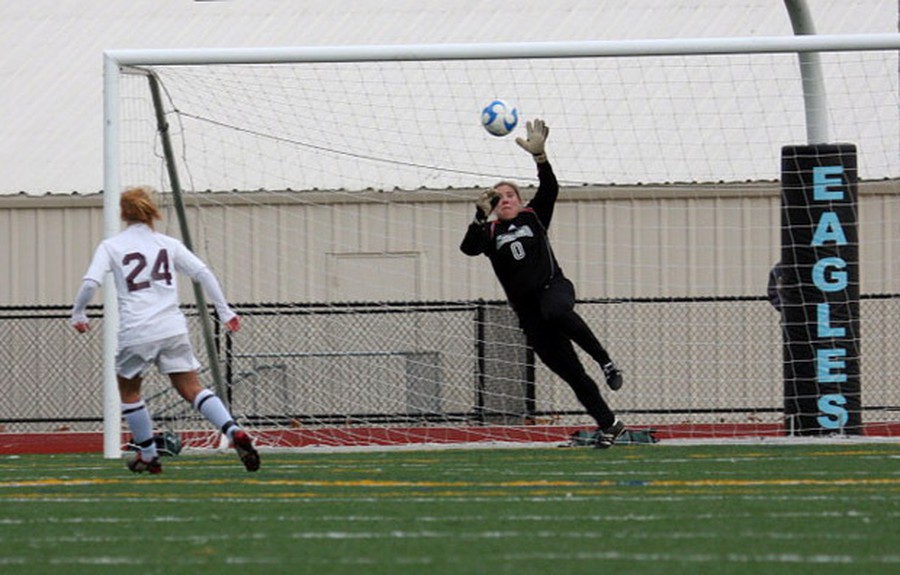 It was a tale of two goalkeepers: one to keep the game alive and one to win it.

If fourth-year Polly Cline had earned the prefixes of stunning, heroic, or clutch with her save on fourth-year Calvin forward Elizabeth Ribbens in the 87th minute of a 0–0 tie in the second round of the NCAA tournament, she gladly passed those titles on to first-year Emma Gormley, whose stop and ensuing goal gave the Maroons a shootout win and a ticket to fight another day.

With the Maroons (13–5–2) advancing to meet fourth-ranked Calvin (18–2–2) in the second round after a 4–0 win over Wittenberg (11–4–6) the day before, two teams who tied 1–1 earlier this season met in another defensive war. The match played out in waves of action hitting defensive breakwaters, and the offenses found no daylight until Ribbens’s run in the waning minutes of the game.

Ribbens had snuck behind the Chicago defense and was hurtling at top speed toward the goal, and Cline was the only player between the ball and the back of the net.

Instead, Cline came off her line, got low, and waited for Ribbens to make the first move. When the senior forward finally took her shot, Cline pounced on the ball.

The postseason run would continue, at least for a while, and Chicago and Calvin would have their futures decided by lucky guesses and fateful bounces.

“There are a lot of different things you can do [in that situation],” head coach Amy Reifert said. “I chose to rally the kids, to say to them, ‘Seize this opportunity. Take this moment. This is what we all play for.’ I tried not to say too much because I didn’t want them to over-think this, just step up and hit it, step up and hit it.”

Adding to the stakes for both teams was the knowledge that each had been kicked out of last year’s playoffs via shootout losses. The Maroons huddled near their bench, keenly aware of recent history.

“I think everyone who was on the team last year had visions of last year’s PKs in the tournament,” fourth-year defender Anne Scherer said. “I think that really motivated all of us even more to not let that happen two years in a row.”

It was slightly fitting, then, that first-year Emma Gormley, one of the only Maroons who had no memory of last season’s second-round heartbreak, was slated to go between the posts for the shootout.

“I just tried to go into [the shootout] looking at it like I’m not supposed to make those saves,” Gormley said. “If I do, that’s great, but you just can’t get too worried about it.”

Second-year midfielder Carly Prins stepped up for the Knights, who elected to take the first kick as the host. Gormley’s dive sent the curling shot away, and Scherer stepped up for the Maroons and fooled third-year Calvin keeper Kayla Sulzer for the advantage.

The Maroons maintained their edge until the fourth round, when second-year midfielder Emily Benoit had her shot pushed wide by Sulzer, evening up the proceedings.

Nothing separated the two teams through five shooters, so the contest went to sudden death. The Knights and Maroons traded successful spot kicks through the sixth and seventh rounds. Finally, at the top of the eighth round, third-year Calvin forward Natalie Veurink sent a high shot careening off the underside of the crossbar after a tip by Gormley, but the ball failed to cross the goal line.

The shock of Vuerink’s miss set up a moment of suspense, as Gormley herself strolled out with the ball, placed it on the penalty spot, and waited for her shot to end it.

Gormley’s shot was true, and as it swerved past Sulzer to the inside of the net, the Maroons erupted in ecstasy, swarming together to celebrate their hard-fought passage to the Sweet Sixteen. To emerge victorious from this encounter was not only an exorcism of last season’s disappointment, but also validation for their late-season run, which helped propel them into the playoffs.

“This was a win for everybody on our team,” Gormley said. “It was a huge effort...probably the greatest moment of the season so far.”

If Saturday’s stalemate with Calvin resulted from monumental defensive efforts and clutch goalkeeping, Friday’s first-round match against Wittenberg showcased Chicago’s effective and versatile offense, as the Maroons put up four goals against a team with 11 prior shutouts.

Speed proved to be decisive in the opening minutes, with the attack centered around fourth-year forward Olivia Ndyabagye. Within the first 20 minutes, she had put a shot just over the bar, pinged the ball off the post, had a one-on-one chance saved by fourth-year goalkeeper Jordan Bamberger, and flicked a pass across the mouth of the goal, looking for an assist.

Despite these early overtures, the Maroons’ breakthrough eventually came from a familiar pair of names. At the 23:09 mark, second-year midfielder Claire Denz won a footrace down the right wing, took the ball to the byline, and crossed it in past the keeper, where fourth-year midfielder Siggy Nachtergaele was waiting to tuck it away for a 1–0 lead.

Chicago continued their siege of Wittenberg’s defense, outshooting the Tigers 9–3 in the first half and doubling their lead in the 41st minute as a corner kick caused a scrum inside the Wittenberg box, where second-year forward Sarah Loh finally knocked in a rebound for her third goal of the season and a 2–0 lead.

Although Wittenberg came out of the break with a fourth defender, the Maroons added to their lead within 10 minutes of the restart. On a transition play, Nachtergaele released third-year forward Brooke Bontz with a long, weighted pass; all Bontz had to do was chip the ball over Bamberger to widen the lead to 3–0.

Bolstered by the three-goal lead, Reifert rested the bulk of her starting roster, mindful of the tight scheduling that would force the team to play another full game the next day.

It was two substitutes who combined for the Maroons’ fourth goal, when second-year midfielder Marcella DeLaurentiis crossed the ball in for first-year forward Haleigh Stopa, who struck home from close range, garnering first career points for both herself and DeLaurentiis.

In Chicago’s eight-game unbeaten stretch, they’ve outscored their opponents 15–3, and the back five has recorded five shutouts, currently running on a streak of three.

“We are covering each other and have complete confidence in each other’s abilities,” Scherer said. “We are finally hitting our full stride when it really matters. We stepped it up when we needed to and have kept us in games to allow our offense the opportunity to score. It’s definitely a complete team effort.”

The Maroons continue their quest Saturday against second-ranked Messiah, who broke Chicago hearts in the 2005 Final Four. Messiah provides not only a compelling grudge match but also a 20–0–2 record and a 105–8 goal differential, a high hurdle in Chicago’s run for the championship.