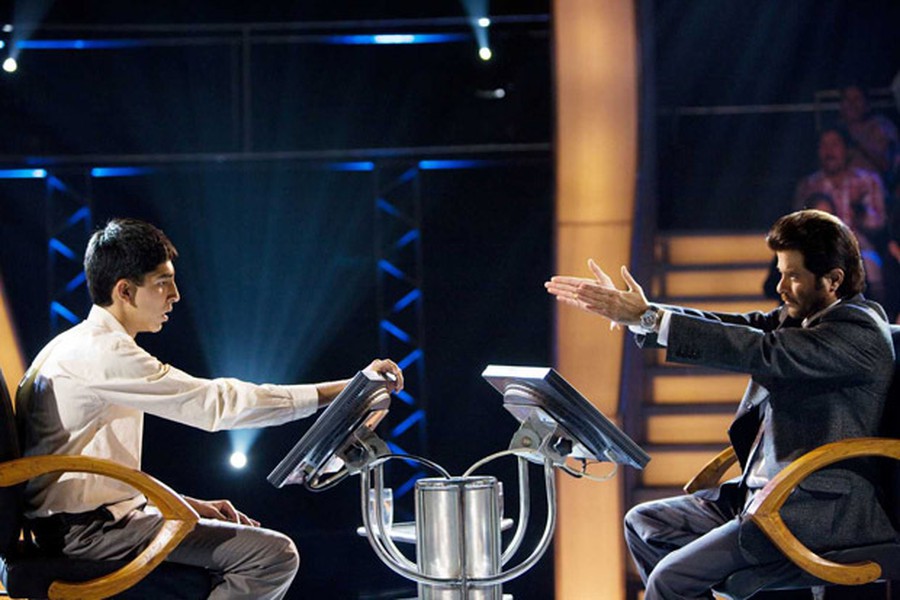 As the financial crisis continues with seemingly no end in sight, some have speculated that Hollywood may return to the Golden Age of the 1930s, when the country was still in the depths of the Great Depression. It was the movies’ job to provide an escape and inspiration to an audience whose real world was incredibly bleak. However, when people say, “They don’t make them like that anymore,” they mean that the old “good guy wins and gets the girl”–type movies have fallen out of favor with the general public. They are outdated and out of fashion; their sweet, simple storylines don’t seem to hold up in today’s world. Danny Boyle’s new film Slumdog Millionaire, however, somehow manages the difficult task of portraying an uplifting rags-to-riches story while still giving the audience a compelling, uncompromising, and thorough drama.

Slumdog Millionaire lifts its inspirational storyline directly from such films as It’s a Wonderful Life and Mr. Deeds Goes to Town, but it also borrows from films like City of God, a harrowing portrait of slum life in Brazil. While this may seem like a strange mix, Danny Boyle seamlessly integrates the two into this film. Millionaire follows an Indian boy named Jamal Malik from early childhood to his 20s, when he becomes a contestant on India’s version of Who Wants to be a Millionaire? While Jamal has never had an education, he manages to get further than any contestant has before because each question relates to a major event in his life growing up in the slums of Mumbai. The film recounts each of these events as Jamal gets closer and closer to winning 20 million rupees. To tie in the love story aspect, Jamal goes on the show to find his childhood sweetheart Latika, who has been pulled away from him by a series of tragic circumstances.

While the film will certainly appeal to a mass audience because of the nature of its storyline, its true greatness lies in its excruciating depiction of Indian slums. Boyle is known for his distinctive hand-held camera work and adrenaline-filled editing style on films like Trainspotting and 28 Days Later, but this is quite possibly his best film yet. He puts all of his technical skill to good use: The film is truly beautiful to behold. It moves at a rhythm that somehow constantly raises the stakes on Jamal’s story, even though the film’s ending is fairly predictable.

Boyle’s bravest choice, probably, is not to leave anything out or dilute the story in any way. Slumdog Millionaire does not shy away from the brutality and horror of slum life. Some of its moments would surely be implied and left off screen in a Hollywood movie, especially one that aims to be populist, allowing the audience to assume the worst. Boyle’s fearless approach not only makes the film a great treat for the average moviegoer, but also for those who like something a little more gritty and “important” for the price of their ticket.

All the actors in the film are Indian, so they will be mostly unknown to American audiences. Everyone puts in a strong performance, especially the children who play Jamal (Ayush Mahesh Khedekar), Latika (Rubiana Ali), and Jamal’s brother Salim (Azharuddin Mohammed Ismail) when they are very young. They are natural actors who draw the audience even deeper into the world that Boyle so beautifully places on the screen. The other standout is British actor Dev Patel, who plays Jamal while he is a contestant on the show. While he does not get to play the film’s more emotional scenes, he serves as the film’s anchor and makes an unbelievable situation feel realistic and true. He definitely deserves to be in the running for the Best Supporting Actor Oscar this year.

While the film is often upsetting, it still delivers on its escapist promise. The only catch is that it does this at a price. Perhaps this is not an imitation of the Frank Capra American films of the 1930s, but it is certainly in the same tradition. Slumdog Millionaire earns a happy ending—it is not in keeping with the brutality of the film, but it is a necessary relief to the audience and makes the film incredibly accessible. The film is certain to be remembered come Oscar season and will probably snag nominations for screenplay, direction, and picture as well as numerous other tech nominations. Slumdog Millionaire is only playing at Landmark Century Cinemas on North Clark Street, but it’s definitely worth the trip to the North Side to see a film that offers so many things to its audience.