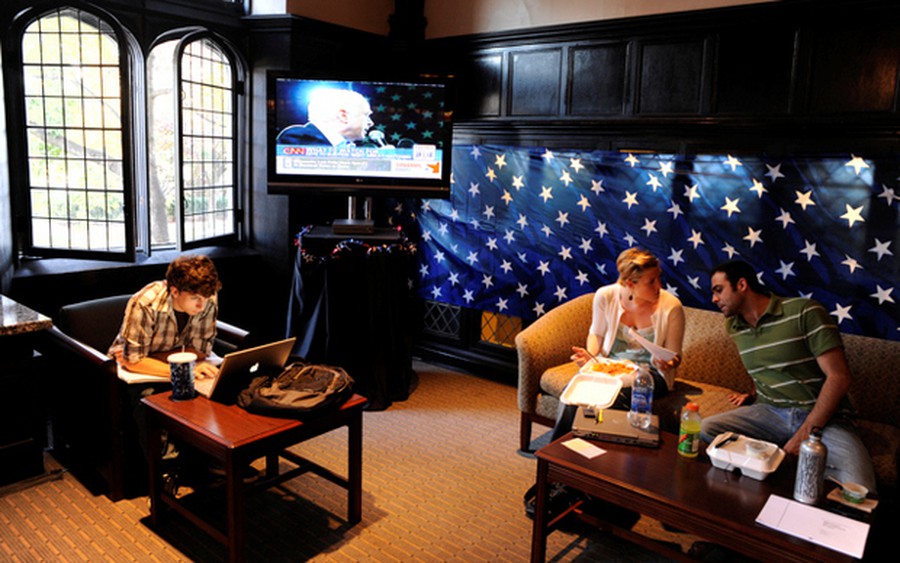 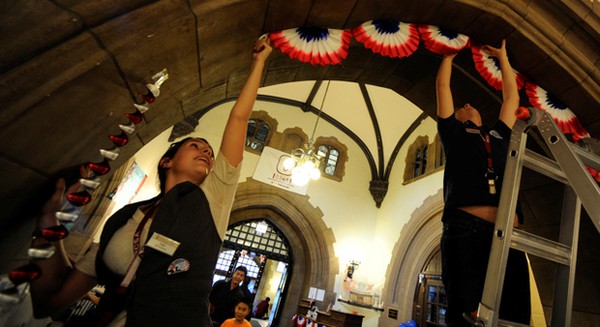 Thanks to ORCSA, which spent Tuesday afternoon feverishly preparing the student center for their election viewing party, the third event in a series called “The Color of Our Flags,” University students and families had a place on campus to gather and watch the election.

The halls of the Reynolds Club were filled with American Flag bunting, spangles and streamers for the party, and the rooms were filled with food provided by the UC Dems, College Republicans and Student Government, as were the rest of the event's provisions.

"It's always nice to experience history with people," said Dana Bozeman, Campus Activities Coordinator for ORCSA, before the event. Bozeman spent the afternoon decorating and the night coordinating. She came up with the idea for the “Color of Our Flags” series.

Its prior two events were town hall style meetings, in which different RSOs presented their views on the election. The UC Dems and College Republicans sponsored both.

Of the six rooms with televised coverage, Hutch had the largest crowd. Many did homework as the big screen played CNN coverage, while others followed the election results themselves on their computers.

The McCormick Lounge was more festive – even the bust of John D. Rockefeller was decked out in big, red, white and blue earrings. Students gathered around the two TV sets, positioned at opposite ends of the room as families mingled in between, including graduate student Ed Hayes’.

"We thought it would be a nice place for our children," Hayes said. "I seem to remember they said that somewhere in the e-mail they sent around, and sure enough, there are balloons."

The other rooms were emptier, including Hallowed Grounds, which had only a handful of viewers, despite its cotton candy machine. This was in stark contrast to the crowd that had gathered there to watch the primary results nine months ago on Super Tuesday.

Children played Bouncy Boxing in an inflatable boxing ring outside of Mandel Hall, which was the most somber place to watch the returns. Its screen was the only source of light in a room which never contained more than 20 or 30 people, who spoke in whispers, if at all.

According to Associate Dean of Students Sharlene Holly, was the first election returns party held in recent years. Although she said that the Obama rally in Grant Park was a big draw for University students, Holly expected the ORCSA event to be well-attended.

"Being at a party on campus is probably one of the most exciting places to be," she said.

The crowds did get excited at times. A cheer was raised in Hutch when CNN called New Hampshire for Obama, and again for Pennsylvania. The cheers grew stronger as Obama's electoral count grew.

"It's so clearly unanimous," said Hilary Leithauser, a third-year.

There was no cheer for CNN's hologram of musician Will.i.am.

The atmosphere in the Reynolds Club was merry throughout the night.

"I can't vote," said Hayes, who is English. But he called watching "a kind of proxy pleasure."