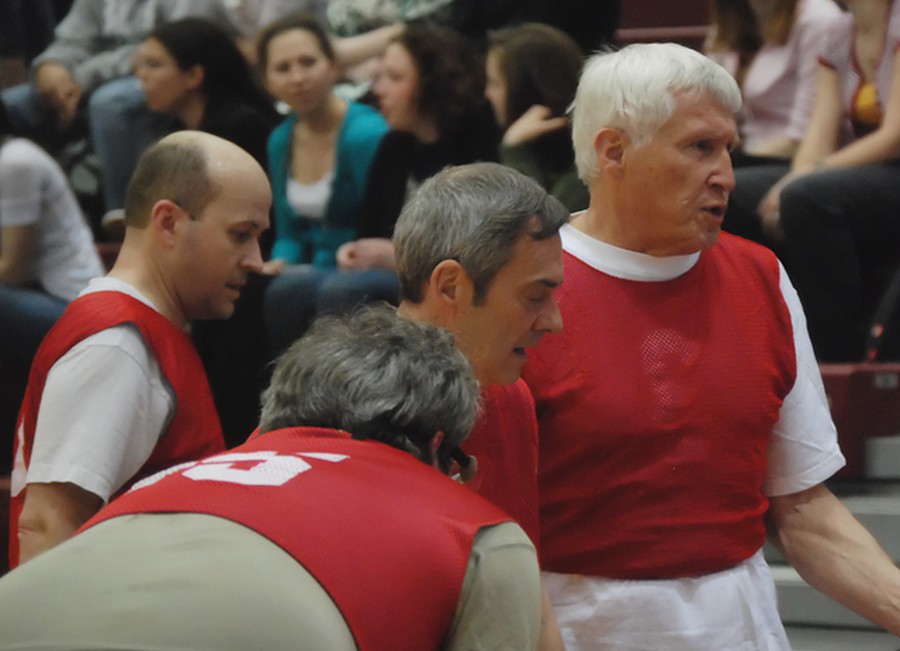 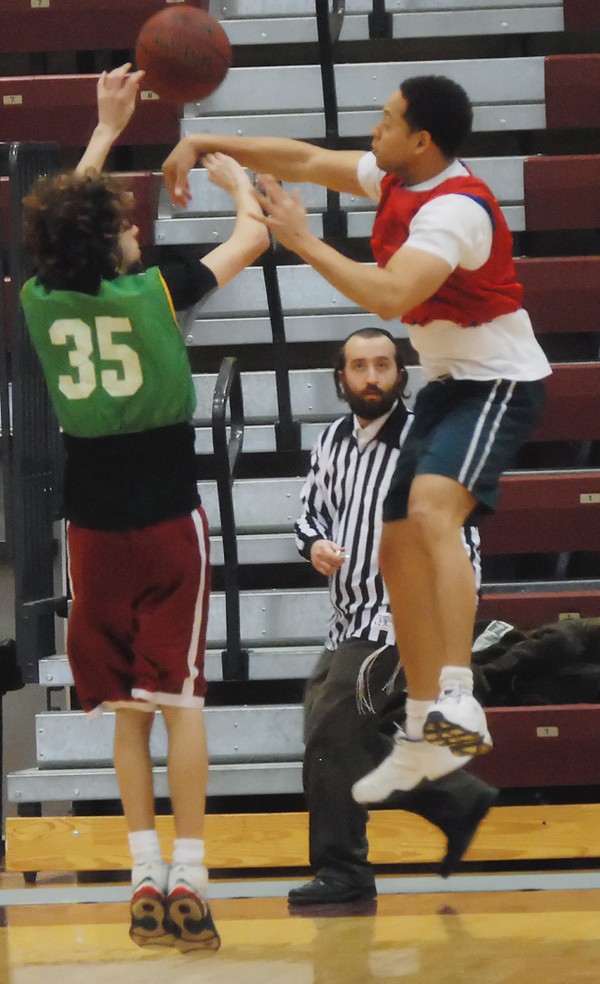 Pitting a team of academics from a variety of disciplines against brothers from several fraternities, the game was conceived as a fundraiser for Chai Lifeline, a group that provides services to Jewish children with terminal diseases. When the final buzzer sounded after 40 minutes of play, the fraternity brothers had cruised to a 46–36 victory, and the event had grossed more than $800.

Though the final tally didn’t show it, the game started out close, with the professors taking an early 4–0 lead. Coached by Senior Lecturer in Economics Allen Sanderson, the professors came out in a zone defense to slow the frats’ star gunners and looked inside to Assistant Professor of Mathematics Miklos Abert for their offensive spark. Abert, a former beach-volleyball specialist, used his combination of size and athleticism to control the paint, notching 14 points and pulling down 11 boards on the day.

“I am usually fairly good in rebounds,” said Abert, who plays basketball about twice a month. “The other team did not have a big enough guy to neutralize me.”

The professors had height in abundance, teaming Abert with Richard Rosengarten, the dean of the Divinity School, who stands 6 foot 4. But for all his size, Rosengarten, who played in Horace Grant–issue sports specs, barely got any shots off and was held scoreless.

After falling behind early, the fraternity brothers started pushing the tempo and shooting mid-range jumpers to counteract the professors’ size advantage. The academics had no match in their lineup for second-year Michael Sanchez, who could pull up from distance or drive toward the basket, and the brothers rode his hot hand to a 10–10 tie after the first quarter.

Perhaps feeling the pressure of the frats’ surge, the professors began shooting longer shots and got away from their inside game. Unable to hit from further out, the professors’ offense went quiet and looked helpless as the brothers built up their lead.

“We had more success ‘down low’ early,” said Sanderson, “but then started shooting from the outside too much, and we really didn’t get many offensive rebounds at all.”

Amid their second-quarter struggles, the professors did manage to come up with one of the game’s highlights. Four minutes before halftime, the psychology department’s Marlone Henderson came streaking down court to block third-year Julian Arnaud’s 10-foot jumper, swatting the ball out of play and giving the third-year a valuable lesson in dealing with rejection. Outside of that, though, the professors’ defense was as flat as their offense, and the brothers were up 25–14 at the break.

But the best basketball of the day probably came while the players were in the locker rooms. The halftime entertainment featured a “Sorority Shootout,” a series of games for the women’s side of Greek life. Participating were four varsity basketball players–third-year forward Alex Leach, second-year guard Micaela White, second-year forward Molly Hackney, and first-year guard Dana Kaplan. The quartet won two of the three events, with Leach taking knockout, Hackney around-the-world, and Kaplan getting narrowly edged out in the dizzy-bat race.

Once the sisters cleared the floor, the main game picked up again with more of the same from the students. In the second half, it was third-year Bill Altorfer leading the brothers, going 3–6 from the floor to finish with 10 points overall. Sanchez kept hitting, too, chipping in five second-half points to cap off a 14-point, 12-rebound effort.

After missing his only first-half shot, Sanderson started feeling it in the second stanza. An expert on the economics of sports and, judging by the cheers his shots drew, a crowd favorite, Sanderson was 2–6 in the final 20 minutes. At one point in the third quarter, he received the ball at the low block and fired an off-the-mark shot, only to snag his own rebound and lay it in for two.

“It was great fun. [That’s] easy for me to say now, just wait until I crawl out of bed in the morning,” Sanderson said after the game.

It was especially fun for the students, who carried a 19-point lead into the final period after third-year Stephan Skepnek buried a three to end the third quarter. The academics trimmed the margin in junk time but never threatened, and the brothers took home a 46–36 win and gold-painted statuettes of a man dribbling a basketball to commemorate their victory.

Organized by third-year Ross Boltyanskiy, the philanthropy chair of Alpha Epsilon Pi, the game is thought to be the first of its kind at the University.

“I wanted something that involves the students and the faculty, that brings together a lot of people and could be done for charity,” Boltyanskiy said, “and I thought a student–faculty basketball game sounded like it would be fun.”

Boltyanskiy hopes to make the contest an annual event. Sanderson said the professors would be game, but wasn’t optimistic about his team’s chances in a rematch.

“That would only mean the students, who could draw on an ample supply of replacement players, would essentially be the same age and we’d be a year older,” Sanderson said.