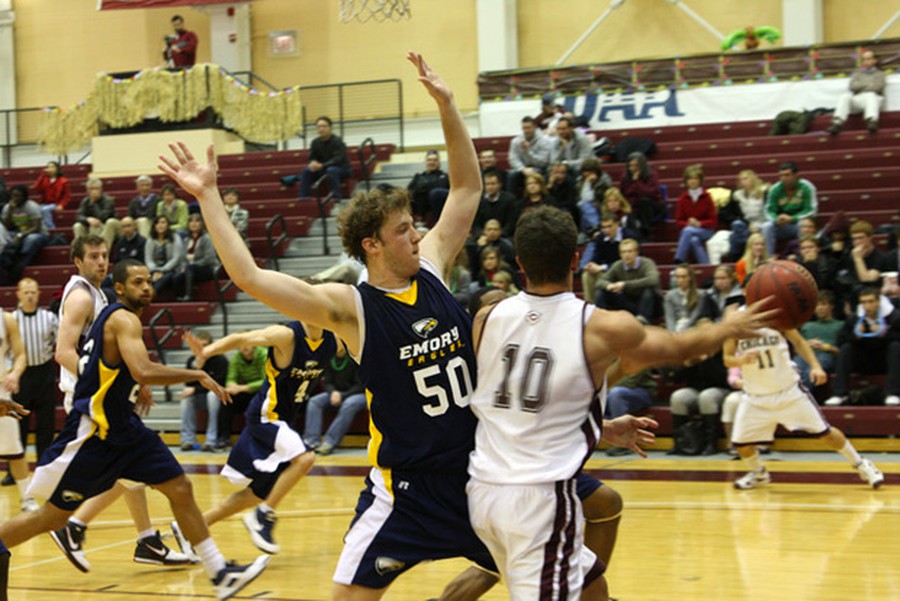 It’s only one game, but Friday’s win over Emory has men’s basketball breathing a sigh of relief and looking to carry some momentum into a four-game trip through the UAA.

It was a fitting win for this year’s Maroons (1–13, 1–2 UAA), whose 55–50 victory over the Eagles (5–9, 0–3) didn’t display pristine shooting or ball security. Still, the gritty win erased the zero that sat in the win column far longer than anyone would have guessed before the season started.

“I told somebody after the game, I said at the same time it was the ugliest and the best game I’ve ever seen here,” head coach Mike McGrath said. “I thought both teams played really hard defense, both teams struggled to make shots…. It was nice to get a win under our belts.”

Two days later, Case (5–9, 2–1) spoiled Chicago’s weekend by handing the Maroons an 83–75 loss that featured more struggles on both sides of the ball for the hosts. Now the South Siders will look to make improvement on a four-game road trip that begins today against 18th-ranked Carnegie (12–2, 2–1).

A middle-of-the-pack squad in terms of scoring offense and defense, the Tartans won eight straight games to start the season, relying on an intensity factor that never makes its way into the box score.

“They’re very physical,” head coach Mike McGrath said. “They play very, very hard, they like to push the ball up the floor, they play with a lot of confidence, and we’re going to have to really, really physically battle them.”

The Tartans will rely heavily on fourth-year forward Ryan Einwag, who averages 18.3 points a game, second-best in the UAA.

The Maroons then move from one prolific scorer at Carnegie to an even better one at Rochester (11–3, 2–1), where they’ll have to stop the conference’s top scorer, fourth-year guard Mike Chmielowiec.

“They had a really well balanced team the last couple years, but I was always impressed with [Chmielowiec’s] play and his toughness,” McGrath said. “I thought now that some of those other guys are gone, he’d make some plays, and apparently he’s been doing that.”

While Chmielowiec scored just 24 points total in his last two games, he has tallied seven 20-point performances, including a 32-point showing earlier this month at NYU.

“They’re going to execute very well offensively and get him good shots, and we’re going to have to take away what they do to get him shots,” McGrath said.

Sitting sixth in the conference standings, the Maroons are focused on improvements in the near future, starting with better defense.

The Maroons overcame defensive lapses that kept Emory close throughout Friday’s contest, but more faults on defense against Case allowed the Spartans to hold off a late Chicago charge.