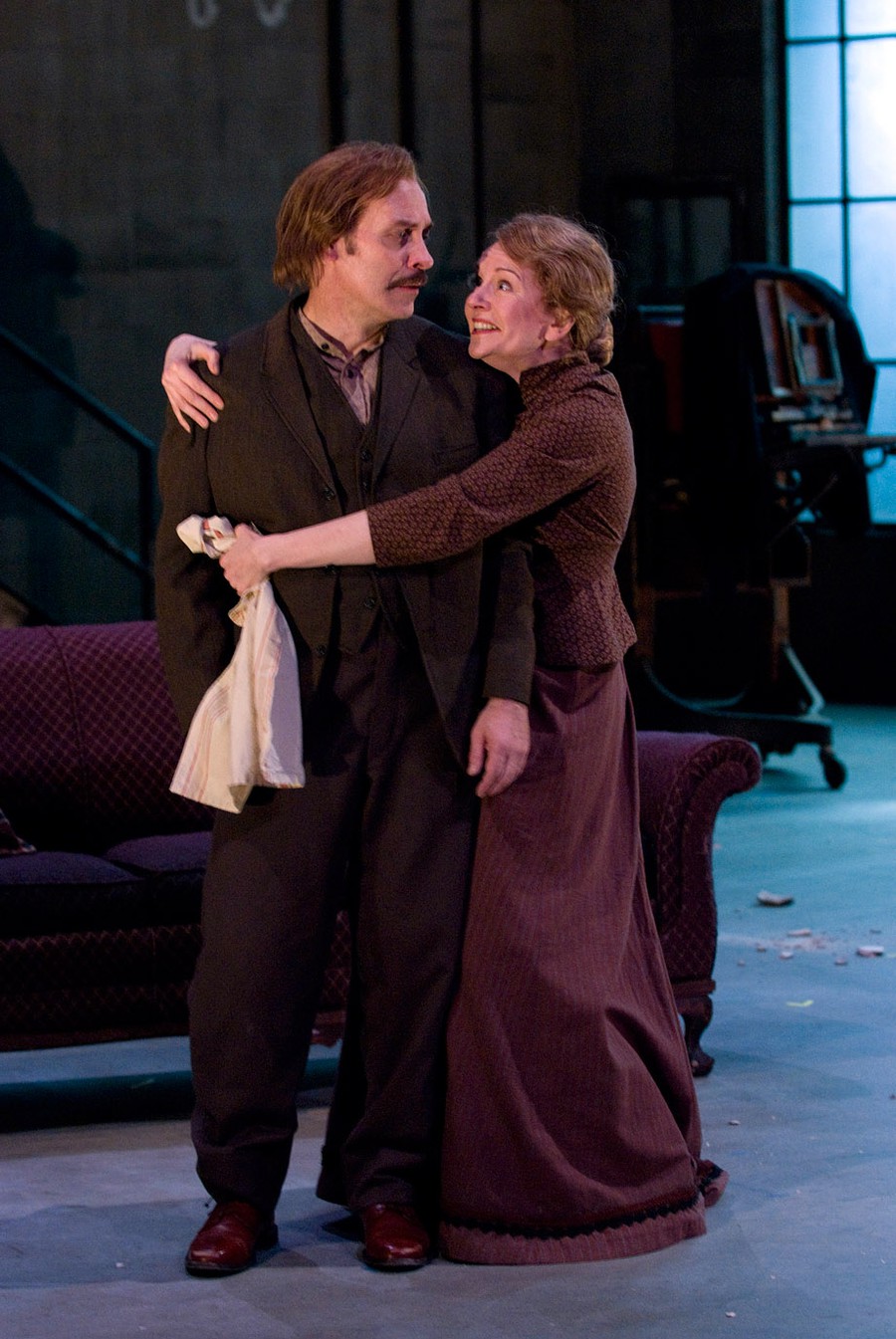 Court Theatre’s The Wild Duck is a poignant black comedy that exposes the inherent fragility of family life, all the while provoking guilt-ridden laughter. With bold acting decisions and subtle set design, this adaptation does justice to Henrik Ibsen’s complex script while offering some creative innovations.

Gregers Werle, the son of a wealthy merchant, has abandoned his father’s affluence in a youthful attempt to achieve independence. He works in a rural area far away from home, which the older Werle considers unfitting for his son. Nonetheless, the play begins with Gregers reluctantly returning home to attend one of his father’s bourgeois dinner parties.

In order to have some friendly company during the oppressively formal event, or to provide himself with some sort of distraction, Gregers invites his old friend, Hjalmar Ekdal, to attend the party with him. Far removed from the mingling and party music, Gregers and Hjalmar amicably catch up with each other after years of separation. Even when he is alone with Hjalmar, Gregers’s nervousness and jerky gestures betray the contempt he feels for his father’s stuffy world.

This discomfort only worsens when Gregers learns that his father has taken a special interest in Hjalmar’s affairs. Not only did the elder Werle introduce Hjalmar to his wife, Gina, but he also paid for his education in photography. Gregers’ subsequent bewilderment and suspicion is in stark contrast to his friend’s affection for the old man. His anger grows, leading him to think that the philanthropic patriarch has some ulterior motive for meddling in the Ekdals’ affairs. Despite his father’s denial, Gregers is convinced that there is some foul play and vows to do “what must be done” to help the Ekdal family. This is the basis for the rest of the play, with Gregers trying to help the Ekdals reform their family life and show Hjalmar his father’s supposedly true intentions.

The majority of the production takes place in the spacious Ekdal residence, which contains little furnishing and a very high ceiling. Immersed in gray and brown tones, the household appears barren and ominous, yet modest. Eeriest of all is a forgotten advertisement, a giant bespectacled pair of eyes­­—reminiscent of Fitzgerald’s Doctor T.J. Eckelburg—printed high on the back wall. Much like Doctor Eckelburg’s abandoned billboard, the faded eyes on the Ekdals’ wall suggest that the house has seen better days.

Of all the performances in the play, Jay Whitaker’s highly physical and character-driven portrayal of Gregers is the most notable. With a hunched neck and stiff shoulders, he shuffles across the stage in a manner that is almost out of place in Ibsen’s bleakly realistic setting. His slight overacting serves the character well, conveying his status as an intruder in the Ekdal household. He’s like some horribly misguided family counselor whose brand of hands-on therapy seems to only cause more conflict and misunderstanding.

However, even before Gregers tries to “help” the Ekdals, the cracks in their family bonds are painfully apparent. Hjalmar’s wife and his daughter, Hedvig, scramble around the house to make sure that everything is in perfect condition for Hjalmar. Meanwhile, Hjalmar seems to do little more than complain and pontificate about his very important work. Additionally, the sudden, vicious quips between Hjalmar and Gina reveal the buried tension in their marriage.

Even amidst the fiercest family rows, Ibsen writes in surprising moments of clever humor. In the true form of a black comedy, the jokes are not a light relief from the drama, but rather new elements of the tragedy. In one hilarious scene, Hjalmar angrily storms out of the house, only to quietly sneak in moments later to search for his forgotten hat. While genuinely funny, the scene also highlights Hjalmar’s pathetic absentmindedness and his dependence on his family.

The Wild Duck manages to entertain while simultaneously posing difficult questions about the nature of family relationships. Gregers believes that tearing down deceptions and brutally revealing the truth will give the Ekdals a “foundation” for a “true relationship.” But the more truth that emerges, the more tenuous the Ekdals’ relationships appear.

Anyone who knows the Chekhov’s gun rule can figure out the climax. But the state of the Ekdal family at the end of the play still leads the audience to the unsettling conclusion that sometimes, only ignorance can preserve bliss.