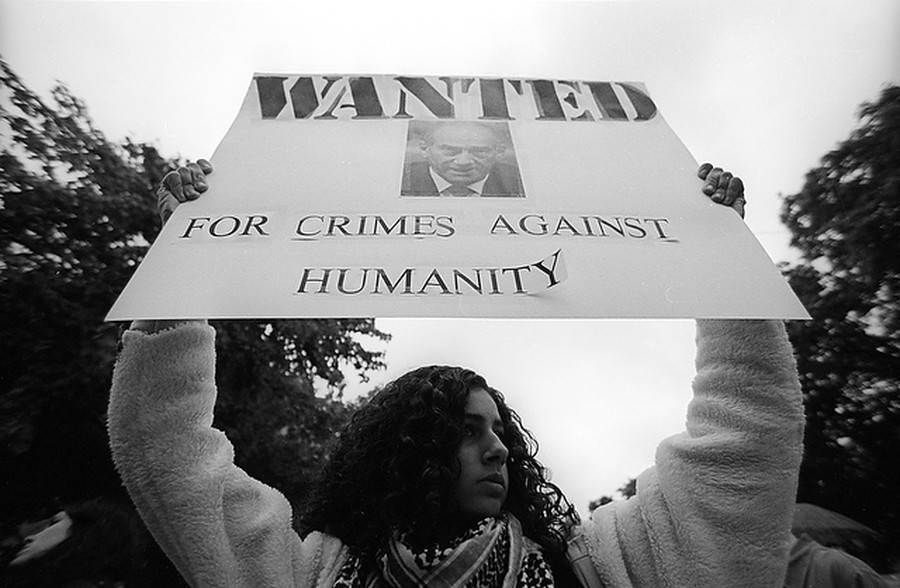 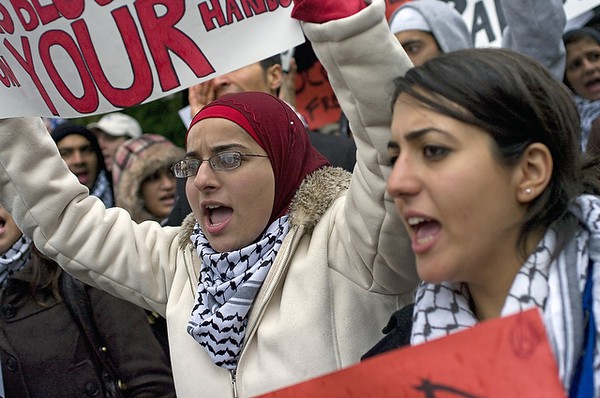 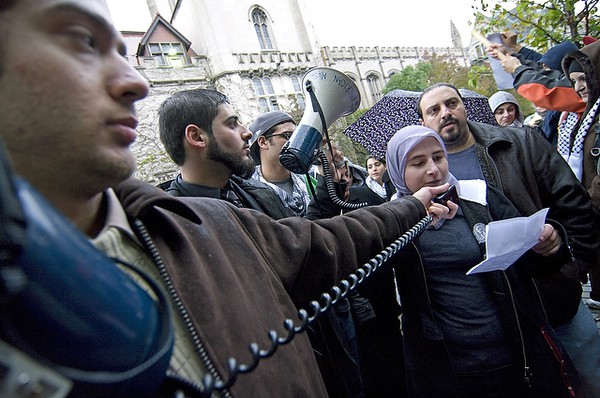 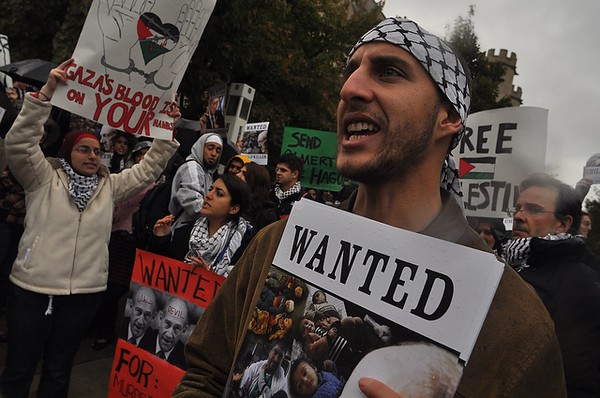 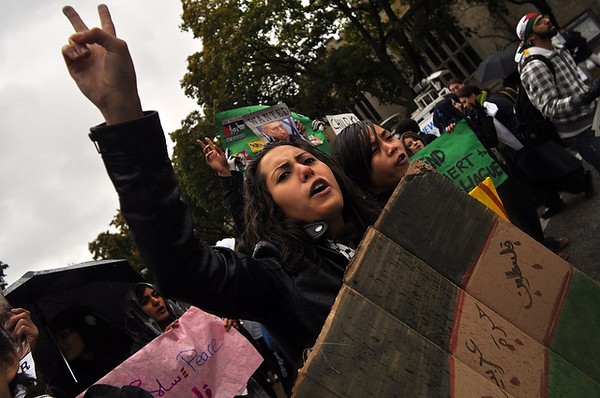 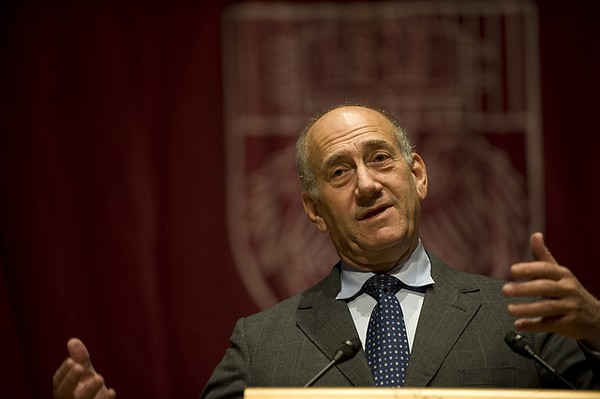 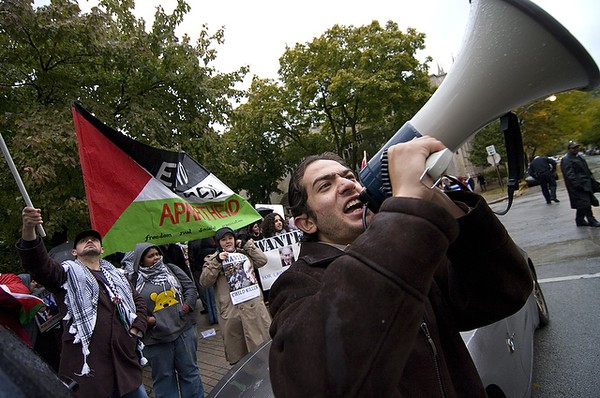 Former Israeli Prime Minister Ehud Olmert struggled to make himself heard over a cacophony of protests in Mandel Hall Thursday, in what became more of a free-for-all than an international policy lecture.

Dozens of protesters inside the auditorium, and over 100 more outside, voiced their fury at alleged war crimes committed by Israel in Lebanon and Gaza during Olmert’s tenure. Meanwhile, Olmert articulated a two-state plan for peace in the Middle East, which has Israel sacrificing nearly all of the West Bank, Gaza Strip, and Golan Heights land occupied since the Six Day War in 1967.

The scheduled running time for Olmert’s remarks was 20 minutes, but ran nearly an hour-and-a-half after a series of false starts. Shouting from the audience dominated the event from the beginning, and ranged from the extreme to the absurd.

“You deserve to be executed!” shouted one protester. “Your face is ugly!” yelled another.

“I understand these emotions. There is the same rage from voices on the right in Israel,” Olmert said, referring to those who criticized his moderate party for giving concessions to Palestinian negotiators.

The lecture was part of the King Abdullah II Leadership Lecture series organized by the Harris School of Public Policy. Some protesters raised concerns that using the King of Jordan’s grant money to fund the lecture was a slap in the face to the Arab world.

Olmert’s remarks, fragmented and often inaudible, centered around a four-point peace plan he supported towards the end of his tenure as prime minister.

Olmert’s plan called for Israel to give the Palestinians land in the West Bank and Gaza Strip that it occupied after the 1967 war, and for Jerusalem to be split into an eastern Palestinian portion and a western Israeli portion. Further, he advocated that the ancient religious sites in the Old City area of Jerusalem be administered by an international coalition, and Palestinian refugees be provided with resources to start new lives in Palestine.

“We have to make a choice of what we want. Do we want to fight these people forever, or do we want to make peace?” Olmert asked. “If people shouted less, we could have done great things.”

U of C student organizations, including the Muslim Students Association, Students for Justice in Palestine, and groups from the University of Illinois-Chicago (UIC) and Northwestern came to protest the talk.

Approximately 200 protesters gathered across from the Reynolds Club on 57th Street to denounce Olmert’s speech. The crowd waved large Palestinian flags and banners emblazoned with Olmert’s face and the phrase “war criminal.” Organizers with megaphones led the assembled crowd in chants of “Free, free Palestine,” “From the river to the sea, Palestine will be free,” and “No Justice, No Peace.”

The crowd cooperated without complaint as police requested they stay on the curb. While loud, the crowd did not threaten violence.

Across the street on University Avenue, a group of six counter-protesters held up signs reading, among other things, “Let Israel Live in Peace.”

“You’re a fucking snake! You goddamn pig!” shouted one heckler as police dragged him from Mandel Hall.

Olmert drew some of the most vehement responses when he asserted Israel’s right to be the Jewish homeland.

“Jerusalem was never not Jewish,” Olmert said. “This is where the Jewish people were born thousands of years ago. I think if you dig in the ground you will not find a single trace of the Palestinian people.”

Characterizing the offer he made Palestinian negotiators in 2008 as “unprecedented,” Olmert saw Palestinian refusal of those terms as a critical failure of their leadership.

“They will not find any prime minister in 100 years who will offer what I did,” Olmert said.

Security at the talk was strict; all audience members were screened through a metal detector, and some were frisked. Dozens of UCPD, CPD, and Secret Service agents, as well as Israeli Mossad agents, monitored both the inside and outside of the auditorium.

The tension frequently broke into physical confrontation as police forcibly escorted protesters out of the auditorium.

At one point, a heckler was confronted by a plainclothes officer in the same row, and asked to leave. After a heated exchange between the two, the officer put the protester in a headlock, tackling him into the seats. Nearby audience members stood and attempted to break up the two, and someone shouted that that the protester was “assaulting a police officer.”

One unidentified protester was arrested for criminal trespassing, according to deputy UCPD police chief John Doty.

In a question-and-answer session after Olmert’s remarks, the former prime minister was asked about former U.N. ambassador John Bolton, who gave a speech in Mandel Hall Tuesday. Bolton recommended the Israeli government attack Iran “as soon as possible,” the questioner said, in response to Iran’s possible nuclear weapons program.