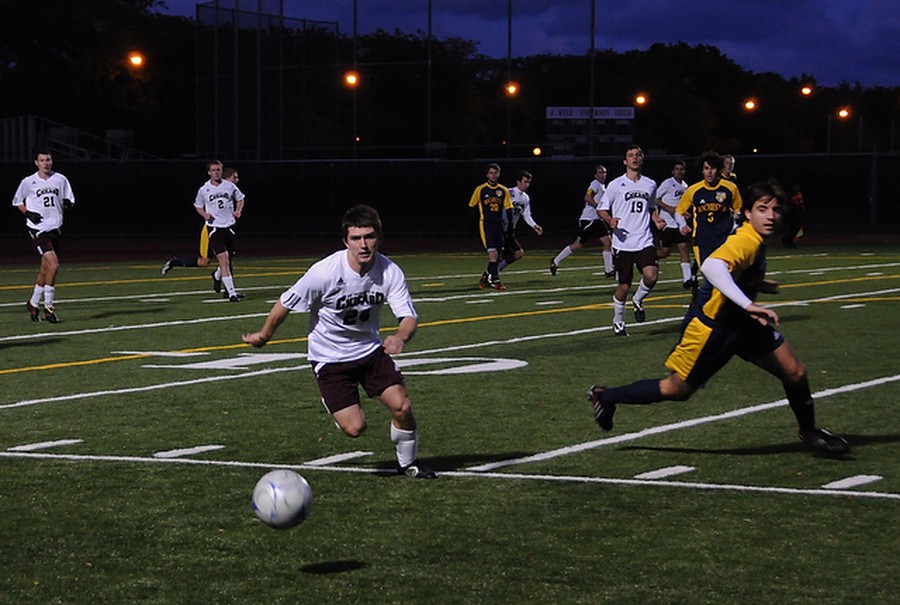 The timing on second-year midfielder Stanton Coville’s final shot against Rochester couldn’t have been better.

It wasn’t just that there were only six seconds left in the first golden-goal overtime. The Maroons had waited eight years—by that point, eight years and 100 minutes—to beat the Yellowjackets, who came into Friday night’s game ranked seventh nationally. Coville, one of Chicago’s most potent threats up top, had waited 10 career UAA games for a goal, and was playing with his family in the stands. And the Maroons were putting on one of their best shows of the season.

The time, in short, was ripe, and Coville took advantage. After a steal by fourth-year defender Gabe Iatarola, the ball reached Coville’s cleats by way of first-year midfielder Garret Laird, and Coville fired near post from the right side, 15 yards out. The shot bounced down off the crossbar and in, sealing the win just moments before the horn would have ended the overtime period.

“I was actually running at a weird angle, and I don’t really remember too much of it, I was so excited,” Coville said after the game. “I remember hitting it and thinking my intention was just to put it on goal or put it across goal, and then I remember turning around and seeing the ball in the goal.

“You kind of don’t know what to do after a goal like that,” Coville said.

Of course, it wasn’t completely up to him. Coville’s teammates mobbed him on the field, while the home crowd whooped and yelled from the bleachers.

The goal was only the first game-winner of the weekend for Coville, who also finished a penalty against Case on Sunday, the opening goal in Chicago’s 3–0 handling of the overmatched Spartans.

The Rochester win, which keeps the Maroons in the thick of the UAA race despite their earlier loss to Carnegie, prompted head coach Scott Wiercinski to tell his players that he hadn’t been so proud in his four years at Chicago.

“I’ve never quite had a win like that,” Wiercinski told me later. “Against a team that good, and a team that plays a style that’s the Achilles’ heel of our program, in the sense that they’re big, physical, and aggressive. In the past we haven’t dealt well with opponents like that.”

The Maroons now sit tied with the Yellowjackets for second in the UAA, a game behind Carnegie. Whether you’re judging by their play on the field or the numbers in their box scores, the squad is doing markedly better now than they were this time last year, and Wiercinski, who was optimistic in the preseason, said the team has surpassed his expectations.

“We are so much more of a team that works towards one end,” Wiercinski said, “rather than 11 guys who are really talented at soccer, and they score goals more than their opponents and so they win.... Everyone’s giving the team what every player can give.”

If you’ve ever wondered what compels Chicago’s rowers to wake up at 4 a.m. so they can be on the water for 5 a.m. practices, the results from this weekend’s Head of the Charles Regatta might give you some idea.

The teams, which practice early in the morning partly to avoid conflicts with class schedules and partly to avoid boat traffic, had never done so well at the Head of the Charles, one of the largest and most competitive regattas in the world. Fourth-year men’s captain John Dyer, who competed in the collegiate four, said the club made progress in recent years as strong recruiting found more and better talent, and that progress was reflected on the Charles.

“We had a very good race,” Dyer said of both the men’s and women’s collegiate four, before correcting himself: “We had an amazing race.”

And that’s in spite of racing teams with better funding, from larger schools with longer histories of success. Whatever it is the Chicago crews do out there on those dark mornings, at least now they’ve got the results to prove it’s working.

When Macalester (2–5), football’s opponent this weekend, scored their last touchdown and converted for two, putting the Scots up 24–21 with 46 seconds to play, the Maroons’ (3–2) odds didn’t look good.

When first-year wide receiver D Brizzolara returned the ensuing kickoff 43 yards, to the Macalester 38, there was a glimmer. And when two Brizzolara catches and a pass interference call brought Chicago to the 15-yard line, within field goal range and with time enough to take a few shots at the end zone, well, that’s what’s known in football circles as a really positive development.

So I figured that when third-year quarterback Marshall Oium hit third-year wide receiver Clay Wolff with a pass for the winning touchdown, completing a wildly improbable, last-minute rally and putting the team over .500, the response would have been pure elation. And partly, it was.

“It was such a huge thing for us to pull out that win,” Oium said, “and it was a result of everyone on the team playing their best football in those closing minutes.”

But as Brizzolara pointed out, even though the cardiac comeback was good, the day could have gone better.