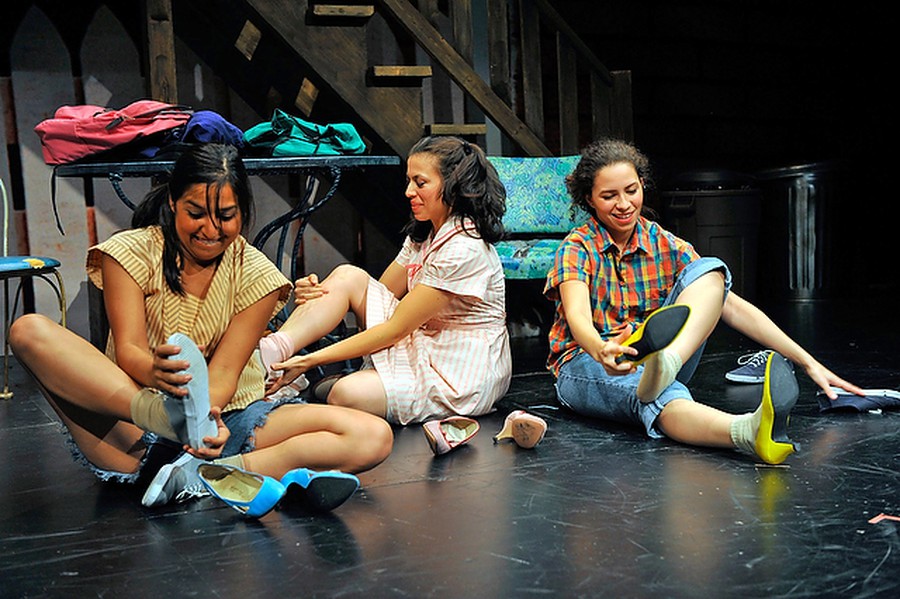 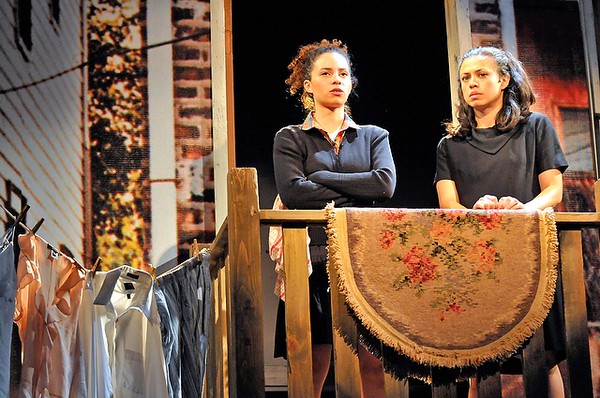 Mexican music transforms the classic Chicago novel The House on Mango Street, by Sandra Cisernos, into another fantastic production at Steppenwolf Theatre. The House on Mango Street opens Steppenwolf’s Young Adult series this season with singing, drums, and guitars—an unexpected divergence from a traditional novel adaptation. However, it stays true to the novel’s theme of the difficulties of growing up, employing ever-present music and particularly touching acting.

In the play, Esperanza Cordero (Sandra Delgado), a young Mexican-American girl, chronicles a year in her life on Chicago’s Mango Street. Esperanza feels disconnected from her neighborhood and ashamed of its lower socio-economic status. She longs to move away from her tiny house on Mango Street to a real house on a hill. As the year passes, Esperanza matures physically, emotionally, and mentally. She gains hips, endures the death of loved ones, and writes constantly to cope with the changes in her life.

The novel unfolds as a series of vignettes, as does the play. However, the production uses certain devices to add some continuity. Esperanza has many monologues, during which she gives her perspective on recent events. Esperanza’s distinctive descriptions, such as comparing herself to a tethered red balloon, are employed throughout separate vignettes and help to form a coherent story. Many of her idiosyncratic phrases and dialogue is taken directly from the book, further serving as a link between the two media.

The main innovation of the production is the incorporation of music into the performance. Some of the music is understood to be contiguous with the scene at hand, such as when the characters are at a dance. In contrast, some of the songs are separate from the reality of the scene, such as the solo Esperanza sings toward the end of the play. All of the different songs, however, have a similar sound, which also helps bind separate scenes together. The instruments—mostly guitars and drums—help create this continuity, as do certain melodies that are repeated in multiple songs.

The various glues that hold the constituent parts of Mango Street together—Esperanza’s monologues, her descriptions, and the music—are important not only because they create commonality, but also because most of these scenes lack resolution in and of themselves. It is only by viewing these separate pieces as parts of a whole that the audience understands that plot development, the slow transformation of Esperanza, has occurred. All of these individual moments have a role in Esperanza’s maturation from a girl to a young adult.

Delgado succeeds admirably in portraying Esperanza’s sadness and occasional anger. Rachel (Christina Nieves), the sister of Lucy, who is one of Esperanza’s friends, is a particularly memorable character. Nieves emphasizes Rachel’s youth and enthusiasm, making it all the more touching as she attempts to cope with the death of her baby brother. Perhaps one of the most enjoyable moments in the play is when Esperanza, Rachel, and Lucy (Belinda Cervantes) all climb aboard a bicycle and cheerfully ride it up and down the block. Mari Stratton, who plays Mama, has a lovely voice, and her gentle singing provides a nice change of pace from the play’s dance music.

But despite these clear successes, the play is not without its problems. Although the music helps to tie the play together, none of the songs are particularly memorable. One may recall Stratton’s voice, but the words or message of any specific song is lost. Also, some of the group numbers seem to be more appropriate for a Broadway musical than for a rather serious, straight play like Mango Street. In addition, although casting adults as 12-year-olds works in the cases of Esperanza, Rachel, and Lucy, having a grown woman play with dolls is disconcerting in the case of Nenny (Gina Cornejo), Esperanza’s younger sister. The fault lies not in Cornejo’s acting but in the fact that she has very obviously graduated from college and consequently looks somewhat odd in the role of a little girl.

Despite these small faults, whether by love of the book, or interest in the play and its Chicago roots, audience members are sure to be drawn to Steppenwolf’s production. The House on Mango Street serves as a reminder not only of the difficulties of growing up, but also of the fact that no matter how old we grow and how far away we move, home is an irresistible force that always draws us back to our beginnings.