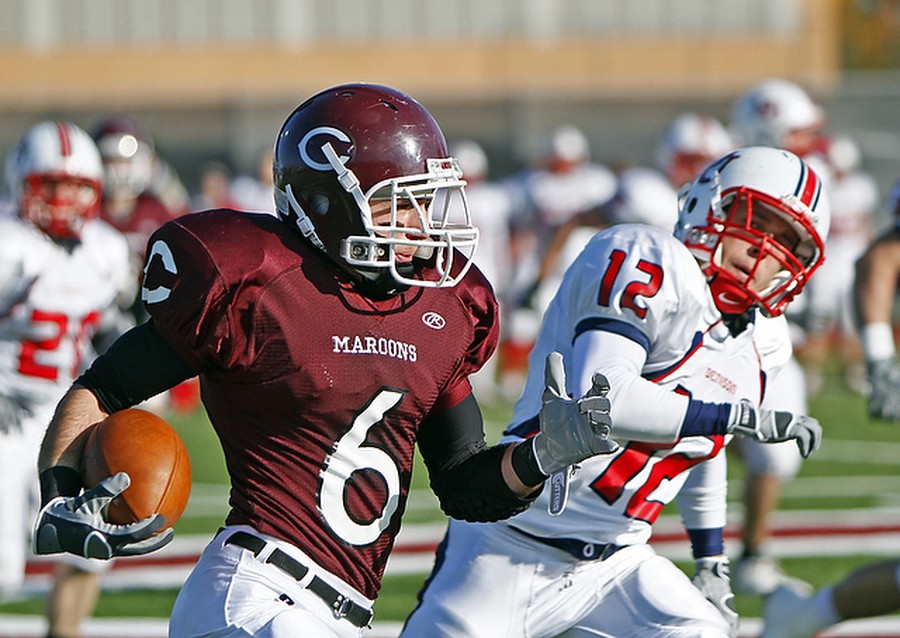 On a day celebrating Chicago’s historic 1969 football team, who revived the sport 30 years after it was disbanded at Chicago, third-year quarterback Marshall Oium made some history of his own.

With the 1969 squad looking on from the stands, Oium threw for 472 yards and five touchdowns, both school records, as the Maroons (4–2) launched an aerial assault to fly past Denison (2–5) 38–7 on Homecoming Saturday at Stagg Field.

“We saw them playing a lot of zero coverage, a lot of man-on-man on the outside,” Oium said. “They were out of position and we took advantage of it through the air.”

“D is such a raw talent, really fast—needs to work on his route running—but just a great receiver and a huge addition to this team,” Oium said.

It was Brizzolara’s speed that killed on Saturday as he beat the helpless Denison defensive backs for touchdowns of 73, 25, and 16 yards.

“We knew they were playing a lot of man-to-man. We thought I would be faster than most of their corners, so Marshall and I knew we could take shots deep and we did. It worked,” Brizzolara said.

Brizzolara, who entered the game as the D-III leader in all-purpose yards this season, attributed his success not only to his natural burst of speed but also to his teammates.

“A huge part of it is our special teams; I get a lot of my yards on kick returns. Marshall throwing me the ball and getting me the touches helps, too.”

Oium connected with Brizzolara on seemingly identical touchdowns—utilizing perfectly timed fade routes—on consecutive drives in the third quarter to put the game away.

“[The fade route] was really a huge route. It gives us a lot of yardage and easy completions; it really helps,” Oium said. “We work a lot in practice throwing to our receivers, getting our timing down right, and it really paid off today.”

The Oium-to-Brizzolara connection actually began with a hectic 73-yard play in the first quarter.

“Marshall was actually throwing it to [wide receiver] Clay [Wolff] and the defensive back tipped it and almost got an interception. I caught the ball after it was tipped into the air. I just made a play,” Brizzolara said. “When the ball was thrown over there, I saw it was thrown a little bit long, so I ran over there and got it.”

Oium completed 24 of 45 passes and set Chicago records for single game passing yards and touchdowns despite ending his day with over twelve minutes left in the game.

It helped that he was barely touched as the Maroon offensive line extended its streak of games without yielding a sack to three.

“The offensive line did a great job. No sacks is pretty much unheard of against a team like this when they put nine guys in the box,” Oium said.

The Chicago defense matched the offense’s sterling effort by holding Denison to 57 yards passing and only 192 yards total. They shut out the Big Red until there were less than four minutes left in the game and the majority of the Maroon defensive starters were on the sideline.

“The game plan was to stop the run because they love to pound the ball,” third-year cornerback Steve Tsilimos said. “We knew we had to take away their big plays because when they do pass it they like to go down the field.”

Tsilimos helped to make sure Denison had no success on its long-range strikes as he shut down their passing game with two interceptions.

“I just ran with them, I turned my hips, I found the ball, and I went up and got it.” Tsilimos said.

Nearly two thousand fans packed the stands to see the homecoming festivities and to recognize the trailblazing 1969 team. Members of the squad served as honorary captains and participated in the opening coin toss, followed by a tribute at halftime of the game.

Next Saturday at noon, Chicago will kick off UAA play against Case (7–0), which comes to Stagg Field with a 28-game regular season winning streak on the line.