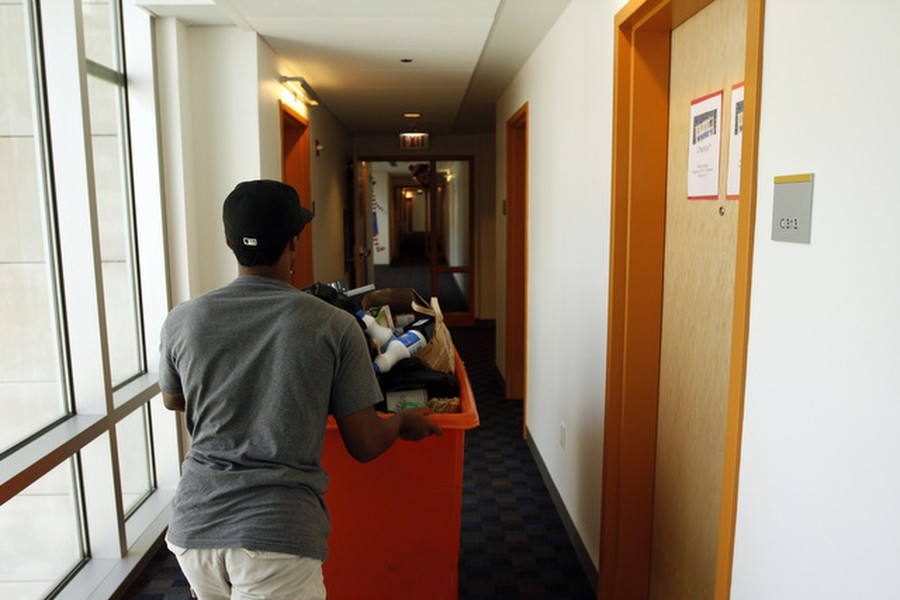 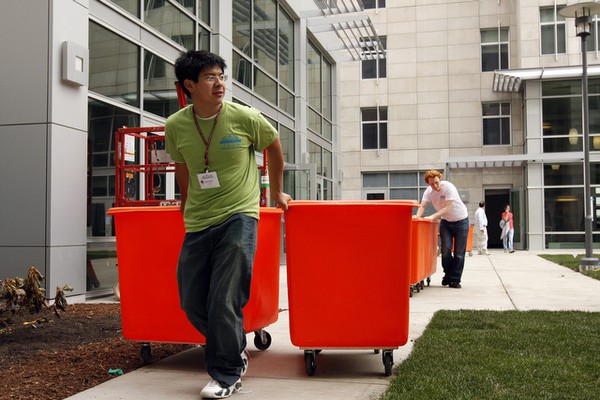 First-years moved into the South Campus Residence Hall for the first time last Sunday, but some reports suggest that the building may pose hazards and might not have been ready for the incoming students.

Move-in was characterized by lanes of idling cars bumper to bumper down Ellis Avenue, and the atmosphere was a mixture of confusion, exuberance, and frustration.

“Is Chautauqua inside or outside?” one O-Aide yelled to another, as a clearly frustrated parent walked up to figure out how his minivan got into the wrong lane. Orientation staff near the main entrance loaded televisions, mini-fridges, and other supplies into bright orange bins.

“It’s as organized as it could have been,” said third-year North de Pencier, a Halperin House RA, “especially since most people are moving in today.”

Katie Callow-Wright, director of undergraduate housing, said about 90 percent of incoming students moved in on Sunday. “This was the first time new student opening was spread over two days,” she said. “It was a very smooth process in uncharted waters.”

Third-year and Halperin RA Kyle Church did notice the usual move-in congestion: “There were people starting to line up at 8:30, even though no one could move in until a few hours later.”

Most of the day’s conversation, however, centered on the building. Reactions were as varied as the students moving in.

“My room is really nice, it’s really big,” said Jack Manley, a first-year from Bronxville, NY living in Oakenwald House. “It’s so clean and new and comfortable. At NYU the rooms are like prisons.”

“It’s soulless. It could be a furniture show,” said less enthusiastic Halperin House first-year Maximo Saldana-Guerra. “The newness bothers me.”

Overall, though, the dormitory seemed to be well-received, even by those who wouldn’t have the opportunity to live inside.

“I’m kind of jealous,” said fourth-year Sean Burns from outside the building. He and third-year Chloe McCabe had gone inside to explore, but were turned away by Housing staff.

“We got escorted out,” McCabe said, “but we’re probably going to go back in.”

Some confusion about the layout of the building distracted students. “It’s like a maze,” said first-year Melissa Scott of Crown House.

The hallways weren’t the only architectural elements to confound students. “The men’s rooms don’t have urinals,” Manley said. “For a while I thought I was in the women’s room.”

Both students and some staff have described the dorm as incomplete. Some rough edges are cosmetic: The ubiquitous blue tape covering cracks in windowpanes, unspackled walls and columns, and screws lying in sinks and on desks.

Other problems are more dangerous. Third-year Michael Lipkin, a Wendt House resident and news editor of the Maroon, went to open his window to cool off after a long day of carrying boxes.

“It needed a lot of effort to push it out. I gave it a hard push on the handle, and the thing just flew open, at maybe a 60 degree angle,” Lipkin said. “My balance was definitely thrown, and my arm was maybe three feet out into the open air. My head had gone out the window too.” After a precarious moment, Lipkin was pulled back into the eighth-floor room by his waist.

“I’m pretty terribly afraid of heights,” Lipkin said, adding that there was easily enough room for an average person to fall, or climb, out.

“The dorm isn’t finished,” said one SCRH facilities worker who spoke under the condition of anonymity because he wasn’t allowed to discuss construction details. “Some windows haven’t been installed properly, the café isn’t done. They’re opening it to get the first-years in, but it shouldn’t be open yet.”

The worker described Lipkin’s window as a “safety hazard,” saying it was missing a piece called a limit stop that would have prevented the glass from opening more than a few inches.

“Three out of four windows in our room were missing the limit stop,” Lipkin said. “It was clear that they just hadn’t gotten around to doing this.”

In response to the safety concerns, Callow-Wright said some kinks are still being worked out.

“Even though there were and still are some items that are due to be completed, the building was ready for students to live there when we opened,” she said. “The reaction I have gotten from most residents is overwhelmingly positive, so I suspect that the people living there would agree.”

SCRH staff, according to residents, have been extremely responsive.

“Everyone I spoke to was extremely helpful,” said Lipkin. “They were shocked that this had happened and they did everything they could to fix the problem. I’m very thankful to them.”

One other sentiment concerning the SCRH stood out among students, including first-year Billy Morgan of Halperin House: “It needs a name.”

Michael Lipkin did not read or edit this article before its publication.