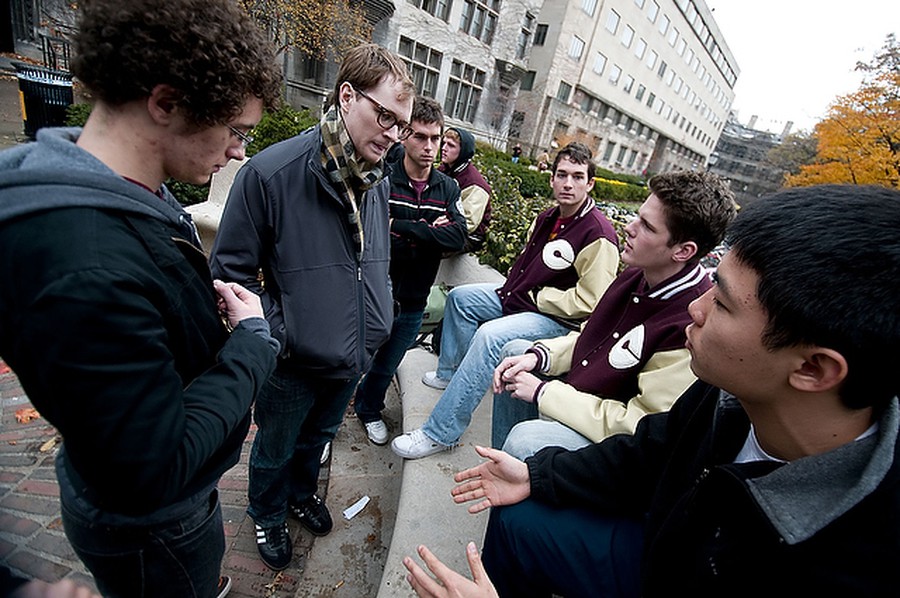 A crowd gathered in front of the C-Bench yesterday to see a showdown between athletes and smokers, but the event, which gained unwanted publicity after inflammatory e-mails attacked “smoking hipsters” last week, did not live up to the hype.

A handful of athletes sat at the C-Bench and chatted, ostensibly to raise awareness of the dangers of smoking for “the C-Bench initiative” undertaken by the Order of the C, a University organization composed of varsity male athletes.

Fourth-year Casey Lange said he came because he expected a “rumble.”

Instead, Lange watched a group of seven or eight smokers and athletes have “a reasonable discourse about the role athletes should play in the campus community and the different relations different cliques and sub-communities have with each other, and how these could be represented by an area, like the C-Bench.”

Deemed athletes-only in 1903, the C-Bench remained segregated until the 1960s. Since then, the bench has become a hot spot for students lingering—and smoking a cigarette—before and after class around Cobb.

While more people stood at the C-Bench between classes than on a normal Thursday, there was no clash of the cliques. Some smokers and athletes conversed, but the two groups generally kept to either side of the bench for the 20 minutes before the crowd dispersed.

E-mails last week discussing the event, called “TAKE BACK THE C BENCH [sic]” in the message, were sent over a sports team mailing list by Student Athletes Against Smoking (SAAS), a group claiming affiliation with the Order of the C.

“The C-Bench has become a haven for pretentious cigarette smoking hipsters and their star-crossed love affairs. Varsity athletes are rarely seen enjoying the C-Bench’s well-designed seating and atmosphere, meant to encourage healthy discussion and social engagement,” the e-mail said. “We can stay quiet no longer, we must stand up to reclaim our landmark! We demand an open gathering place for all those interest [sic]—not to be driven away by exclusionary smokers.” The message was obtained by the Chicago Weekly and posted in part on its blog.

Order of the C president and fourth-year Patrick Offner said SAAS was started as a practical joke by members of his organization after brainstorming publicity for an event about health awareness, and an e-mail describing a potential poster with a picture of “smoking hipsters” was sent out mistakenly as an authentic message.

Offner said the e-mail was a distraction from the group’s overall plans. “We made it clear that we shouldn’t go after any groups,” Offner said. “It does not speak for the Order of the C.”

Garrett Brinker, third-year and special events chair for the Order of the C, said, despite the disparaging poster, the event was intended “to create a bridge between non-athletes and the athletes.”

It was also part of an effort to increase the group’s campus presence. “The Order of the C’s entire organization and student athletes feel that their representation on campus has been slightly diminished on campus over the years,” Binker said.

Fourth-year Miles Hopgood, a smoker and a member of Tati Cycling, said the event provided an opportunity for two groups usually at odds to learn more about each other.

“A person who considers themself an athlete through and through...would look at a smoker and say, ‘Oh he’s judging me for being an athlete like I’m judging him,’” Hopgood said. “I think if we sat down and talked to each other we’d realize that we all have something in common.”