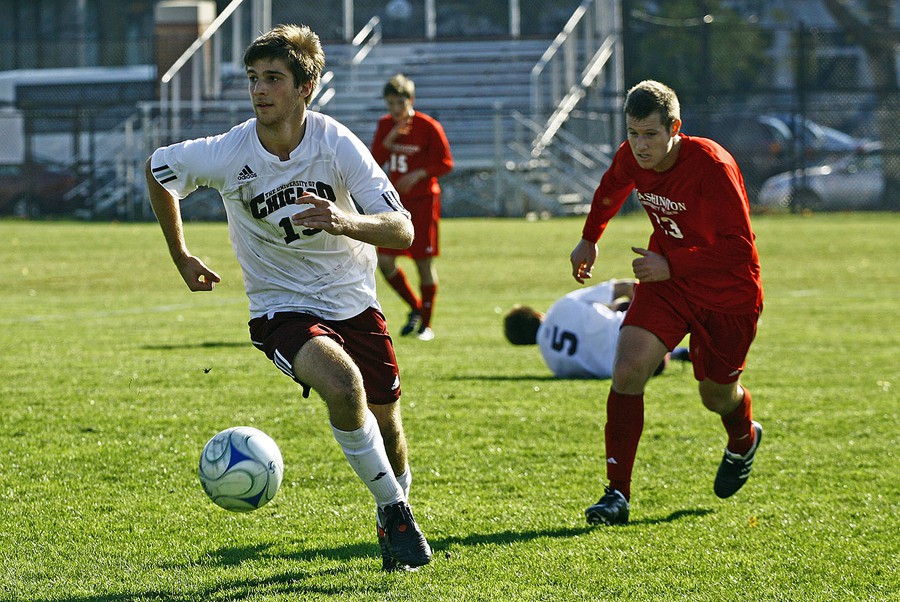 After Chicago (12–3–3, 5–1–1 UAA) and Wash U (9–7–3, 3–4) held each other scoreless in regulation, Coville fired in a penalty kick with one minute remaining in the first overtime period to earn a share of the UAA championship for the Maroons and clinch a berth in the D-III playoffs with a 1–0 victory over Wash U.

The win, coupled with ties by both Rochester (12–1–3, 5–1–1) and Carnegie (14–2–1, 5–1–1) in their Saturday games, put all three teams in a deadlock atop the UAA standings at 5–1–1 and secured a league co-championship for Chicago. Though all three teams were locks to be chosen for the tournament field, it was the Maroons that prevailed in the UAA’s tie breaking procedure to earn the conference’s automatic NCAA bid.

“We were very excited to get into the playoffs,” head coach Scott Wiercinski said. “The results that gave us the automatic bid were thrilling. It’s a nice, fresh feeling, and we’re really glad it was able to work out for us.”

Chicago will be matched up against Wartburg (15–4–1) on Friday at Wheaton, the host site for Chicago’s section of the bracket.

Coville’s shot put the Maroons in the playoffs for the first time since 2006 and gave Chicago its first UAA title since 2001.

“It was a cool moment, more for my team than for me personally,” Coville said. “Our team and especially our defense deserved that goal. It was great for the seniors…to confirm for them that this was not their last game.”

Coville ensured that the fourth years would not finish their Chicago careers against Wash U after fourth-year forward Edgar Friloux was taken down at the top of the box. Although the penalty was disputed by the Wash U fans and players, Coville felt that it was the right decision.

“Edgar played me a great ball in and made a great run in behind. I was lucky to get it to him, but Edgar worked really hard and got what we deserved in a [penalty kick],” Coville said.

This was not Coville’s first instance of late-game heroics this season. Against Rochester, he rifled in a goal with six seconds remaining in the first overtime period to win the game at the death.

“Wash U and Rochester are two teams we have not beat in a while, and to score against those two teams is something I am really happy to do for our team. They all deserve it,” Coville said.

Until Coville’s goal, the Maroons had little success mounting a strong offensive attack.

“We did a lot of standing around. We let a lot of balls bounce and we didn’t pass it very well,” Wiercinski said. “But we’ve talked about it all year; if we play hard, play for each other, and cover for each other’s mistakes, even when we don’t play well, we can still be in the game.”

What Chicago lacked in offensive success, they made up for with a stout defensive performance. The Maroon back line collaborated to smother the Wash U attackers as soon as they approached the domain of second-year goalkeeper Chris Giusto.

“Everyone on the defense is so close; we all just work so well together. We’re all friends on and off the field,” second-year defender Ryan Tunstall said.

Giusto extended his league shutout streak to six games and recorded his 11th clean sheet of the year, tying a school record and leading the UAA in shutouts on the season. He displayed his quick reflexes on one particularly impressive save off a corner in the first half that kept the game tied.

“The ball came in and [first-year midfielder] Garrett Laird lost his mark and [the Rochester forward] headed it on goal, but Chris made a really fantastic save,” Tunstall said.

Giusto and the rest of the Maroons will have a lot to prepare for as they face off against an unfamiliar foe in Wartburg.

“We know almost nothing about Wartburg. They’re not a team we typically play,” Wiercinski said. “We’ll be doing quite a bit of research this week to figure out what their style is and who their best players are so we can be really prepared when we play them.”

Chicago last faced off against Wartburg in the second round of the D-III playoffs in 2005, losing a thrilling 1–1 contest in penalty kicks. This year will be Wartburg’s seventh straight appearance in the NCAA tournament. Should the Maroons defeat the Knights, they will play the winner of the Wheaton (14–3–3) and Calvin (15–4–1) game on Saturday.