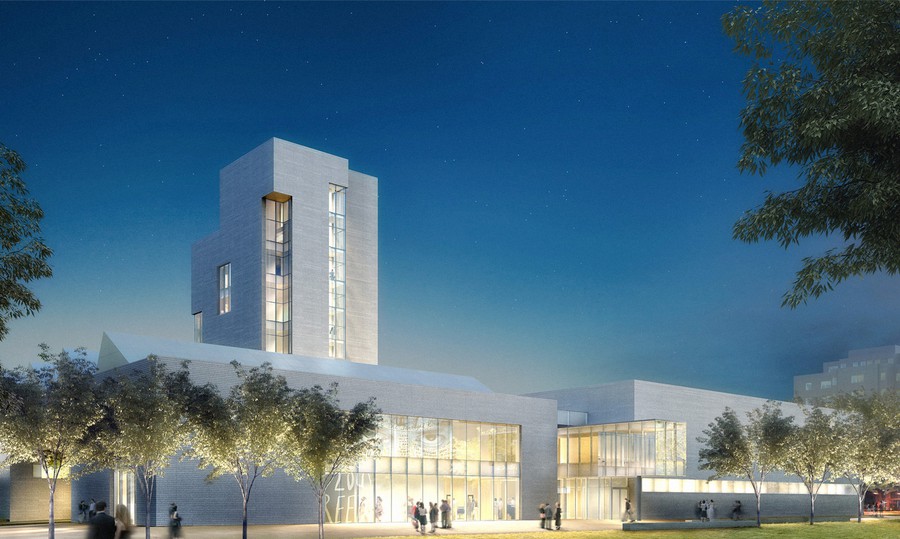 Architects presented final plans for the Logan Arts Center in a ceremony at the Law School Tuesday, featuring an 11-story tower and an adjacent building filled with performance and teaching spaces.

The Reva and David Logan Center for the Creative and Performing Arts is expected to cost $114 million and is scheduled to open March 26, 2012. Originally scheduled for completion in fall 2011, the date was pushed back earlier this year.

It will adjoin Midway Studios on 60th Street and Ingleside Avenue.

“This will be a beacon to draw people in from across the Midway,” architect Todd Williams said.

Williams and Billie Tsien, a married team of architects, have lived in the Carnegie Hall Tower in New York for many years. They said living in a structure devoted to music inspired their design for the Arts Center.

“We loved the tower of the arts. That was our big idea,” Williams said.

The main floor will have three performance spaces—a 450-seat auditorium, a 120-seat theater, and a black box theater—and a 2,000-square-foot exhibition space.

A performance space, which incoming Logan Arts Center Director Bill Michel called the performance “penthouse,” will occupy the top floor of the tower and seat a musical ensemble. To enhance acoustics, the penthouse will feature a 20-foot ceiling and hardwood floors.

Two outdoor spaces, a balcony, and a seminar room, will accompany the penthouse and offer views of downtown and Lake Michigan.

Studios, practice space, and set shops will fill up a large part of the remaining space in both of the buildings.

The set design workshops and arts workspaces will be painted white. “We left these spaces empty for creative students and teachers who want to make a great mess,” Williams said.

The buildings will have two small, cantilevered lookout spots on the edges and a café that sits under the outdoor bridge.

Tsien and Williams said their goal was to make all entrances equally inviting, including an open bridge that will connect the northern and southern entrances.

“The entrance is actually a plaza. You will feel like you enter as soon as you step off the street,” said Tsien.

Although Tsien and Williams’ design for the Arts Center was first picked in a 2007 contest, before the recession, they said it hasn’t significantly changed their plans. Because demand for construction is lower, contractors are forced to offer better deals for their services, they said.

The building should achieve a silver Leadership in Energy and Environmental Design certification; both buildings will have energy-efficient roofs and air-conditioning systems.

The architects said the building’s contemporary design was influenced by its neighbors.

“The area around it is varied in style,” Williams said. “We want to make a connection to the buildings across the Midway but were not beholden to a neo-Gothic style.”

The University had solicited faculty, staff, and student input on the Center’s design, and the architects said they felt that they had incorporated most of the requests.

“There was a lot of shuffling. At first we thought it was like putting together a deck of cards. It was more like making a sandwich,” Tsien said.