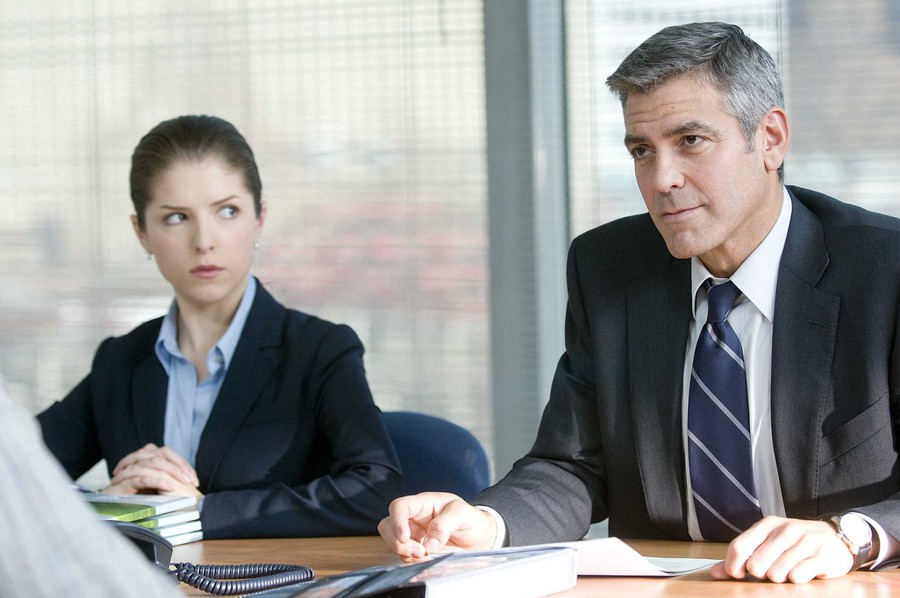 George Clooney probably doesn’t own a mirror. Why would the mega star, our modern-day answer to Cary Grant, need a mirror when he can easily find his image on most newsstands, all over the Internet, and on TV? In fact, I’ll wager he’s tired of looking at himself. Director Jason Reitman, however, clearly feels Clooney needs to spend more time giving a good, hard look at himself. Fancying he could provide Clooney with a mirror clearer and more forthcoming than any other the actor has ever peered at, Reitman decided to tailor the lead role of Up in the Air for the notorious, perpetual bachelor. And I doubt he will ever find a truer image of himself.

Up in the Air, based on a novel by Walter Kirn, taps into the theme of growing up much like Reitman’s previous film Juno, only its characters aren’t high schoolers. Instead they are, for all intents and purposes, adults who need to grow up. As Ryan Bingham, Clooney is a man living by the seat of his pants with little interest in settling down. Spending more than 300 days a year traveling around the world firing people for a living, Bingham has accumulated a wealth of frequent flier miles, VIP upgrades, and traveler’s perks, moving through airport security with muscle-memory finesse. His tiny apartment is furnished like a hotel room, and the only connections he bothers to make are between airport terminals. Prominent on the motivational speaker circuit, Bingham sermonizes to white collar businesspeople in hotel conference halls about the unnecessary weight of relationships—they’re heavy baggage that will slow you down. “We are sharks,” he says. We’re meant to keep moving, because if something stops us, we die.

However, Bingham is now threatened to be grounded by Natalie Keener (a revelatory performance from Twilight’s Anna Kendrick), a 23-year old hotshot fresh out of Cornell who proposes a revolutionary new approach to firing people that appeals to the corporate boss (a seedy Jason Bateman). Hoping to cut costs by essentially Skyping with employees to deliver the earth-shattering layoffs instead of flying out to meet with them in person, her impersonal approach effectively makes Donald Trump’s “You’re fired” technique seem positively kind. Charged with teaching her everything he knows, Ryan and Natalie set off together on a tour across recession-devastated America to provide her with field experience before the new process is implemented. During this time, Ryan meets his counterpart in Alex (Vera Farmiga), a fellow traveler of the business-class section packing a wallet full of the same VIP access cards Ryan carries. Ryan’s lone-wolf mindset evaporates with Alex, opening him up to the idea of having a “co-pilot” for the first time in his life.

For Reitman, adulthood is an existential crisis. What is an adult? When do we really grow up? Do we ever? Does it matter? “Grown up” is a term treated by this film with undeniable relativity. Does Ryan Bingham, or George Clooney for that matter, need to marry someone or have a large house? Would that make him a functioning adult in society? Is it Wrong with a capital W to have the lifestyle he does, or is he just fine as he is? Reitman takes extra time to explode the idea that age, careers, marriage, or parenthood are qualifiers for adulthood. He suggests it’s possible to make your own rules and follow your own drum beat.

Then you have Natalie from that generation raised to be adults by age 13. She’s got her plan and her list and her standards. We’ve been taught to know exactly what we want from life and to go get it, come hell or high water, because we’ve been drafting our life plan for years, and alterations to the plan were never part of the plan. Natalie looks young and unrealistically optimistic next to the seasoned likes of Clooney and Farmiga, who have a devil-may-care, “roll with it” attitude towards life. If they ever even had a plan, they threw it out long ago. Yet their laid back nature, which seems like something earned from seniority, in contrast to Natalie's youthful ambition, reveals itself in some ways as an immature rejection of responsibility.

Then again, there is a beauty to Reitman’s treatment of unconcerned freedom and lacking responsibility. In one blissful segment, Ryan, Alex, and Natalie crash a party thrown by AlphaTech, a company hosting a weekend business conference. They spend the evening cutting loose with AlphaTech employees, dancing to Young MC, impulsively cruising on a late-night boat ride, and returning in the wee hours to their hotel lobby, barefoot, drunk, and giggling. It’s a charming segment of recaptured innocence that is followed up with a hangover-like reminder of consequences.

Reitman never tells us what to think. But he offers all the angles to help us decide for ourselves. He’s simultaneously interested in nonconformity but mindful of responsibility. His characters float between adulthood and immaturity, possessed with acumen in one scene and fumbling about helplessly in others. His adults are better at handing out wisdom than actually living by it themselves.

Although Reitman is sympathetic to a misanthrope like Bingham, the story is ultimately about Bingham’s awakening to the satisfaction with life that comes from having a dance partner, a co-pilot and a fellow traveler, and having family to care about and who care about you. This air travel allegory and, as the film suggests, life itself, are really about the connections we make and, heartbreakingly, about the ones we don’t make.