Art paints sardonic portrait of friendships on the brink

The Steppenwolf's latest fosters compassion for the most unlikable characters and honestly questions the influence that art has over people. 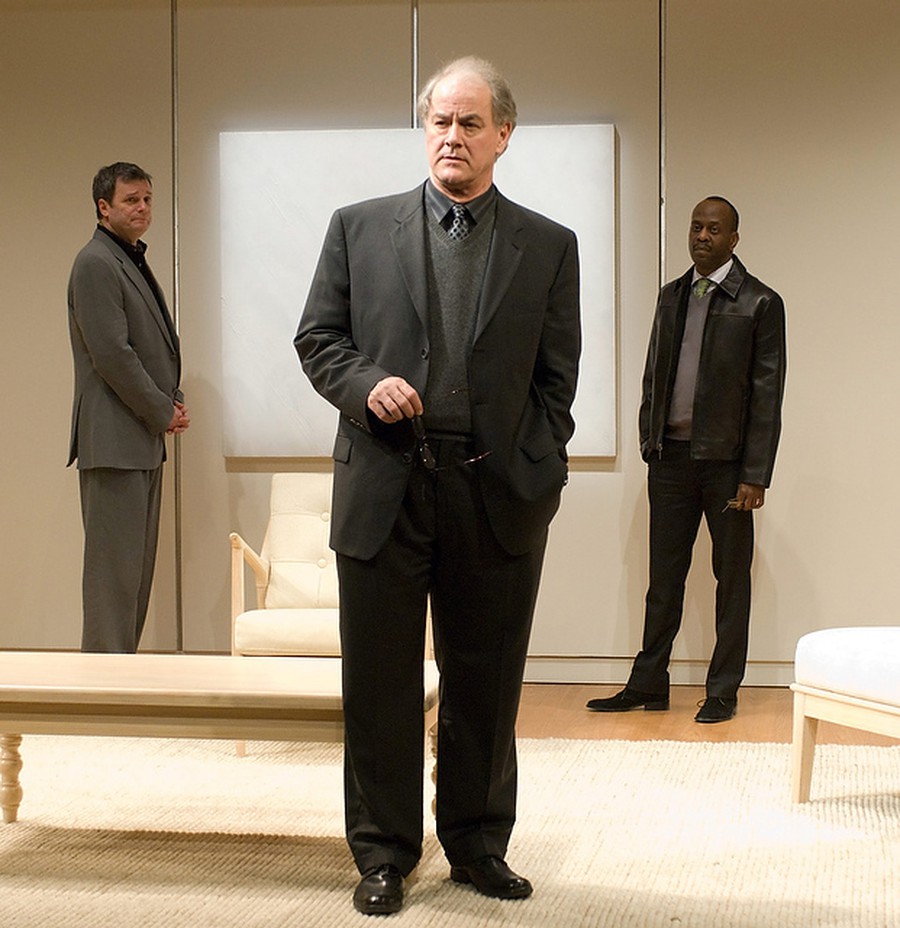 Armed with sharps wits and the extended dictionary of postmodern buzzwords, Steppenwolf engages the full force of artistic pretension in its production of Art. As the title might suggest, the clash of abstract ideals in high culture provides most of the conflict for the plot. The play’s journey through the aesthetic sensibilities of the self-centered bourgeois reveals hilarious hypocrisy and petty egoism in every relationship. But despite this superficiality that serves as the punch line for every joke, Art fosters compassion for the most unlikable characters and honestly questions the influence that art has over people.The central conflict is revealed at the very beginning of the play when Serge, a well-to-do dermatologist, tells his longtime friend and fellow art connoisseur, Marc, that he has just bought a new painting. But Marc is much less receptive when Serge proudly presents his first acquisition as a budding art collector. Displaying frank disappointment in Serge, Marc only becomes more incredulous when he discovers that Serge has paid 200,000 francs for this “trash.” The conflict escalates when Serge gets a second opinion from their mutual friend Yvan, who has much less conviction in artistic matters. Thus, Yvan is inevitably dragged into the middle of the bitter dispute that threatens to end their relationship. The instability of these relationships is apparent even before the argument fully develops. Marc’s disapproval of the painting is the first of many red flags that signal a collapsing friendship. The even deeper contempt the supposed friends feel for each other is revealed in asides. At first, the frequent lengthy asides fit poorly with the play’s fast-paced dialogue. The fourth wall isn’t broken, but the actors are regularly tapping on the one-way glass. However, the asides begin to flow with the argument when it becomes apparent that these characters are exactly the kind of egotistical people who would enjoy presenting such personal digressions. Appropriate considering their vanity, the asides indicate each character’s inability to overcome his preoccupations and extend a much-needed olive branch to his friends.As the argument progresses, it is clear that each character fights with his friends in order to avoid confronting his own inadequacies. Even though the painting is always a point of contention, the focus of the argument slowly shifts from artistic merits to the foundations of their friendship. The disagreement over the painting rarely rises above shallow proclamations. Serge is enamored with the new possibilities of modern art, while Marc believes such expressions have little worth beyond their shock value. But while the debate over art is arrested by banal regurgitation, the discussion of their friendship is far more revealing, especially when each is ready to admit his flaws. The characters struggle to determine whether or not their friendship is inexorably tied to their artistic beliefs, and whether such convictions are essential to their individuality or just childish opinions that they cling to like security blankets. The frequent and narcissistic displays of arrogance are also the source for most of the play’s comedy. However superficial they may be, Marc and Serge have quick, caustic wits that allow for clever turns of phrase and entertaining sarcasm. Yvan’s humorous moments emanate more from his neurotic idiosyncrasies. For the most part, the interplay between the characters is enjoyable and provokes both short chuckles and uproarious laughter. In this case the old axiom holds true: Comedy is all about the timing. While the character comedy turns slightly stale toward the end of the play, the sudden emergence of an old quirk in the middle of an argument injects new life into a dying joke. The beautiful set fulfills Steppenwolf’s reputation for innovation and fits the characters’ bourgeois backgrounds. With fashionable furniture against an off-white panorama, the set looks like a yuppie’s dream apartment. Thanks to the seamless set changes, each character’s apartment is sufficiently distinct, yet appropriately similar. The apartments’ homogeneous designs indicate the characters’ shared conformity. But the greatest success of the play is its ability to foster pity, and even compassion, for its dislikable characters. Serge and Marc are both too egotistical and unrelenting to win the audience’s support, and Yvan’s overabundant fatalism wards away most of the pity that might be felt for him. Nonetheless, one cannot help but root wholeheartedly for the survival of their friendship. A genuine feeling of affection and camaraderie slowly emerges from underneath all the sarcasm and the bitterness, even when the conflict seems completely irreconcilable. Art does not reduce itself to a choice between art and friendship, but the play does suggest that some of our firmest aesthetic beliefs can prevent us from truly appreciating the beauty in our lives.