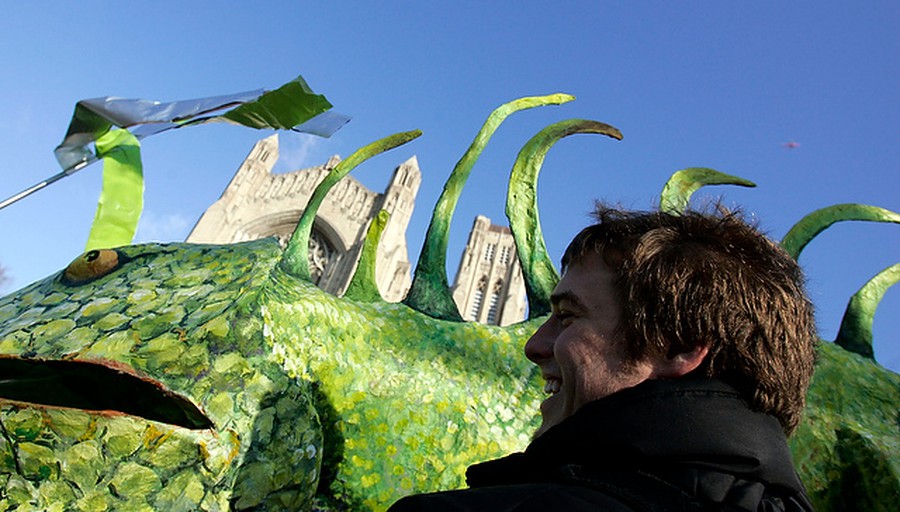 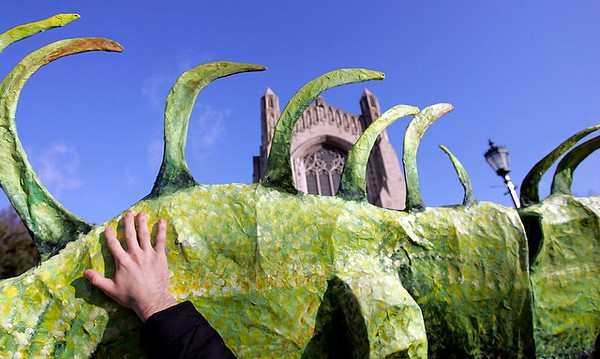 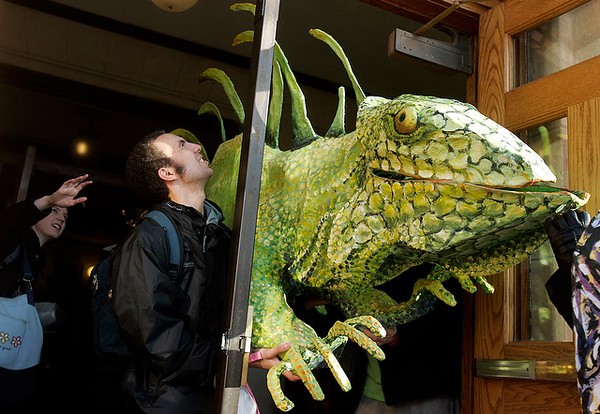 Chris Salata / The Chicago Maroon
Students entering the Biological Sciences Learning Center (BSLC) for an early morning class Thursday may have been surprised to find themselves in the company of a 15-foot iguana. The iguana, a common critter on the Galapagos Islands famously studied by Darwin, was part of a parade that began at 8:30 a.m. in front of the Lab School to honor Darwin's 200th birthday. The parade, which finished with a reception in the BSLC, was one of several events, including a poetry contest and week-long T-shirt sales celebrating the original theorist of natural selection.Phoenix Biology, the campus group that organized the celebration, had been planning since fall quarter. “As an organization, we needed to do something to celebrate this momentous occasion,” said Phoenix president and fourth-year Walter Adams.While a panel discussion on Darwin had been in the works for months, the parade was organized on fairly short notice, announced just last week by Jose Quintans, master of the biological sciences division. Quintans said he was inspired upon seeing the paper-mâche iguana at a performance by the Quad Club Revels and spoke with the artist about using it for the event. He was so endeared that he nicknamed the reptile “Juana La Iguana Con Mucha Gana.”Philip Matsikas, the creator of the iguana and a teacher at the Lab School, led the parade and was joined by Quintans in an alligator mask. Adams was also present, singing “Happy Birthday Darwin” on a megaphone while other members of Phoenix brought up the rear, holding Juana. “It was reminiscent of Godzilla,” Matsikas said. The decorations, logistics, megaphone, and music came together after of a week of heavy planning and “shameless promotion,” according to Adams. “We’ve each gotten between three and four hours of sleep a night,” he said. “Hundreds of emails,” Bailey added.

Phoenix plans to make the iguana parade an annual tradition in honor of Darwin’s birthday. “We want this to become a UChicago tradition, because it has a real UChicago feel to it,” Adams said.Matsikas agreed that the event fit in well with the University’s atmosphere. “Neogothic architecture is the perfect compliment to a giant papier-mâche lizard,” he said. Quintans is also excited for the iguana’s yearly appearance, though he harbors a few technical concerns for the future. “This is a tropical iguana,” Quintans said. “The iguana will become a tradition, but we will have to commission a weather-resistant iguana.”