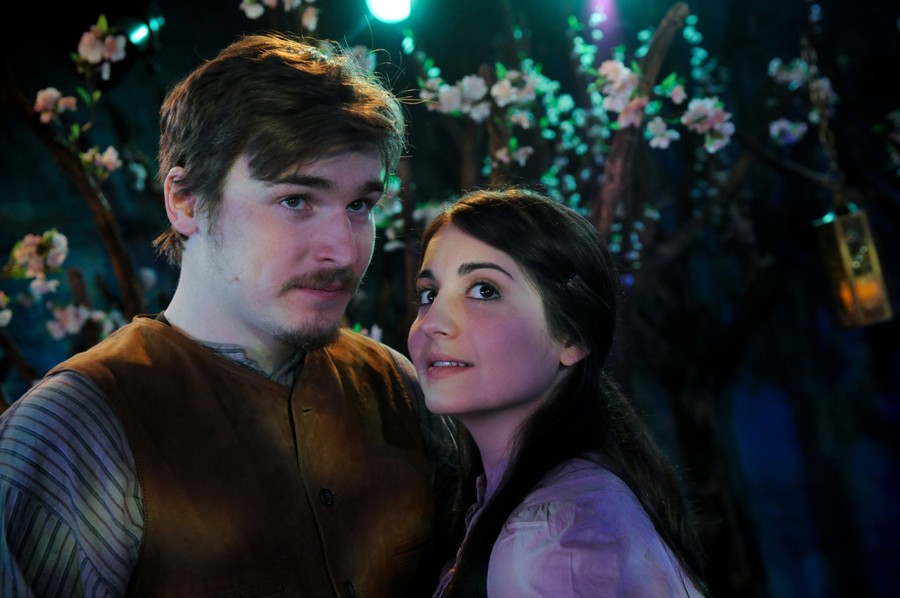 Modernity meets the madness of turn-of-the-century Russia in Strawdog Theatre Company’s production of Anton Chekhov’s Cherry Orchard. With a contemporary-sounding translation, beautiful set design, and an endearing and talented cast, the show presents a striking interpretation of a classic work without straying from the original text.

Cherry Orchard tells the story of the Gayev family, their servants, and their friends as they congregate for a final stay at their old house with a cherry orchard. The aristocratic family lost all of their money and is now finally losing their old estate. The play takes place on the estate and occurs over the course of a few months. However, from this single location, the characters’ memories span a larger expanse of time and space: they remember the way the house once was, the people who lived and died there, and their time abroad.

The stage design plays off this crossover between real and remembered scenes with the constant presence of the cherry orchard; the stage is filled with cherry trees in bloom, and furniture is moved around the trees for different scenes. This works beautifully, as each character’s dreams and memories incorporate the orchard. As the play’s title would suggest, the cherry orchard comes to symbolize many things for the different characters within the play. The production has a large cast and each character embodies a different social class. The aristocratic mother, the rising lower-class businessman, the intellectual student, and the ancient servant all see different things reflected in the orchard and frequently fail to understand what it means to those around them. “Cut it down?” says aristocratic Lovey to the businessman Lopakin, played by Jamie Vann, who explains to her how to turn a profit from the estate. “My dear man, you don’t understand a thing. If there’s a single thing of interest in this whole province, it’s our cherry orchard.”

The cast does a great job capturing Chehkov’s different characters and exploring the multitude of relationships they have with one another. The play lacks a lovable lead; each character’s failings hurt their loved ones and steer the direction of the play. The actors’ challenge was to present the emotions and vulnerability of each of the characters so the audience could empathize with them in spite of their faults.

This problem creating sympathetic characters comes from working with Chekhov’s difficult text. The dialogue between characters uses imagery, poetry and philosophy more often than natural speech. “I’m an educated man, I read books, but I cannot understand the direction I myself want to go—whether to live or to shoot myself, as it were,” says the bookkeeper Yepihodov, played by James Joesph, in the middle of a conversation about foreign travel. “So, in case, I always carry a revolver about with me. Here it is.” Speeches like this, featuring oddly personal anecdotes and non-sequiturs, make Chekhov’s style distinct and beautiful. However, the director and cast are confronted by awkward moments where a character’s dialogue simply does not seem realistic. These instances are tackled well for the most part, but occasionally the choice is made to play a line as if it were normal speech, and it doesn’t come off as convincing.

Strawdog’s translation of Chekhov’s text is unique and interesting in its own right. Cherry Orchard is very much rooted in early 20th-century Russian thought: The impact of the emancipation of the serfs, the role of the intelligentsia, and the position of Russia in the international world are all central to the play. But translator Curt Columbus’s use of modern colloquial language such as “hick,” “what’s up,” and “get the hell out,” and director Kimberly Senior’s artistic style, scrapping the Russian accents and including contemporary music in the intermission, combine to create a contemporary feel to the work. “When Chekhov sat down to write Cherry Orchard, I sincerely doubt he whipped out his quill and said, ‘Now I will write a dusty classic!’” wrote Senior in the director’s note. “Maybe the bridge that extends from provincial Russia in 1904 to Chicago in 2009 isn’t as crumbled as we might think.”