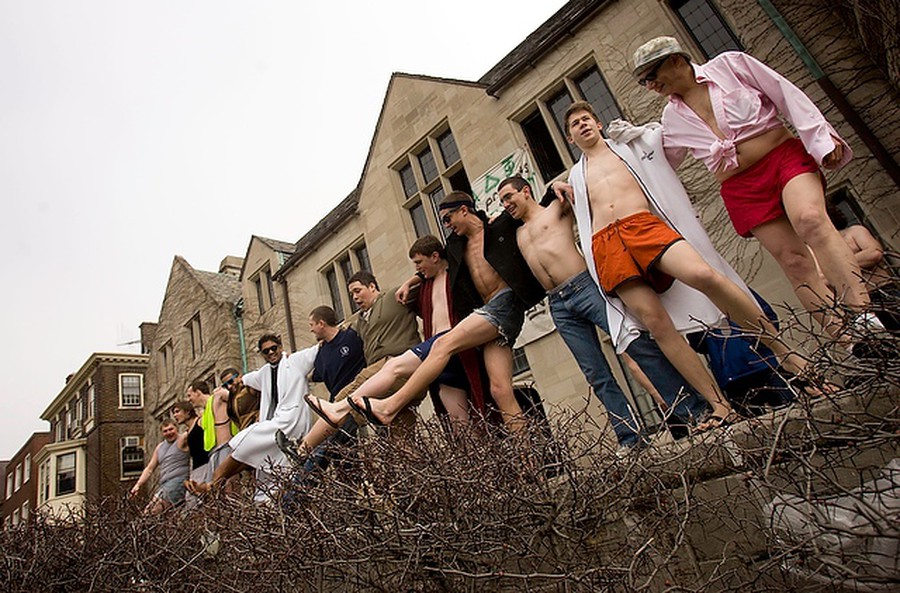 Alpha Delt Brothers held a counter-protest against Westboro in 2009. 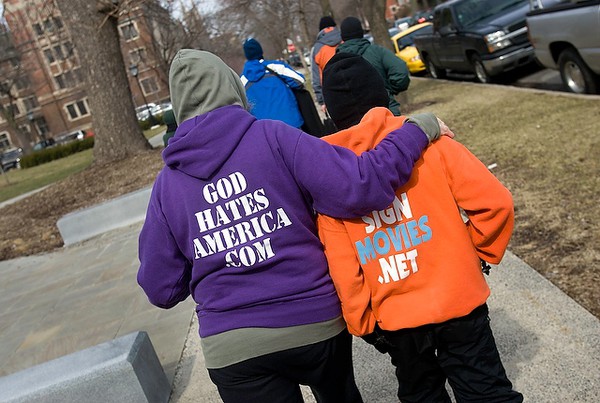 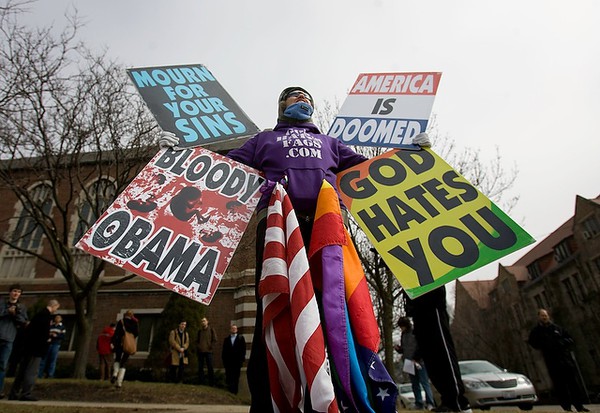 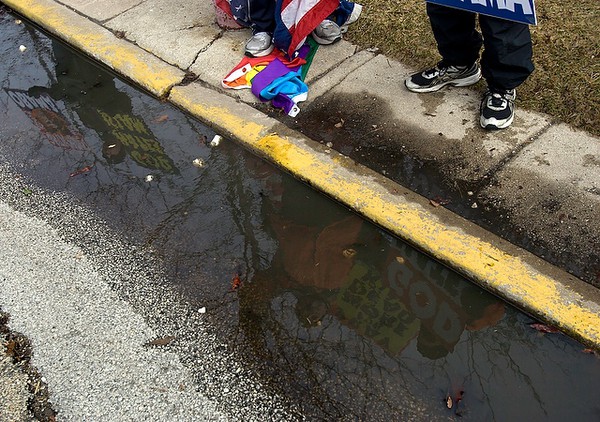 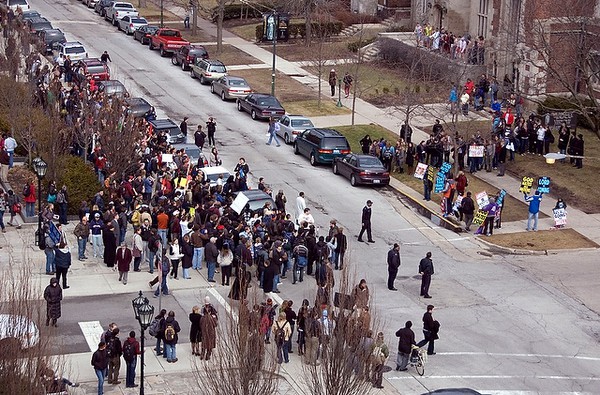 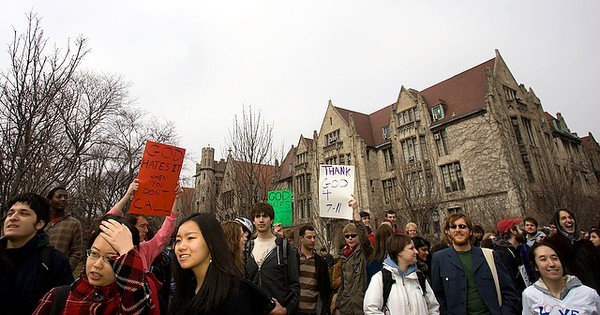 The WBC protesters arrived at the CTS at noon. Carrying signs reading “God hates the world” and “Bloody Obama,” they stood on the corner of East 58th Street and South University Avenue for half an hour. They allowed people to photograph them and held up their signs, smiling. At one point, Shirley Phelps-Roper, WBC’s spokeswoman, sang a joyful rendition of “God Hates America.”

They were accompanied down the street by a group of students mocking the WBC’s message. The students held a sign reading “Figs Doom Nations” and planted themselves across the street from the WBC, drawing from a Biblical passage in which Jesus disparages a fig tree. “If you need scanty biblical evidence for anything, we’ve got it,” said fourth-year Carmel Levy as he handed out flyers containing biblical citations that read: “Jesus rebuked the fig as an evil abomination” and “God Promises Terrible Vengeance Upon Any Fig-Loving Nation.”

“We just wanted the world to know that God’s vengeance doesn’t just fall on the gay, but also on the fruit,” said fourth-year Max Shron.

Across the street, the Alpha Delta Phi fraternity brothers lined their porch in bathrobes, awaiting the arrival of the protesters. When they appeared, the brothers stripped off their robes and began dancing to Diana Ross & The Supremes’ “I’m Coming Out,” Elton John’s “Tiny Dancer,” and the Weather Girls’ “It’s Raining Men.” The “Tiny Dancer” lyrics “Jesus freaks/out in the streets” elicited a loud cheer from the crowd on the other side of the street.

“When we got down to the Seminary Co-Op and Alpha Delt was dancing around in their underwear, me and Rabbi Ruthie [Gelfarb] and this priest started dancing and we got like 30 people to come over and dance in front,” said third-year Iah Pillsbury. “It was like a celebration. It was really cool to see so many people come out in support of diversity and doing whatever we want and gay people...and religious freedom.”

The party atmosphere continued in Hutchinson Courtyard, where Queers and Associates, as well as other students, had organized a party in celebration of diversity. Counter-protest leaders encouraged students to gather at Hutch, containing the breadth of the counter-protest in order to discourage WBC media attention.

”There were a lot of various ideas about how to respond,” said third-year Dave Klein. “There had to be a response because a lot of people were mobilizing around the issue. We came up with this idea of having a party, to turn it into something beautiful...a celebration of diversity.”

“We took the opportunity...to show the University and beyond that we’re proud of who we are,” said first-year Lexie Tabachnick, who also helped coordinate the party.

The party included a s’mores roasting station, hot chocolate, a dance performance by Rhythmic Bodies in Motion, and musical performances by individual students and the a capella group Men in Drag. There were also petitions to be signed in support of overturning Proposition 8, a California ballot initiative making gay marriage unconstitutional, which was passed in November and is now being debated in the California Supreme Court.

Large banners with slogans such as “Many Identities, One Community” were available for students to sign. Klein said the banners were there so that people could express “more positive messages about who we are. We are a diverse campus and we love us.”

The party also raised over $500 for the Broadway Youth Center, which provides health services for the LGBTQ community.

Alice Hunt, president of CTS, echoed her student’s sentiments. “I think it’s sad, this kind of expression of anger and hostility,” said CTS President Alice Hunt. “I’m not sure it has a viable place in our society, so I’m sad that it’s happening.”

She added that while CTS didn’t plan any response, she was enthused about students’ reactions. “We’re so pleased and overjoyed by the good-spirited energy with which they were living their lives today,” she said.

WBC protesters moved to the Midway to protest the Law School at around 1:00 p.m. Far from being fazed by what they had encountered in the quads, they were delighted. “I truly and dearly love it,” said Shirley Phelps-Roper, the group’s spokeswoman. “It is so awesome when you juxtapose this little group of servants of God with this restless mob of humanity.”

She added: “These people think that they have the power, this arrogant nation, to change God. The little girly boys up there with their clothes half off gyrating around—they might as well flip off their god.”

Deputy Dean of Students for Student Affairs Martina Munsters came away with a positive impression of the counter-protest.

“From what I’m hearing, it sounds like things went really well. There was no confrontation...[and] students seemed to be pretty upbeat,” she said. “They even raised about $500 for charity, which I think is tremendous.”

Westboro Church to Picket on Campus Next Friday

By Pete Grieve and Adam Thorp