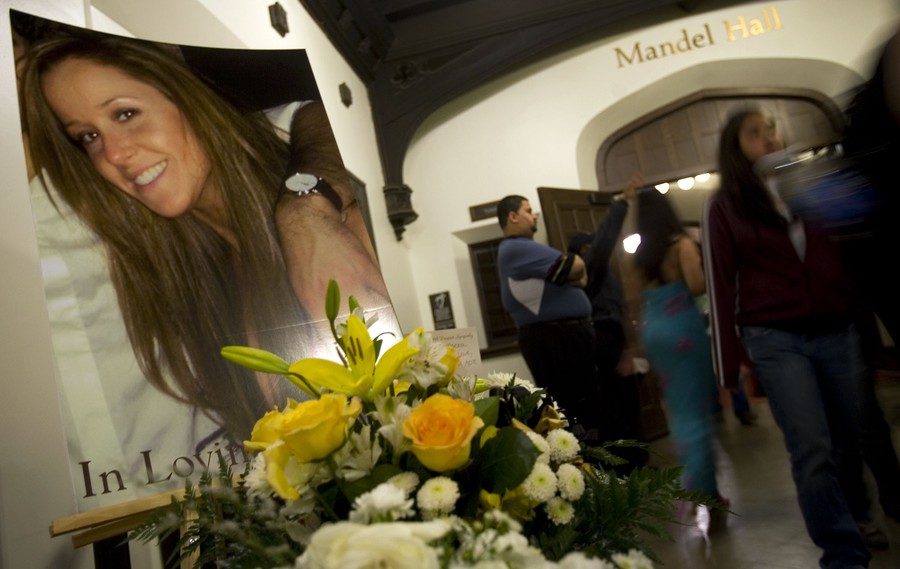 A line that stretched out of the Reynolds Club was greeted by a large poster of a smiling Stanger, with "In loving memory" printed underneath. Bouquets of flowers covered a table in front of the poster, one sent by campus sororities Alpha Omicron Pi and Delta Gamma, and the other by fraternity Alpha Epsilon Pi.

Inside Mandel Hall was a large blank poster labeled "DEAR EMMA." Markers were available for all who wished to leave a message. The evening's program explained: "Mr. University 2009 007 license to thrill is dedicated to Emma Stanger on behalf of her sisters in Kappa Alpha Theta. Forever in our hearts. Forever our sister. Theta love forever."

The show began with a slow clap from the audience, loud cheering, the James Bond theme and then a request for tasteful, appropriate behavior. A Theta sister took the stage to inform the audience: "We'd like to dedicate this show tonight to Emma Stanger. Please keep her in your thoughts and prayers."

A slideshow of pictures played, showing Stanger with her family, dressed up for prom in a sparkling white dress and making faces with her friends. Second-year Claudie Rubin paid tribute with the jazz classic, "I'll be seeing you."

The pageant began with Theta sisters, dressed in black shorts and Ugg boots to commemorate Stanger's trademark style, dancing onto the stage with the Mr. University candidates in their wake. They performed a dance routine to Madonna's "Die Another Day" from the album American Life, featured in the 2002 James Bond film of the same title. The event raised money for Theta's national philanthropy, Court Appointed Special Advocates, an organization that advocates for abused children.

The pageant also had its lighter moments, featuring a swimwear competition, a talent contest, and an evening-wear competition. During the swimwear competition, Mr. Fiji, third-year Ryan Verissimo, spiked a beach ball to his brothers in the balcony, stripped to a bathing suit and handed roses to all the judges. Mr. Soccer, fourth-year Brent Vale, scraped one of his whipped cream bikini straps off with a Nilla Wafer from the box he was carrying, and then, during the talent competition, channeled Beyoncé, executing the entire dance from her music video "Single Ladies," with the video playing behind. Mr. Student Government, second-year and vice-president for administration Julian Quintanilla serenaded a rubber duck with the Sesame Street classic "Rubber Ducky."

But it was Mr. Swimming, second-year Yeonjean Gahng, whose dance for the talent competition won loud cheers from the crowd and the Mr. University crown from the judges. This is Gang's second Mr. University title. Vale was awarded first runner up, and Verissimo was awarded Mr. Talent.

Theta President and third-year Liz Sugden took the stage to tender the sorority's thanks to, among others, the University for its support for event planning and the Kappa Alpha Theta chapters from Lake Forest and Northwestern for coming to the event.

She added: "Emma, we will always love you. We will always remember you. Thank you for your life, your laughter and your love."

Second-year Kimberly Trocha, who organized the event said she was pleased with how the show had turned out. "I think it was more than what we expected and everyone did such a good job. The contestants were phenomenal and all the girls were great," she said after the event.

"It was really in memory of Emma and I think that's why it was so great. It was like she was watching," she said.