Student composers to get world-class debut at Mandel Hall tonight 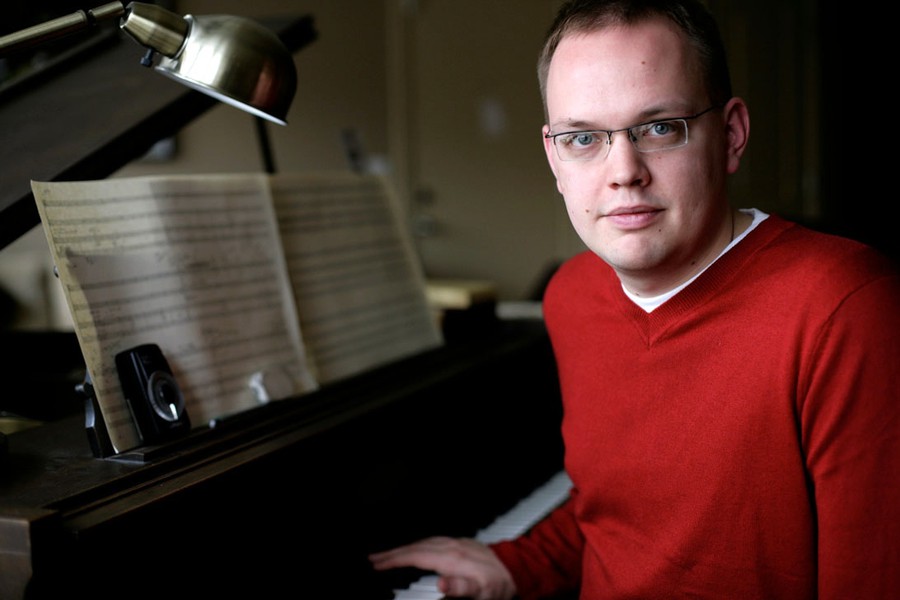 Since its first three-year residency at the University of Chicago began in 2005, the Saint Paul Chamber Orchestra has held a number of informal reading sessions of works composed by students in the Music Department. But this year, the first year of its second residency, the orchestra held a competition to determine which student works would be performed in one of its public performances at Mandel Hall. I had the chance to talk to the two winning composers, Alex J. Berezowsky and Jacob Bancks, both University of Chicago graduate students. Berezowsky’s two-minute piece is called Celestial Dance; Bancks’s 11-minute work is called Ruach.

Chicago Maroon: What does winning this contest do for you?

Alex Berezowsky: As soon as you mention that your work is being played by the Saint Paul Chamber Orchestra, people pay attention.

CM: Can you tell us a bit about your pieces—the inspiration, the themes?

JB: There are two static musical images. First thing you hear is a violin solo. There’s a source of action—an active thing. Then there’s an inactive thing, which the active thing infuses. “Ruach” in Hebrew means “breath,” “wind,” or “spirit.” I make my own landscapes. I began composing by imagining two stark landscapes: one formless and dark, the second dry and deserted—with sparse woodwinds, radioactive strings, and a soaring horn solo.

AB: I came about this in an odd way. I had a piece read last February called Constellations. I was told I could do another piece. Since I was very busy during the summer getting married, I decide I’m only going to write a short piece. I got back to school, and I heard about Asher [Goldman, an undergraduate at the University, who passed away on September 8, 2008]. I had lunch with him a couple days before at Ex-Libris. One thing I liked about him was his perverse sense of humor—like strange, crazy computer parts and 12-bar blues. That broke the gridlock I was experiencing. I looked to how other composers dealt with the problem of writing really short orchestral pieces. I drew a lot of inspiration from a piece by [Edgard] Varèse. I took chords and sounds from Constellations and mapped them onto rhythms, forms, and structures inspired by Varèse.

CM: What should people listen for in your pieces, particularly if they don’t have a music composition background?

JB: Listen for action and inaction. Lines that move and have life in them and lines that need life. It’s clear to me; hopefully it’s clear to the listeners. I had thought one piece I wrote was very straightforward, and yet some people were baffled and perplexed. This time I tried to be as straightforward as possible.

AB: I do tend to write short pieces, or long ones with rapid mood changes. I identify with the rapid pacing of television.

JB: If you listen to a Tom and Jerry cartoon, it’s amazing when you realize how they did that before there were computers to sync things up.

AB: Listeners may be disappointed if they’re expecting cosmic answers because of the name [Celestial Dance]. Instead, think of a party, where the cheese platter goes around. It’s a strong cheese. Not everyone wants a whole plate, but one [taste] is really good.

CM: Do you “visualize” while composing or listening?

JB: Writing for orchestra is a very three-dimensional activity. There’s foreground and background inherent in the orchestra. I think of the depth of the panorama. There are so many possibilities; you always have to think in 3-D.

AB: Definitely you have to be aware of the spatial characteristics when you write the piece. I’m inspired by natural phenomena. It’s important to have a wide variety of density. There are a few stars in the sky, but a lot of black. I’ll alternate a quieter, less busy, thinner texture with the overwhelming volume of really loud orchestral tuttis. It’s like in grunge music where you get the quiet bits and the wall of guitars.

CM: Jake, why pick a Hebrew word [for “breath”] for your title?

JB: I’m not Jewish but I spoke with a rabbi about it. She explained the multiple meanings of ruach, what it’s meant throughout history.

AB: For eighth blackbird, I composed a piece called Albion, which is the name for Great Britain, an astronomical clock in the 14th or 13th century, and a street I grew up on. I’m very interested in origins of words, layers of meaning. I would hope that there is a metaphysical or spiritual layer of meaning.

CM: Is your work informed by art?

JB: My work is mostly informed by poetry, literature. The history of ideas. A painting of Picasso I love is “Violin and Guitar.” It’s a fantastic mishmash of elements—the familiar element of the f-hole of a violin surrounded by unfamiliar elements.

AB: I don’t usually give titles to my pieces until they’re done. I’ll get a sense of what I’ll call it when I’m most of the way done. My biggest inspiration is respect for the composers that preceded me. A lot of my work was born out of thoughts like, “If Varèse and Stockhausen had a bizarre love child, what kind of music would come out of it?” In this case, the offspring would come from Varèse and my former piece Constellations. Hence, Celestial Dance.

AB: Yep, good ol’ Karlheinz. He’s on Sgt. Pepper’s album cover you know! Part of why I compose is to make more of pieces, which I think should be out there.

CM: Any advice for aspiring composers?

AB: The more you write, the better you get.

JB: Write lots of music. It’s easy to spend a lot of time thinking about it.

JB: If you’re going to get in, get in it for the long haul. Six or seven years ago I had thought I needed to make my orchestral piece awesome. It was terrible. Only after writing 10 or so orchestral pieces was I able to get that out of my system. You want something sustainable—the life of an artist.