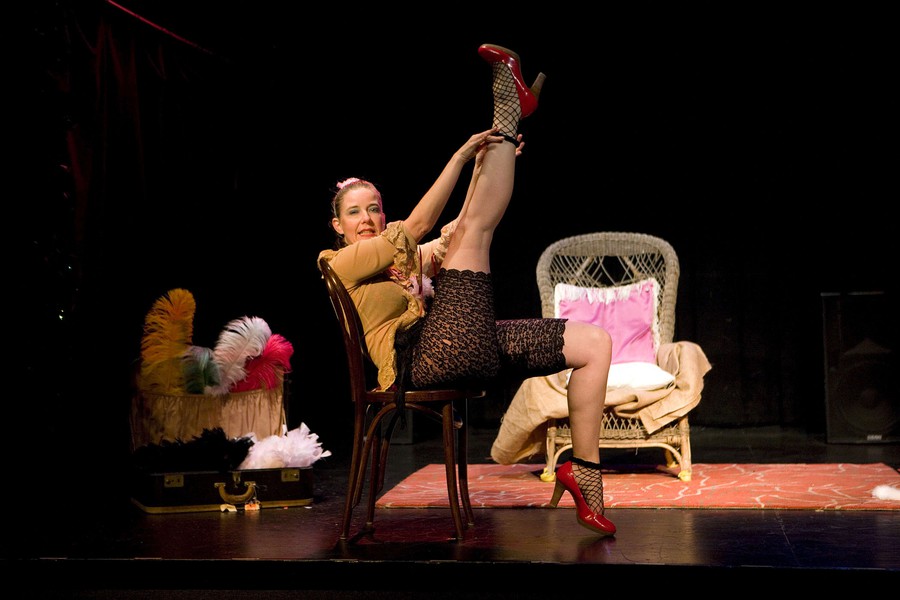 If the premise of Steppenwolf Theatre’s one-night only performance, The Last Days of Desmond “Nani” Reese: A Stripper’s History of the World, sounds like an episode of Jerry Springer entitled “My Great Grandmother Was a Stripper, and Now I Want to Be One Too!” don’t let that throw you. Heather Woodbury’s wonderfully written and performed solo piece is pure comedic genius.

Reese opened in 2007 in L.A. to rave reviews and has been touring the country ever since. Woodbury is an award-winning playwright and actress who wrote the show and portrays both a former stripper and doctoral candidate in this entertaining and thoughtful one-woman extravaganza. Set in the year 2014, the play tells the story of Harvard Ph.D. candidate Amber, a self proclaimed “ethno-feminist-dance anthropologist” and her desperate attempt to finish her extremely convoluted 10,000-page dissertation titled “The History of the World, As Told by Loose Women.” Filling her voice recorder with intellectual jargon, Amber travels through ecologically devastated Los Angeles in search of the missing key to her dissertation: an interview with the infamous 108-year-old burlesque queen, Desmond Reese. Reese, isolated from the rest of desolate Los Angeles, lives atop a hill with 27 cats.

Dressed in hot red pumps, a revealing top, and a furry pink scrunchy, Woodbury flawlessly transitions from a distressed doctoral candidate to the crass, paranoid, and outrageous character of Desmond “Nani” Reese. With only a chair and a suitcase, Woodbury relies solely on her acting chops to take the audience on a journey through Desmond’s lascivious history as a prostitute, burlesque headliner, and wife. Each decade reveals another shocking chapter of Desmond’s life and a lesson on seducing the male sex. (She suggests that it’s all about moving in slow circles.)

As the interview goes on, it becomes obvious that there is far more to the loud-mouthed cat lover than meets the eye. Woodbury takes audiences back in time to show how a younger Desmond resisted, or outright ignored, societal pressures that often trapped women during the ’30s and ’40s. Whether her rebellious life choices were guided by desire for monetary gain or sexual expression remains an open question.

To lighten the rather somber subject of women’s social roles during the 20th century, Woodbury injects her performance with hilarious moments that make it wildly entertaining. Reese’s coarse southern accent and curious vocabulary provide some very funny moments. Her huge arsenal of names for her vagina is hilarious; some cannot be mentioned in this article, but others, such as “hoochy cooch,” are more endearing.

Of course, a play about a famous burlesque performer would not be complete without a striptease. In the beginning of the second act, Woodbury shocks the audience by slowly removing her clothing as a younger version of Desmond. Her vivacious strip show culminates with a cue from the burlesque music and Woodbury’s removing two different bras to expose strategically placed bright silver pasties.

Aside from this Janet Jackson–like exposure, the second act of the play really emphasizes the themes of the show. Desmond’s long history as a showgirl reveals the universal struggle with aging. Her travels around the country as a burlesque headliner long over, she is reduced to a spinster reminiscing about her former beauty.

Amber’s frustration with her impossible thesis also brings out the problems of studying a subject rather than living your own life. After realizing that Desmond’s story has not contributed to her dissertation at all, she takes a page out of Desmond’s book and drunkenly lives like a hooker for a night. Ultimately, Amber discovers Desmond’s feminist secret—that sexual liberation unites women throughout history.

The Last Days of Desmond “Nani” Reese: A Stripper’s History of the World shows that strippers are much more important to society than we think. Sure, they have their role as eye candy for recently fired bankers and fodder for Mr. Springer’s television program, but Woodbury demonstrates that the founders of burlesque were also revolutionaries who paved the way for women who defy social norms. Desmond “Nani” Reese may be deranged, daft, and decrepit, but with her secret to seduction and famous “hoochy cooch” she can lay claim to helping start a revolution that would forever change how women are treated throughout the world.