Director Tina Landau, a member of the Steppenwolf ensemble, gives us an immensely watchable iteration of the 400-year-old Shakespeare comedy. 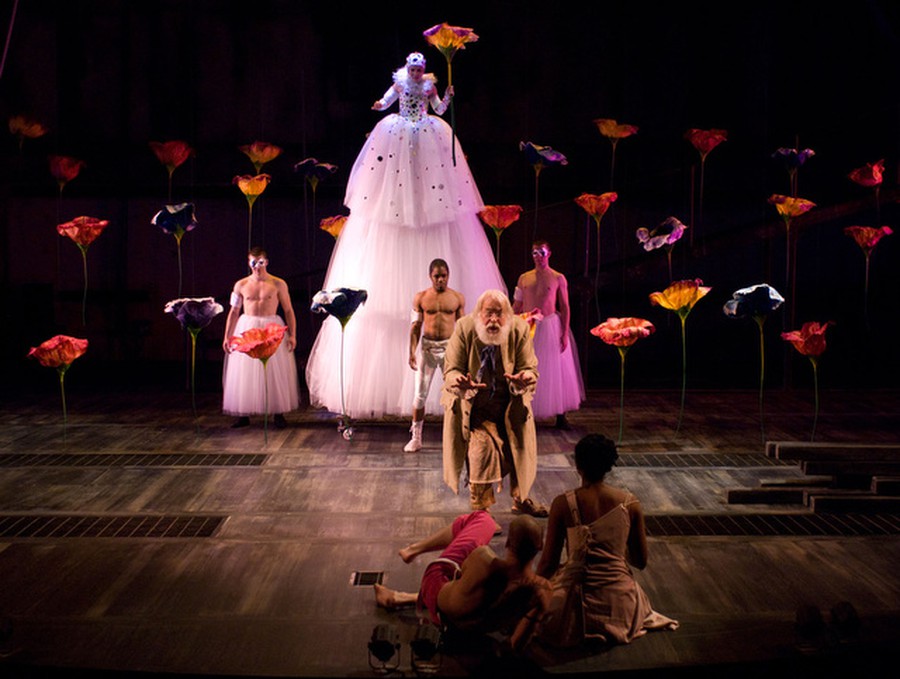 Oddly enough, Steppenwolf Theatre has never produced a single Shakespeare play in its celebrated 33-year history. Until now, that is. Steppenwolf takes its first shot at The Bard in its production of The Tempest. And make no mistake; this is not your dad’s Tempest.

Widely acknowledged as Shakespeare’s last play, The Tempest was written in 1610, three years after the English settlement of Jamestown. Its plotline reflects the seafaring nature of these settlement expeditions. As the play opens, King Alonso and his entourage, including his son Fernando; his brother Sebastian; Antonio, Duke of Milan; and Gonzalo, Alonso’s kindhearted councilor; set sail from Tunis to Italy after the wedding of Alonso’s daughter. Suddenly, they find themselves in the middle of one hell of a storm. Their boat ripped in two, the party lands on a deserted island that isn’t quite so deserted. It eventually becomes clear that the storm was no freak of nature, but the handiwork of one of the island’s inhabitants, Prospero.

Twelve years before, Prospero, rightful Duke of Milan, scholar, and self-trained sorcerer, was banished to sea with his daughter, Miranda (Alana Arenas), on a boat so rotten that the rats abandoned ship. Preoccupied with his books, Prospero had let control of his estate go to his scheming brother, Antonio, who partnered with Alonso and Sebastian to steal the dukedom for himself.

But before Prospero set to sea, the kindly Gonzalo snuck him his most beloved books and some rations. Prospero and his daughter landed on the island. Once the home of the witch Sycorax, the island is inhabited by a number of spirits, including Ariel, a benevolent sprite freed from the dead witch’s curse by Prospero. And, of course, there is Caliban, spawn of the dead witch and a devil, played to a slinking, slimy perfection by K. Todd Freeman. Freeman’s way of writhing and shrieking across the stage reminds the viewer that Caliban was Gollum before Gollum was Gollum. Prospero rules the island with his magic, imprisoning and torturing Caliban and enslaving Ariel to do his bidding when the Italy-bound party crashlands on the island.

Director Tina Landau, a member of the Steppenwolf ensemble, gives us an immensely watchable iteration of the 400-year-old work. Embracing song, dance, and technology, her interpretation is artfully grounded in modernity as much as in tradition. Consider that Ariel (an effervescent Jon Michael Hill) conjures the island’s ethereal music not from a wand, but with a Macbook.

Landau imagines an island bare and stark, translated beautifully by scenic designer Takeshi Kata. Landau’s and Kata’s island is modern, minimalist, and industrial. Relying on the bare backdrop of the concrete Steppenwolf stage, the set is punctuated by welded ramps, steel booms, and wires off of which actors rappel across the theater. Dovetailing perfectly with the scenic design is the music by Josh Schmidt. Running the gamut from odd New Orleans dirge (Caliban’s song) to fantastical techno-funk, Schmidt’s music is a refreshing compliment to Landau’s pleasantly bizarre, futuristic conception of the work. After all, what works better than techno-funk when your spirits are costumed in red latex? And speaking of red latex, the imagery is intense and beautifully done. Shakespeare’s script calls for Prospero to whip up visions for certain characters, gorgeous or eerie according to the feeling of the scene. These colorful and strange phantasms are a highlight in this very original work.

The entire ensemble is strong, but Frank Galati shines as the banished Prospero. An imposing figure on the stage, his Prospero is gravitas embodied. His rage is palpable, but his love, dignity, and compassion evince a man powerful yet profoundly human. Also excellent is Lois Smith in the role of the honest Gonzalo. Landau’s priority was to cast Steppenwolf ensemble members over outside actors to give the production a cohesive feel, which explains why Smith, a woman, is portraying a role written for a man. But Smith is a perfect choice. Her performance does justice to the goodness of her character, whose virtue often touches the viewer. A final highlight is Yasen Peyankov’s portrayal of Stephano, Alonso’s ridiculous drunk butler. Stephano has the good luck to land on the island with a barrel of liquor. Peyankov is a hilarious Stephano, carrying around a makeshift flask made of tree bark, bidding those whom he meets to “kiss the book” and drink deep of his cup.

This season, Steppenwolf’s theme is the imagination. As Steppenwolf forays into the realm of islands, spirits, sorcerers, and ultimately, the capacity for human goodness, it gives us a rendition of The Tempest that is not only refreshingly original and meticulously well-done, but also deeply imaginative.