Babes with Blades, the world’s only all-female stage combat theater troupe, manages to offer audiences a distinctive rendition of Macbeth simply by performing it in its original style—yet casting the battle-rich play solely with women. 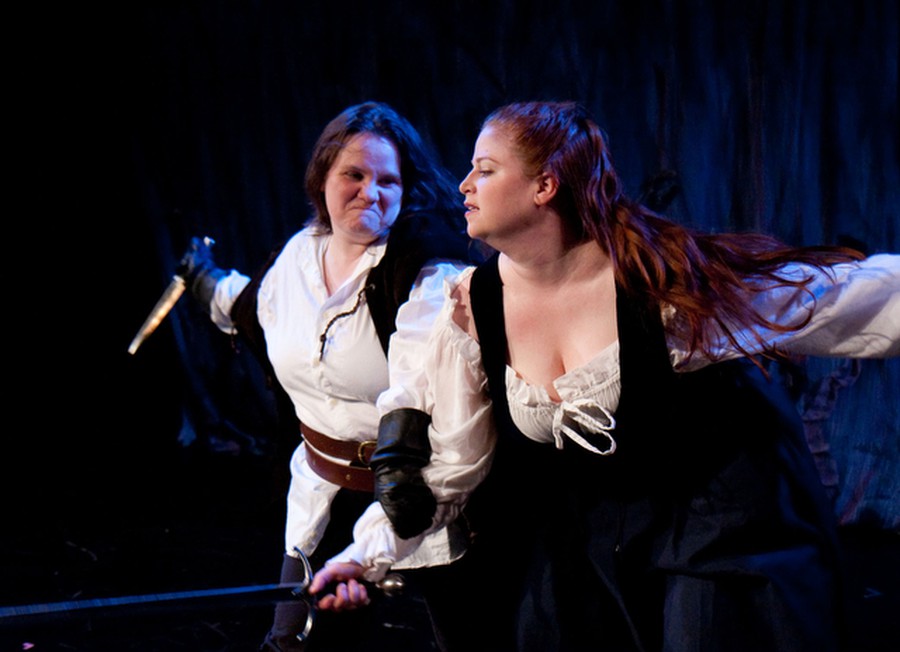 Shakespeare’s Macbeth is timeless, but productions of it are so common that it seems that no one stages the tragedy anymore without some highly stylized reworking. A couple of recent Chicago shows, for example, upped the gore and chose modern costuming. But Babes with Blades, the world’s only all-female stage combat theater troupe, manages to offer audiences a distinctive rendition of Macbeth simply by performing it in its original style—yet casting the battle-rich play solely with women.

Babes with Blades’ primary mission is to create opportunities for women to practice the performance art of stage combat—not acting—and at times during their production, it shows. Some of the actors playing lesser roles appear amateurish; in fact, the young Macduff and one of the younger noblemen hail from the Viola Project, Chicago’s all-women Shakespeare workshop company, and are complete amateurs. But despite such limited resources, this imagining of Macbeth possesses some worthy qualities, including its generous use of talented swordplay. Soldiers dash in and out of the aisles in the small La Costa Theater, dying in battle after no small struggle. Choreographer Libby Beyreis’s fighting sequences combine the actors’ impressive physicality with attention to in-fight detail, creating moments that are engaging and believable.

Compared to some of Shakespeare’s other plays, Macbeth already pushes the boundaries of women’s roles with the ambitious Lady Macbeth. Director Kevin Heckman’s production takes this idea a bit further by revising the role of Lady Macduff, who in the original runs away crying after Macbeth’s hires kill her son, but this time grabs a sword and manages to fight off a couple of the assassins before she’s stopped. Lady Macbeth, played energetically and sympathetically by Nika Ericson, is not a madwoman in a world of men. She’s likeable, and even bubbly, as she plots the murder of a somewhat motherly Duncan. The attraction between Ericson and Kathrynne Wolf’s Macbeth is honest and, though expressed best in only a few romantic moments, palpable throughout the play.

The witches in this production are ever present and, indeed, weird, if that word is used anymore to talk about anything else that elicits a strong sense of dread. From the opening scene, when they appear crawling amongst bodies left behind after battle, it’s apparent that the weird sisters are very active characters in this story. They speak along with Lady Macbeth as she reads the letter informing her that her husband has become Thane of Cawdor, and offer Macbeth a dagger as he paces during that infamous nighttime scene. Heckman’s notion that the witches are responsible for the majority of the events in the story is made obvious by the red paint that the witches carry to mark spots on the foreheads first of Lady Macbeth and then Macbeth himself. They paint Lady Macbeth early on as she implores unseen powers to unsex her if it will give her strength. Macbeth’s sudden resolve, somewhat ambiguous in most plays, clearly comes after his wife, who is caught in his arms, presses his forehead to hers in an embrace. This ingenious directorial decision alone argues for a performance of this rendition of Macbeth on a bigger stage. The idea that Macbeth and his wife are, whatever their internal resolve, subject to outside maneuvering is startling and under-used.

Too good not to mention is the obligatory comic relief, which emphasizes the story’s otherworldly angle. The porter in the production is more than funny as she idly contemplates the lot of the farmer, equivocator, and tailor, each of whom drop down from the ceiling as gingerbread men strung on wires. Instead of inviting the unfortunates into hell, she swallows them.

Babes with Blades has created a captivating production, supported by strong performances in the roles of Macbeth, Lady Macbeth, and, to some extent, Macduff. Heckman and the Blades crew tell the story of Macbeth as one of otherworldly influence, not internal struggle. Fortunately, audiences today can understand, maybe as well as Elizabethan viewers, that after all the gory confusion is over, sometimes it turns out that everyone was being coerced by indifferent, malignant powers.