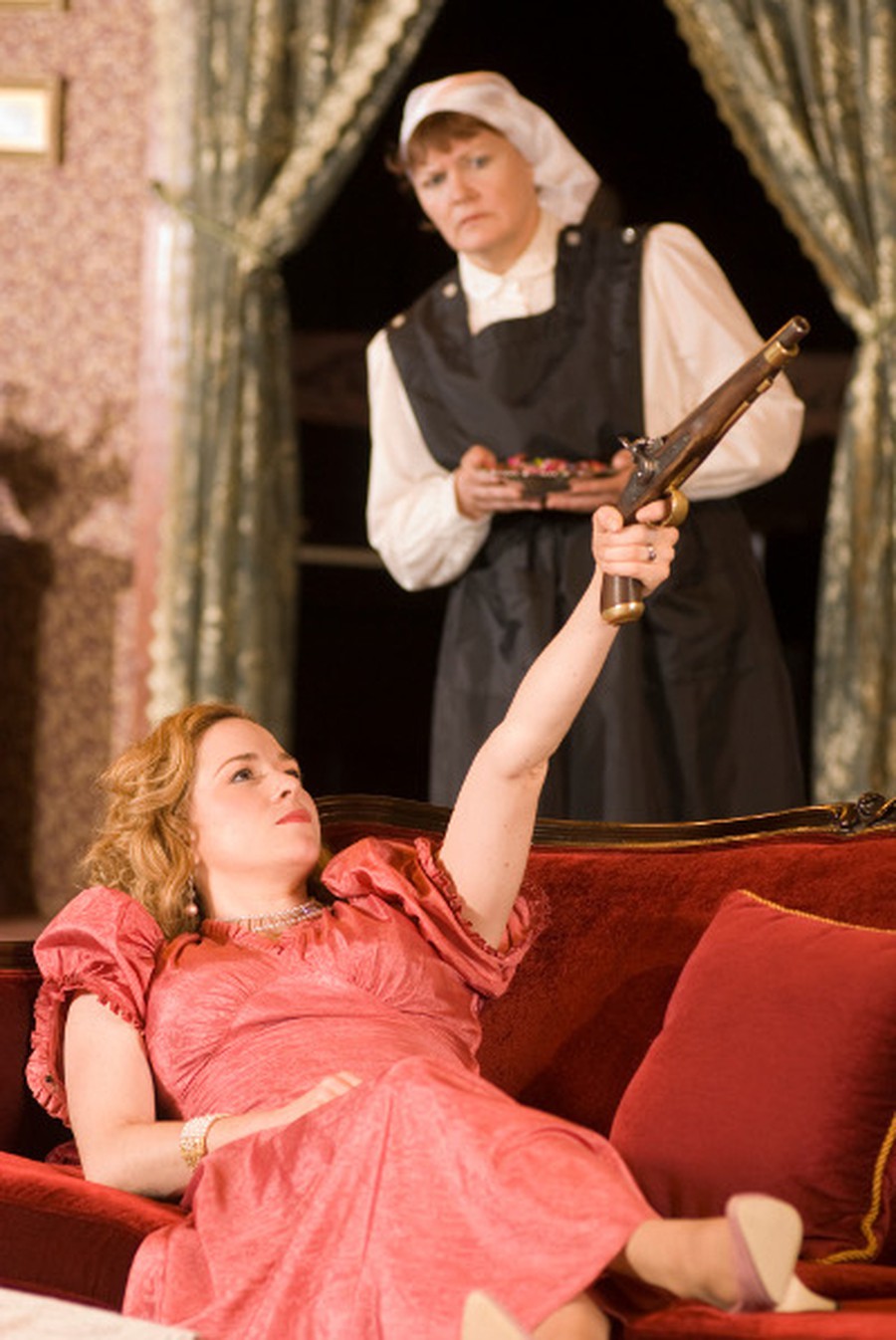 The Raven Theatre’s adaptation of Hedda Gabler, Henrik Ibsen’s modernist classic about the moral ambivalence and absurdity of upper-middle class society, vacillates between moderately compelling and excruciatingly conventional. While its modern setting and handful of excellent performances elevate it above cloying melodrama, the poor turns by the two leads ultimately sink this ambitious adaptation.

The play begins just after Hedda Gabler returns from her honeymoon with her husband, Jorgen Tesman. As an aspiring scholar, Jorgen has big dreams for his future, but despite his ambition, it is clear that Jorgen has fallen well short of Hedda’s expectations. Things get even more complicated when Jorgen’s academic rival, Ejlert Lovborg, arrives in town. His arrival, along with the revelation that he is in the process of writing his magnum opus with his lover Thea Elvsted, touches off a storm of intrigue and jealousy that ends with the downfall of Lovborg, Tesman, and, ultimately, Hedda herself.

Bonus points go to playwright Jon Robin Baitz as well as director Michael Menendian for situating the play during the Roaring Twenties, rather than the relatively distant 19th century. Beyond simply injecting the play with a modern atmosphere, this temporal shift significantly changes how the audience engages with each character.

Unfortunately, most of Raven Theatre’s performances lack the emotional power Ibsen’s characters require and fail to let modern audiences into the complexities of Ibsen’s drama. As the bored and unhappy newlywed Hedda Gabler, Mackenzie Kyle delivers flippant witticisms that would make even a stone-cold critic chuckle. But her frenzied performance doesn’t amount to a consistent interpretation for her character. Only her surface-level motivations emerge clearly—her explicit dissatisfaction with her husband and with her equally open expectation of a luxurious life.

As the play nears its end, however, one gets the impression that Kyle is trying to cram in a life’s worth of brooding pathos to make up for the bratty and uninteresting socialite she evokes. As she plays with her father’s pistol, she resembles more than anything a naïve child playing with her father’s power tools, rather than a disturbed, disappointed woman fascinated by violence.

Ian Novak’s performance as her inadequate and self-pitying husband, while satisfactory in the sense that it creates at least one source of motivation for Gabler’s dramatic actions, comes off as too buffoonish. It is difficult for the audience to find any sympathy for him because he simply does nothing to help himself and incessantly complains about how he is deprived of what he deserves.

The play’s redeeming moments arrive with the intense and sympathetic performances of Symphony Saunders (Thea Elvsted) and Ian Paul Custer (Eilert Lovborg), which manage to move the audience without crossing the line into melodrama. When Hedda’s actions slowly cause the breakdown of their codependent relationship, one cannot help but feel immense empathy for the only two characters that strive to preserve whatever good exists in their lives.

Despite the emotional force of these actors’ performances, they can’t make up for the absence of apparent motivation in the other performances. Nearly every character must be taken at face value, something that vastly undermines this attempt to bring Ibsen’s genius to a modern setting.