Insanity haunts the women of The Walls

Written by veteran playwright Lisa Dillman, The Walls is the culmination of a five-year collaboration between artists investigating madness and creativity through words, design, and historical research. The result is nothing short of stunning. 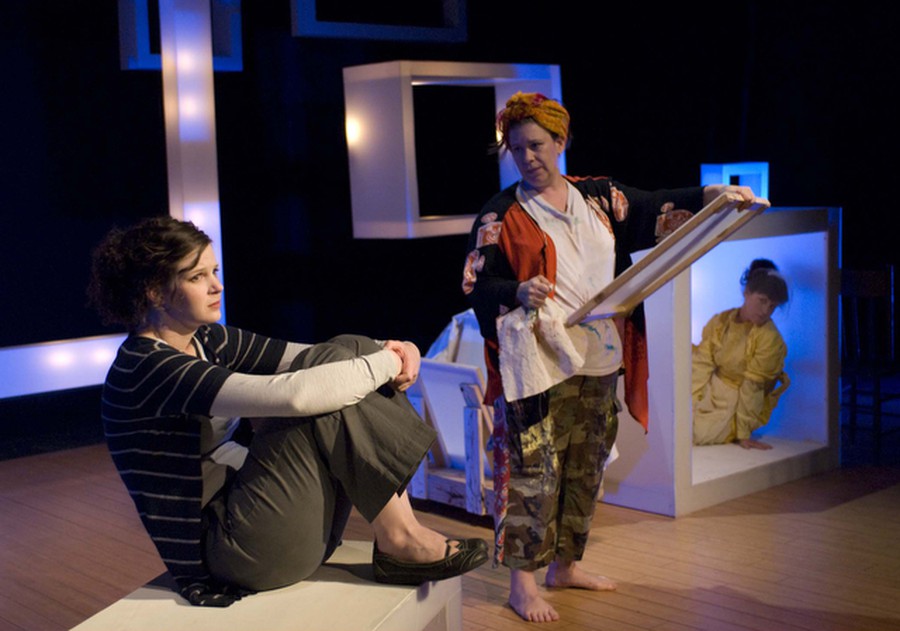 From Charlotte Perkins Gilman’s short story “The Yellow Wallpaper” to the memoir-turned-blockbuster Girl, Interrupted, mental illness has proved a productive topic for feminist inquiry. The Walls, the latest production by Chicago women’s theater group Rivendell Theatre Ensemble, explores female insanity in all of its tragedy and beauty. Written by veteran playwright Lisa Dillman, this premiere show is the culmination of a five-year collaboration between artists investigating madness and creativity through words, design, and historical research. The result is nothing short of stunning. Rivendell thoughtfully transforms the black box of Steppenwolf’s Garage Theater into a hectic mélange of female insanity.

The Walls stages the all-too-familiar intersection between academic study and the hardships of life. Carrie is a young woman writing the unspoken history of female insanity through the lives of women who have been chastised and locked away for their erratic behavior. Carrie takes her inspiration from the life of her own mother, who was diagnosed with mental illness when Carrie was a teenager. Carrie’s way of dealing with her mother’s condition, and with the fear that she too may one day exhibit symptoms, is to study women who have struggled with mental illness within the confines of an unsympathetic society.

While the play’s main narrative focuses on Carrie as she struggles to accept her mother’s illness, it is interspersed with vignettes portraying two of the women Carrie studies. Rivendell’s actors emerge from the window-like structures on the set, offering fierce glimpses into their lives. A Victorian woman pricks her wrists with sewing needles as a secret method of calming her emotional paroxysms. A wife furiously launches herself at her husband and suffers isolation from her family for decades. These moments paint a forceful and intricate picture of women whose strength is stretched to the limit by the demands of society.

At first, the picture that The Walls creates through its array of characters resembles the picture that Carrie is attempting to create by writing a book about insanity. Both projects synthesize the lives of suffering women in an attempt to rectify their neglect and censure. This sort of project is inherently problematic because even though it debunks an understanding of insanity as something terrifying, pathetic, or punishable, it asserts its own vision as an alternative—a vision that is questionable in other ways. Is it really fair to lump all women’s mental disorders into the same narrow categories?

But The Walls finds strength in its ability to dissect and question its own project. Enter Lisa, a funny, free-spirited woman who serves Carrie coffee as Carrie taps away on her iBook. Once Carrie learns that Lisa has been treated for mental illness as well, she insists on interviewing her. In a trite but satisfying twist, Lisa ends up teaching Carrie lessons that she could never have expected.

Even though this production manages to tackle a complex topic while developing compelling characters, I often wished that more time were spent developing the relationships between them. More focus on the main narrative surrounding Carrie, her mother, and Lisa and less focus on the historical women would have made Carrie’s abrupt personal growth more believable and consistent. Another misstep is an attempt to tie the play to Gilman and the aesthetic value of insanity with a mystical lady in a yellow dress who occasionally slinks around the stage; this well-intended homage risks appearing awkward and heavy-handed.

Ultimately, The Walls succeeds in portraying female madness as both beautiful and perilous. Much of its success is due to the fact the Rivendell Theatre Ensemble’s work is so solid: The cast is talented, the set is intimate, and the language of the text is subtle and captivating. The production is part of Steppenwolf’s Visiting Company Initiative; let’s hope that Steppenwolf offers this opportunity to equally worthy companies in productions to come.