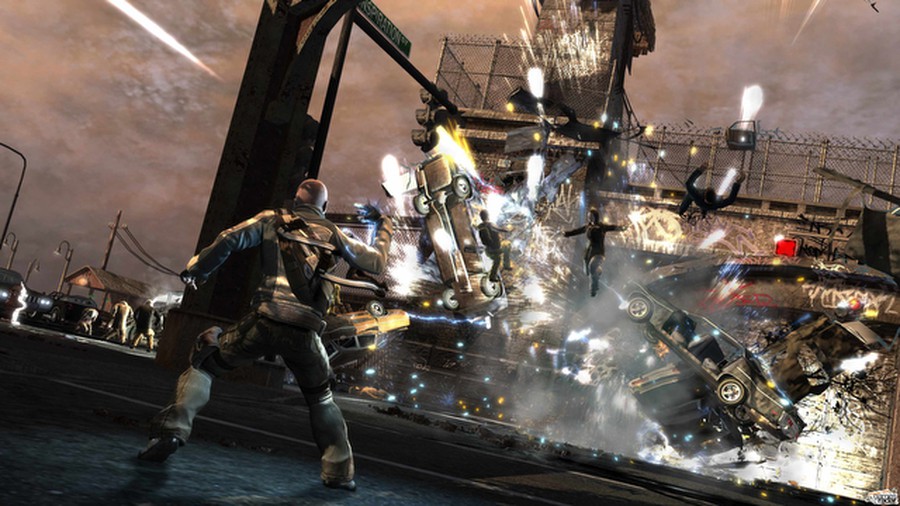 “Save what’s left—or destroy it all,” is the challenge posed by Sucker Punch Productions’ inFamous. Combining moral dilemmas, platforming action, and an open-ended world, inFamous redefines the superhero game from the ground up, creating an exhilarating and unique experience.

To be sure, inFamous is a strange beast in both storyline and game play. You play Cole, a bicycle courier with an attitude who wakes up one day in a crater amidst the ruins of a city. It turns out that the package you were delivering contained an electro-magnetic device that exploded, killing droves of your fellow citizens but imbuing you with spectacular lightning abilities. In the ensuing days, the city is quarantined as gangs and a plague exterminate whatever pathetic life roams in the aftermath of your fateful delivery. And, to make matters worse, you’ve been labeled the terrorist responsible for creating this hell on earth. With the help of your manga-reading buddy Zeke and the Feds, you’re tasked with saving the city and clearing your name. The downright bizarre story is told in comic book-style cut scenes, and feels like a case of style over substance.

In inFamous, you are given the choice to play either Hero or Anti-Hero, either saving or destroying the city. The moral dilemmas play out in a similar way as in Mass Effect, yet the consequences of your actions make themselves felt most clearly in the abilities Cole can have, as in Star Wars: Knights of the Old Republic. The moral choices are fairly interesting, even though most of them boil down to killing someone or letting them live.

InFamous joins the ever-increasing ranks of “Frankengames” that mish-mash game play elements from other titles. Cole’s platforming and edifice-scaling borrows directly from Assassin’s Creed; the lightning abilities are straight from Star Wars: The Force Unleashed; and the over-the-shoulder perspective recalls Gears of War. The gameplay is fast and merges all of the platforming and action elements excellently. Greater experience purchases more powerful abilities, and collectible bomb shards scattered across the city control the amount of power you have. Cole can recharge by sucking power out of power generators, cars, and people.

The amalgamation of different styles of gameplay makes inFamous a bit jarring at times, yet unique and charming. The game’s staple three to four types of missions don’t even utilize all of the abilities you are given, nor do they combine all of the game’s elements smoothly. Also, the frequent sidetracking necessary to clear large arenas of enemies has the tendency to become repetitive. That being said, I had a great time playing all the different game styles, despite the feeling that there was something not quite right about it. If you are looking for an experience that brings together the best elements of your favorite games while providing a unique gaming experience, then inFamous is definitely worth looking into.