Dombrowski discovers wisdom in the Reg: not in the books, but on the walls 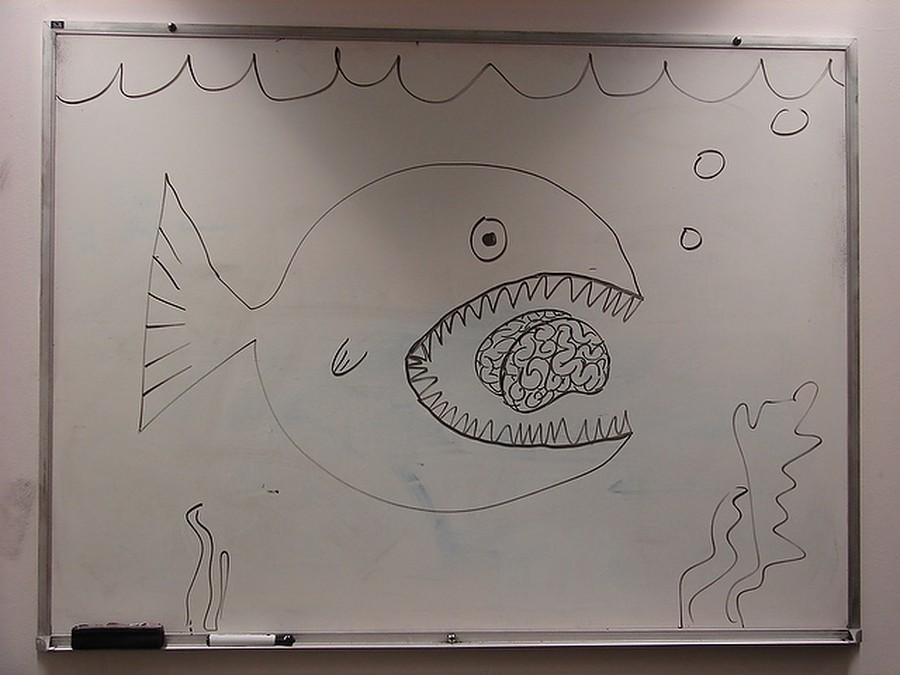 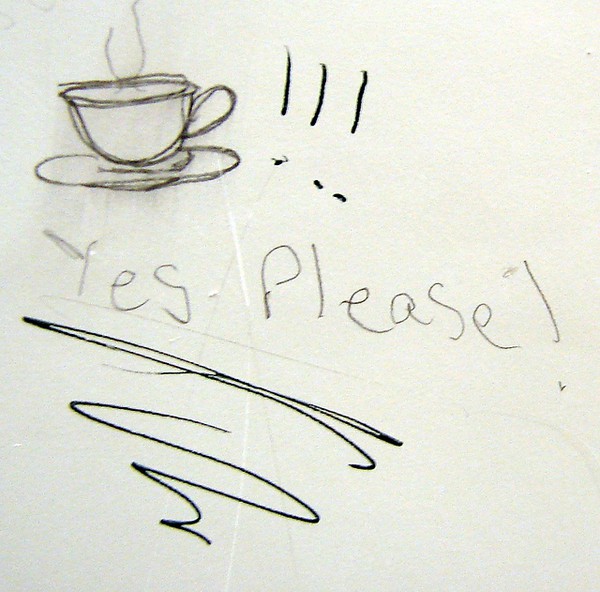 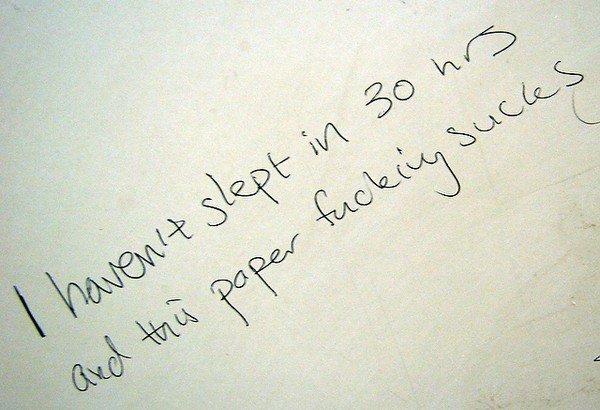 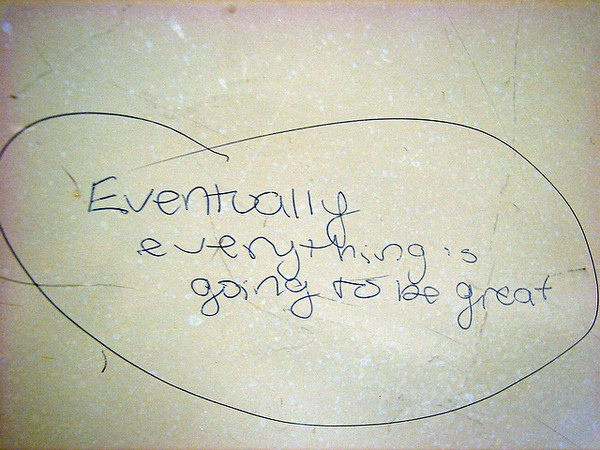 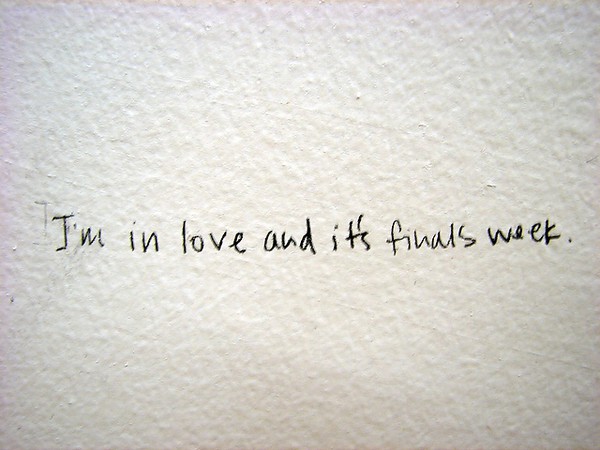 The most honest representations of a university are typically those that aren’t commissioned. It was the cheeky advice and vulgar wisdom written on the walls of the Regenstein stacks that spoke to Quinn Dombrowski, and which she captured in her book, Crescat Graffiti, Vita Excolatur: Confessions of the University of Chicago. As a coordinator for NSIT, she wandered the halls of the library, searching for the random beauty of anonymous scrawlings. Between her walks through the stacks, she was able to spend some time talking to the Maroon about her artistic process, her own relationship with the Reg, and the evolution of the University’s culture over the years.

Chicago Maroon: When you started taking these pictures of the graffiti in the Regenstein Library, was there ever an intended audience?

Quinn Dombrowski: When I started there wasn’t really an audience at all. For the last two years now, I’ve been taking at least one picture every day of just sort of random beauty. When I got a job for NSIT, and my office was in the Reg, I was wandering in the book stacks and saw all the graffiti that was written there and thought, “Wow, this stuff is really interesting.” So I just took pictures of it like I took pictures of everything else. I sort of watched it evolve, and I kept coming back and taking more pictures until I started doing it routinely. I started posting pictures of them online on Flickr, ever since I started taking them. The thought occurred to me that maybe one day I might want to put them together in a book. I had gotten a lot of feedback from alumni and current students that they really loved the Flickr site. In an article in the LA Times blog over last summer, there was a lot of attention drawn toward the Flickr site, and I said, “Alright, now is the time to make this book, and we’ll see if people are interested.” It turns out people have been.

CM: Was there a particular reason you began taking pictures in the Reg?

QD: Well, I happened to be working there. So I would wander out there during my lunch breaks.

CM: What was your method for finding the graffiti? Or where did you find the most meaningful pieces?

QD: For a while it was just the book stacks. I discovered pretty quickly that the fourth and fifth floors are the best places to go, the third floor sometimes, the second floor not so much. So, it was pretty much the stacks for the first six months or so. Then I started going down to the A-level, when they reopened it as the 24-hour study space, to see what people had been writing on the white boards. There was a while where everyday I would go down and take pictures of the A-level. At one point, I think probably only three or four times over the course of the last couple years, I’ve gone into the study carrels, which tend to evolve much more slowly than the stacks. I would just spend an entire hour or so going through all of the study carrels one by one, looking for graffiti and taking pictures.

CM: What are a couple of your particular favorite pieces?

QD: “I’m in love and it’s finals week,” is definitely a good one. “Go to Italy. Be a cobbler” seems to have really hit the mark with a lot of people. It’s definitely the number-one piece of reused graffiti. It’s been on a bunch of different blogs, mostly people anxious about their careers.

CM: When you were taking and compiling all the photos you took for the book, was there a criterion for which graffiti was chosen?

QD: When I first started doing it, there wasn’t a final product in mind. I’ve been going through everything the last couple days to compile a data set, and I don’t really remember this, but the evidence shows that I only took pictures of things that I thought were interesting. I definitely omitted a lot of things in the beginning. So, there’s an incomplete record from summer 2007 and the few months following that. But ever since I started going routinely, I take a picture of more or less everything.

CM: Not all the graffiti shown in your book is congruent with the student image this school loves to promote. Did your own perspective on the University of Chicago student change at all as you put together the book?

QD: Not really. You know, I was a student here. I’ve been there; I’ve done that. It’s been a long time since I was under any illusions that the glossy, sort of magazine cover of U of C is all there is. It’s been interesting to see how some of the culture has changed over time. When I was a student here, I never would have imagined that there would be frat graffiti in the Reg, but lo and behold, there has been frat graffiti in the Reg, and that’s been kind of interesting to see.

CM: Have you ever personally contributed any graffiti to the Reg?

QD: Never. Not once, seriously. The book cover was written on my bedroom wall. There was one time I was tempted to. There was a really sad piece of graffiti, “I’m too invisible for anyone to care,” and I wanted to write back to that one, but to be able to have the credibility to say, “I’ve never written on the walls,” I didn’t.

CM: Your Web site says you’ve taken a picture every day since August 29, 2007. What is your favorite subject matter?

QD: Just random beauty. Things left on the sidewalk, just really anything. I have probably pushing 40,000 pictures on Flickr. I upload pretty much everything I take. They’re all creative commons licensed, and people use them on newspapers, blogs, whatever.

CM: As a self-proclaimed techie/nerd, do you prefer The Empire Strikes Back or Return of the Jedi?

QD: Definitely The Empire Strikes Back, although I still clung to my childhood preference of Return of the Jedi until recently when I watched all of the three movies again. The original versions, not the bastardized ones.