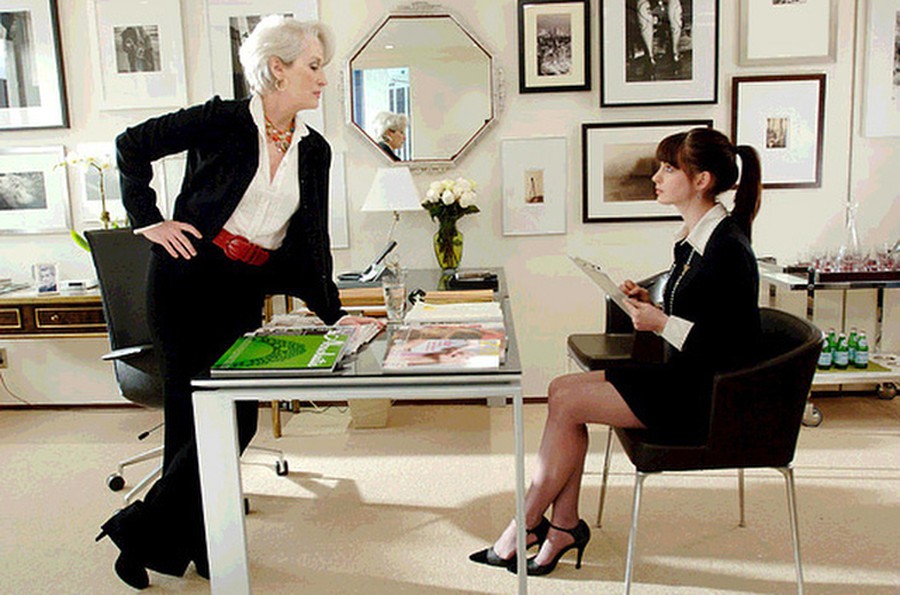 While weary, hungry, and squished aboard an international flight, I recently re-watched The Devil Wears Prada. While I enjoyed the film the first time I watched it, perhaps it was just my mood, but I had several complaints the second time around. At the beginning of the film, the fashion industry is portrayed as an evil empire. Eventually the main character starts to see fashion as relevant and positive, but soon the idea of fashion as a malignant, corrupting force is re-asserted. The film’s overall message is that the industry will cause you to change (never for the better) and damage all of your non-work relationships (because only in fashion must you sacrifice a personal life for a professional one).

Obviously, I disagree with most of these claims. Fashion—and even more importantly, style—is all about expressing oneself. In many ways it’s one of the most practical arts because, like architecture, we live in its creations. And unlike our interactions with most forms of art, we get to take an active role by purchasing and assembling outfits, instead of just admiring from afar.

“But wait!” you cry. “The Devil Wears Prada is primarily about entertainment and pretty clothing. It doesn’t present itself as an in-depth look at the fashion industry.” And you are correct. So, in response, I’m taking this week to promote three interesting, revealing, and honest documentaries about the world of fashion.

Marc Jacobs & Louis Vuitton: This documentary by Loïc Prigent follows Jacobs in his role as creative director for Louis Vuitton. But it is not just about him. The film also focuses on his role as a designer, examining both his creative and business sides. Ultimately, what makes Marc Jacobs & Louis Vuitton so great is its clear, informative narration by Prigent. Jacobs is a fascinating character, and the merging of a designer known partly for his “stinky rat” collection with a company of iconic class is a somewhat bizarre but wonderful premise in need of thorough, expert explanation. This fascinating story is accompanied by charming music and footage.

Valentino: The Last Emperor: Unlike Marc Jacobs & Louis Vuitton, this film is truly a character piece. Who is Valentino Garavani the man, and what makes him Valentino the legend? The film follows the designer through a year of his life, starting in 2006 as he prepares for a retrospective on his 45 years of design. At the center of the film is both Valentino’s relationship with his partner, Giancarlo Giammetti, and his relationship with beauty, especially beauty through design. This documentary is wonderful partly because it follows Valentino in one of the most pivotal years in his career, but also because it gives the viewer such intimate insight into the designer.

The September Issue: And, finally, the documentary that examines what The Devil Wears Prada cheekily alludes to: Vogue and Anna Wintour. However, what drives the film is not an exploration of the magazine or its editor-in-chief, but the constant struggle between art and content. Anna Wintour represents content. As editor-in-chief, she must always maintain a focus on practical issues and the magazine overall. In contrast, Grace Coddington (currently Vogue’s creative director and one of its former models) represents art. Coddington concerns herself with beauty and little else. We see her look for inspiration, create art, and defend her work. In the end, it’s not about victory but reconciliation. The magazine must find a way to balance both, and luckily for the viewer the juggling act is riveting.

If you love beautiful things and have any interest in the industry and designers that produce them, then watch these films. If you hate fashion, watch these films. They are neither a defense nor a critique, but rather an exploration of one of the most controversial industries in today’s society. Love it or hate it, it can’t hurt to know more about the art we live in.