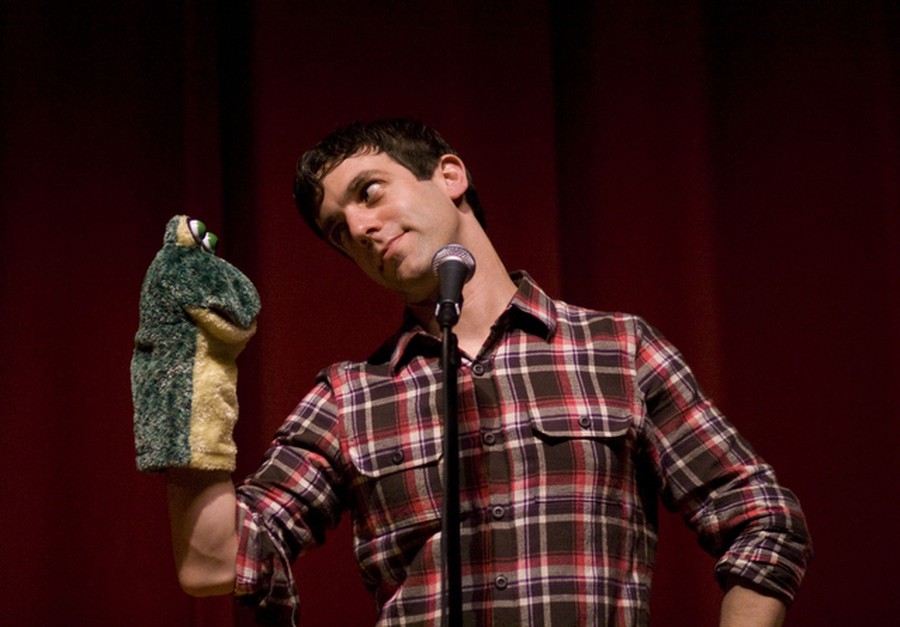 B.J. Novak would like everyone to know that he is changing careers. B.J. Novak: comedy writer, stand-up comic, and actor is now B.J. Novak: children’s puppet master extraordinaire. He graced our beautiful Mandel Hall stage last Saturday clad in a red-checkered shirt and black jeans, looking oh so adorable as he struck hammy poses with Shy Puppet, his green frog friend.  Shy Puppet was part of an extended sketch involving Novak trying to convince the frog to come out of his shell and tell a joke. (Dear B.J., why don’t you use a turtle puppet?) The skittish puppet, who forgot to take his Prozac, trembled with fear amid a sea of U of Cers as he struggled to work up his courage, which produced a collective “Aww” from the audience. Novak was forced to return Shy Puppet to his briefcase though, as he was on the verge of fainting from a panic attack.

Shy Puppet is just one ingredient of Novak’s mixed alternative comedy routine. Novak’s humor is strongly rooted in sharp, conceptual sketches rather than on-the-fly improvisation, and veers more toward humorous prop-driven bits than 90 minutes worth of punch lines. His onstage persona is an amiable showman whose execution and delivery is understated, tongue-in-cheek, and a little self-deprecating.

Shy Puppet is an example of a performance-based sketch that doesn’t quite work. It’s cute as a button, but shies away from tickling our funny bones. B.J. Novak headlines as a comedian, but instead of making me laugh with that bit, he just made me want to ask for his phone number.

As a Harvard alumnus and former writer for the esteemed Harvard Lampoon, Novak is more famously known for his writing and acting for NBC’s The Office (as if that needed telling). Possibly a more capable writer than performer, Novak has a talent for intellectual humor with clever wordplay, observational comedy, and historical and pop culture references, which works perfectly with the cultural- and media-savvy college crowd. Commenting on everything from his gripes with Google Maps and iTunes, to Ben Franklin and life in show biz, Novak opts for relevance over provocation.

Another section in his routine involved prop-based performance mixed with a string of punch lines. After a member of MAB brought out a trash bin onstage, Novak read jokes from index cards, depositing the loser jokes into the bin based on audience approval. The jokes were a mixture of wordplay and intentionally bad jokes, with a touch of mild indecency. However, this bit could do with a little updating, seeing as how I recognized some of these jokes from YouTube clips of a performance he did in 2007. Regardless, the trash bin lent the bit a sense of insecurity and pessimism that aided in its execution. Bombing is the ultimate fear of a comedian, but this sketch essentially embraces audience boos.

Ahh yes, the dreaded “boo.” And crickets. We gave opener Dan Mintz a lot of crickets last Saturday. His deadpan, self-deprecating persona was a little too apathetic for U of C tastes. This resulted in placid chuckles or awkward laughs, depending on whether his tone took a bland or sexual direction, respectively. Mintz found out the hard way that U of Cers really don’t want to know about his penis, and Holocaust jokes still aren’t funny.

At the close of the show, Novak offered to accept audience questions. To paraphrase his answers, he loves the original British version of The Office. Acting opposite Steve Carrell in The Office means that 95 percent of the day’s footage is wasted on laughing, and the other 5 percent is what makes it to air. “Diversity Day” is his favorite episode of The Office he’s written. Finally, he kind of likes his character Ryan on The Office, whom he described as a “deluded, searching, aspiring hipster,” who is always looking for a lie to tell himself. Ryan became a blonde as punishment for Novak filming Inglourious Basterds. Speaking of Basterds, his favorite moment was acting opposite Christoph Waltz’s vicious Hans Landa while seated next to Brad Pitt. Lastly, he refused to say whether Phyllis is as responsible in real life as she is on the show.