Smart Museum joins The Darker Side 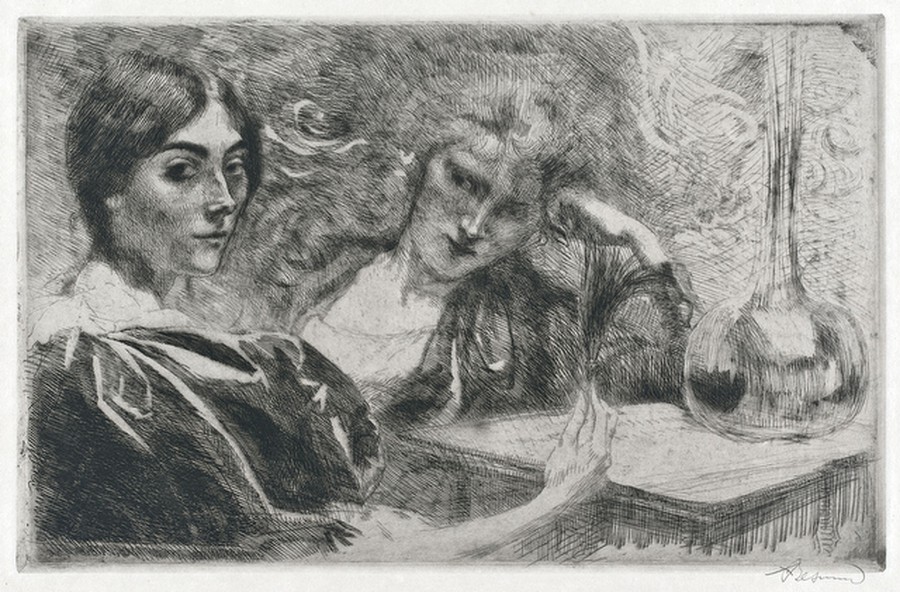 Courtesy of the National Gallery of Art, Washington

While most people associate late 19th-century art with bright and blurry impressionist paintings, the Smart Museum’s newest exhibition, The Darker Side of Light: Arts of Privacy, 1850–1900, focuses on more ghoulish Parisian works from the same time period. Instead of Claude Monet’s depictions of dreamy sunrises, think instead of nightmarish dead bodies ascending into the sky.

The exhibit presents works in several different media, including sketches, paintings, and sculptures. Most are small, black-and-white pieces, although there is the occasional burst of color. Featured artists include James Ensor, Max Klinger, and Anders Zorn. More familiar names like Victor Hugo, Edouard Manet, and Edgar Degas are also present, though they are represented by pieces wholly different from their usual repertoire. Equally dark quotations accompany many of the works, including ones from Edgar Allen Poe. Insights from Charles Baudelaire appear on almost every wall.

All of the pieces’ dark subject matter and their colorlessness allows for a sense of aesthetic cohesion in the exhibit. Works are organized into collections that represent different levels of hell, beginning with Nature and ending with Violence and Death. In between, we find sections on Creatures, Obsession, Abjection, the City, and Reverie. Although Nature sounds innocent enough, its landscapes are brooding and melancholy. Other sections depict morphine addicts and rapists.

Most of the images stand alone, while others are part of a series from the same artist. Although most of the pieces are part of a traveling exhibit, the Smart was able to provide supplemental works, making The Darker Side of Light a unique experience.

Many of these works also used to be privately owned, an environment the museum strove to replicate in its presentation. Entering the exhibit, one goes from a bright, wide space to a smaller one with walls painted in dark, saturated colors to recreate the feeling of a smaller, more private area. Given the very public nature of museums, it is impossible to perfectly simulate the original privacy surrounding these pieces, but the Smart does succeed at creating some sense of intimacy.

All of the pieces in the exhibit depict troubling content in a truly beautiful way. When examined individually, each seems like the result of a particular artist’s inner turmoil at a given moment, but displayed together the works reveal a very real, more obscure movement. The Darker Side of Light hints that, during a time of bright pastorals and beautiful portraits, 19th-century artists also collectively expressed a fascination with the dark, the depraved, and the melancholy.