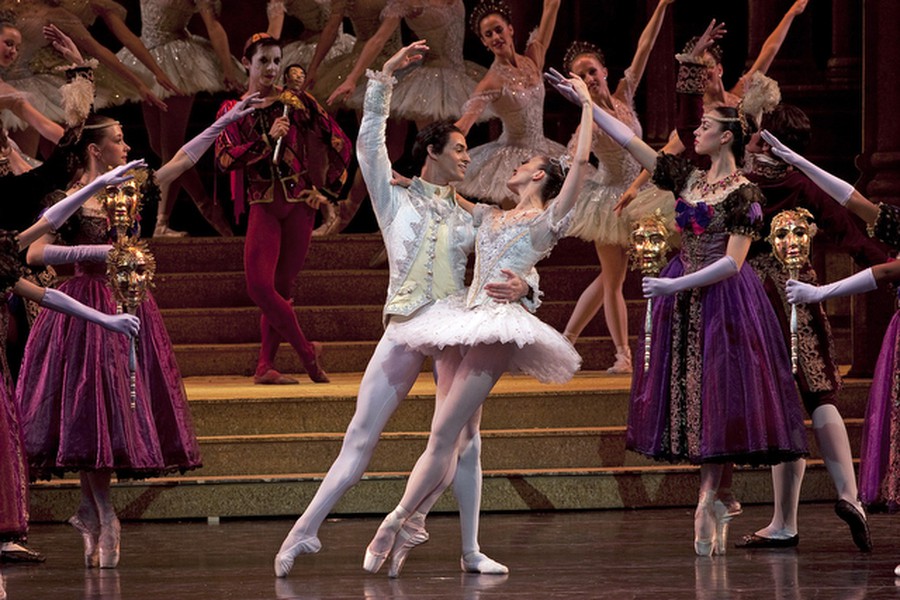 So long, glass slippers—Cinderella is sporting point shoes alongside her broom and pumpkin this year. This past Wednesday, the Joffrey Ballet began its run of Cinderella, famed choreographer Sir Frederick Ashton’s portrayal of the classic rags-to-riches tale.

Sir Frederick Ashton’s version varies in some significant ways from Disney’s more popular interpretation of the fairy tale. This rendition leaves no room for the evil stepmother, and the fairy godmother first appears as an old hag who, of course, transforms into a long-legged graceful dancer. Another big change—certainly not present in the Disney version—is Cinderella’s step-“sisters;” the two are played by male dancers whose sole form of communication is pantomime.

One aspect of the fairy tale that remains untouched is its charm and romance. While Cinderella never sings about “the dream that you wish will come true” at the end of the production, her dreams do, in fact, come true. Spoiler alert: The happy couple leaves the stage walking hand in hand as gold glitter falls from the ceiling.

The Joffrey Ballet is known for its firsts: It was the first dance company to perform at the White House, appear on television, and to be on the cover of Time Magazine, in addition to being the basis for a major motion picture. Following this tradition, the company has the exclusive rights to perform Sir Ashton’s renowned rendition of Cinderella. Joffrey’s Artistic Director Ashley C. Wheater worked with Sir Ashton during his time at The Royal Ballet in London, and feels that “the Joffrey upholds the full ingenuity, sincerity, and authenticity of his brilliant work.” The show was originally performed in 2006, but found its way back to the Auditorium Theatre, by popular demand, for only nine performances.

The show consists of three acts featuring nearly forty different characters. It runs about two-and-a-half hours, in addition to two separate intermissions. Joffrey Ballet’s official orchestra, The Chicago Sinfonietta, accompanies the performance with Sergei Prokofiev’s score. The orchestra begins the show and sets the mood for each dance. Ballet obviously relies solely on music and dance, but both the orchestra and the dancers live up to the challenge. The 42 dancers that form the Joffrey Ballet Company clearly show their dedication to the production in their expressions and performance.

Cinderella as a whole, though, does seem a bit long. Gorgeous costumes and enchanting sets add to the magic of each scene, yet many scenes tend to pass slowly with the soothing, melodious music, and some of the solo pieces seem rather superfluous. If you are in pursuit of sure-fire entertainment, a better choice would be watching the Disney version, or perhaps Ever After. If, however, you consider yourself a ballet connoisseur or desire to see a unique presentation of this classic fairytale, Joffrey Ballet’s Cinderella awaits you.