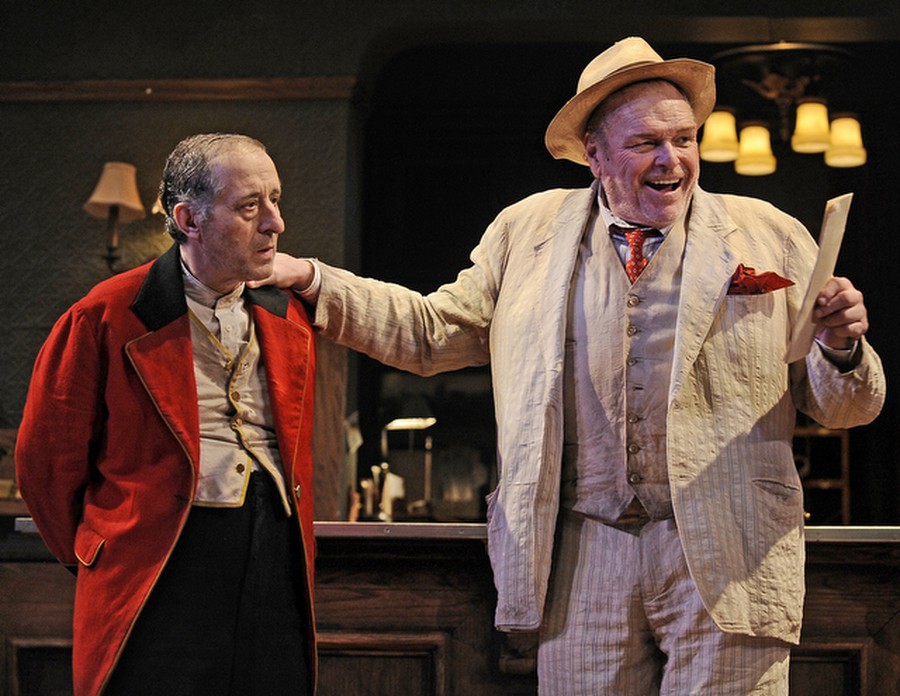 The Goodman Theatre presents a double feature with Hughie and Krapp’s Last Tape, a duo of one-acts by Eugene O’Neill and Samuel Beckett, respectively, that are a treat for theatergoers who enjoy philosophy laced with black humor. O’Neill’s Hughie tells the story of Erie (Brian Dennehy), a lifelong gambler who feels lost and alone after losing his gullible and attentive buddy, Hughie. Krapp’s Last Tape depicts a night in the life of an elderly man who reflects on his past while listening to taped memoirs he made years ago. These plays address difficult questions, such as how we deal with death and regret, but they do so in a way that is profoundly funny.

Both plays place emphasis on comedic elements that break up an otherwise somber tone. In Hughie, Brian Dennehy manages to make his Erie offensive, amusing, and pathetic all at the same time, portraying a man both fallible and likable. The interactions between Erie and Charlie Hughes (Joe Grifasi)—Hughie’s replacement—provide poignant humor, allowing the audience to laugh at the awkward exchanges between a storyteller and a listener who doesn’t care to listen. Other bittersweet moments ensue as Erie deceives himself into believing that he is younger and more promising than he really is.

In the one-man show Krapp’s Last Tape, Dennehy takes on an entirely different but equally engaging persona: Krapp, a bitter old man with a bone to pick with his former self. The opening scene, involving Krapp and a banana, is rife with hilarious moments and, though it seems to stretch on for far too long, is a fine example of silent acting and a tribute to Dennehy’s talent. Other amusing moments include Krapp mocking a recording of his younger self. But these moments also pose a difficult question: How do we live with regret without hating ourselves?

Each play ends wonderfully, but it is hard to say if this is due to the acting, the playwrights, or a combination of the two. Hughie gives the audience a perverse sense of resolution with a thought-provoking combination of satisfaction and concern over Erie’s fate. Whether Erie’s life has improved or whether he is hiding from his problems are things left for the audience to decide. Krapp’s Last Tape leaves the audience on the brink of tears with an all-too-real image of what it is like to have loved without expressing that love.

Performing these two one-acts back-to-back, Dennehy showcases his versatility as an actor. He appears just as comfortable playing a New York City bachelor who longs for girls and glory as he is playing an elderly, alcoholic Irish man with a broken heart. The show is worth seeing, if only to watch a masterful actor transform entirely from one character to another.

Both plays feature sparse sets, which puts pressure on the actors to convey a sense of place without many props. For the most part, this is done quite well through elegant staging. Director Robert Falls has blocked Hughie so that Erie gradually approaches Charlie Hughes as the play progresses, which is an appropriate compliment to the increasing intimacy between the two characters. Director Jennifer Tarver uses almost every inch of the stage in Krapp’s Last Tape—an impressive accomplishment in a one-man show. Contrary to what one might expect, Tarver does not have Krapp sit in a chair the entire time, even though the character is working at a desk during the entire play. Instead, Krapp moves in and out of the room and all around the desk during the course of the hour. This directorial choice allows Brian Dennehy an impressive range of motion, which helps to keep the show from becoming static or boring.

The two plays present the viewer with differing but realistic images of men who have failed to become what they would like to be, and the combination of these stories forces the audience to consider how the characters should reconcile with their pasts in order to be happy with their present selves.

The contrast between the two plays highlights the complications of this deeply philosophical question. Krapp mocks himself and his past bitterly, yet he seems very unhappy in the present. He eventually ends up only listening to tape recordings that recount the memories that please him, skipping over the portions of tape that upset him. Erie, though not entirely successful at pretending that he has met his personal standards, sometimes deceives himself into believing this is so, and in those blissful moments of forgetfulness, he appears happy. This dark contrast poses disturbing questions: Can being honest with ourselves cause us too much harm? How many lies do we tell ourselves to survive?